The 9th-ranked Louisville Cardinals look to keep their undefeated season alive inside the Carrier Dome this afternoon against Syracuse and their high-powered offense. Here's all the game day information you could possibly desire.

Share All sharing options for: Game Day: Louisville At Syracuse 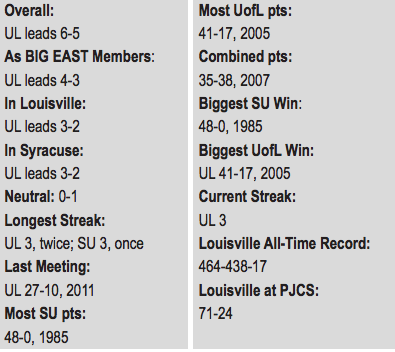 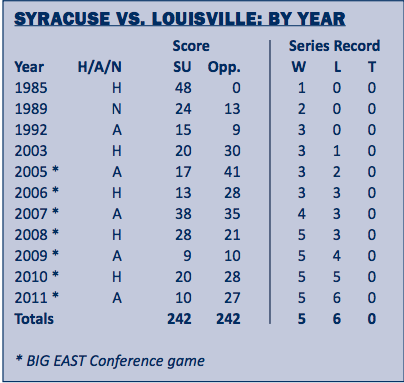 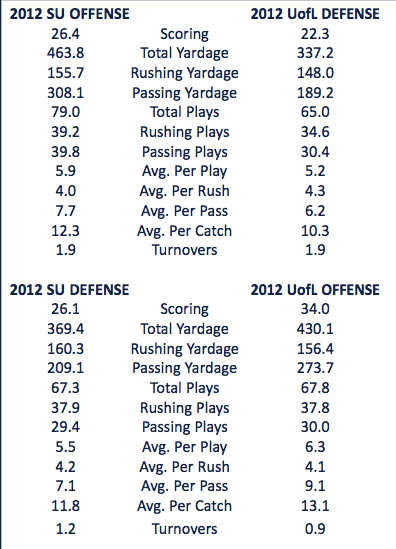 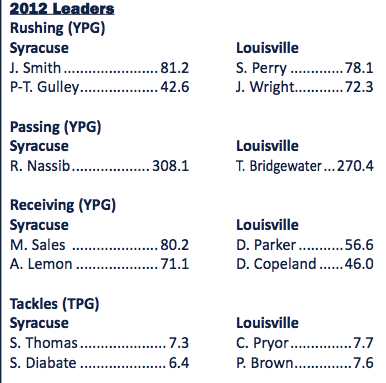 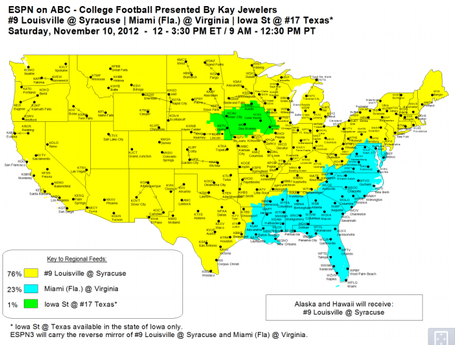 I think this is the first time all year where my nervousness has outweighed my excitement. I really, really don't want the perfect ride to end.

Feel free to go back and "Excitement Level" as "Nervousness Level." But don't re-read this explanation. That'd be really dumb.

Pregame Meal: More than a few folks have out-of-town plans this weekend (another reason I'm nervous), so there will be no organized meal. I'd kill for some coffee and doughnuts, but that might be more effort than I'm willing to put forth. Probably going to be coffee and a bacon, egg and cheese bagel from McDonald's.

I'll make sure to let you know.

Third straight week. Would like to make it fourth...you know, after the bye week...so five str--or four out of five weeks, I guess. Whatever, don't make me explain stuff like this when you know what I'm talking about. We coud have been halfway through the bold prediction by now.

I told you this was going to happen.

Titus Teague Playing Alert Level: Piggy Pink (He got hurt and it's all my fault becuase I made the TTPAL include a prediction last week)

--Louisville is one of just six unbeaten teams remaining in Division-I (FBS, whatever).

--Saturday will mark both Senior Day and centerpiece of Syracuse's Homecoming weekend for the Orange football team.

--Louisville has won the last three meetings with Syracuse, including a 28-20 win in the last visit to the Carrier Dome in 2010. Louisville is 3-2 all-time in Syracuse.

--Syracuse has not defeated Louisville since 2008, when they beat the Cards 28-21 in the Carrier Dome.

--Dating back to last season, U of L has won its last six road games.

--The Cardinals have fallen behind in all three road games this season. They've been outscored 52-43 in the first half on the road, but have shut out the opposition 31-0 in the third quarter.

--One time Kyle Kuric like went completely berserk on Syracuse when they were the No. 1 team in the country and we were playing our last game inside Freedom Hall. It was wild.

--The Louisville receiving corps features six players with at least 15 receptions, including four with more than 20 catches. Devante Parker leads the group in yards (509 and touchdowns (5). Damian Copeland has a squad-best 33 receptions.

--Louisville is outscoring Big East opponents 45-14 in the third quarter.

--In conference play, Teddy Bridgewater is completing 67.0 percent of his passes and throwing for 1,300 yards with 10 touchdowns. In four league games, Bridgewater is averaging 325.0 yards through the air and has thrown just one interception in 120 attempts.

--Louisville is 22-4 under head coach Charlie Strong when scoring 20 or more points.

--Louisville has scored at least 20 points in 12 straight games.

--Louisville is the only Big East team that four-year Syracuse seniors have never beaten.

--By forcing four more turnovers on in the win over Temple, the Cardinals are +9 in turnover margin and rank 14th in the country in that category.

--Nationally, Syracuse is 20th in the NCAA in passing, 15th in first downs, and 26th in total offense.

--"This is the best football team that we will have played so far. Even with a tough out-of-conference schedule, I would say Teddy Bridgewater is the best quarterback that we will face so far this season. He's a playmaker." --Syracuse head coach Doug Marrone

--"It's going to be a good test for us. It's a team sitting there that needs to become bowl-eligible." --Charlie Strong

--"It's special for me. It's my last game in the dome. I've been in there for the last five years. I would say there's a little more extra emphasis on being a little bit more prepared, more ready to go. But at the same time I've got to make sure I don't try to do too much." --Syracuse quarterback Ryan Nassib

--"(Bridgewater)'s a good quarterback on film. He delivers the ball on time. He extends plays with his feet. But we've faced some really good quarterbacks over the course of the season, so we're prepared for anything. We can turn this around." --Syracuse nose tackle Jay Bromley

--"I just want us to continue to play with a chip on our shoulder and I want our players to feel like they are being disrespected and then they will. They'll continue to get better." --Charlie Strong

--"This is the reason why we play this game. So we're going to take it as a challenge and go out there and play our hearts out." --Syracuse wide receiver Marcus Sales

--"They have big-time receivers and playmakers. We have to fly around and cause distractions for the quarterback. We just have to go out and play." --Syracuse safety Shamarko Thomas

--"If they don't want to play you, then you can never show just how good you are and who you are. That's why it's important for us to just continue to play good each week so then, at the end, if we're very fortunate to get in one of those bowl games against a really good SEC or ACC (team) or whomever. Then we'll be able to show who we are." --Charlie Strong