Lillian Rose Weiter and co-pilot Poopa Weiter are heading out of town on the WeiterVille Express. The destination? Anywhere where they don't know about last night's game.

Bobby Petrino did not mince words or try and soften the blow after last night's game.

This is the worst.

After last night's game, Louisville now has 20 lost fumbles on the season, which is the most in the FBS by a large margin. No other team has more than 14 (Virginia Tech and Kentucky).

The talk that Lamar Jackson lost the Heisman Trophy last night is absurd and baseless.

With this Louisville blowout, Lamar Jackson's Heisman probability goes from 100% down to 100%. There's no one else

He may have opened the door a crack, but at this point, nobody's even in agreement as to who is directly behind him.

According to Nate Silver, Louisville's chances of making the playoff fell from 41% to 1% last night. There's a Dumb and Dumber quote that most people would insert here, but I don't have the heart to do it today.

Sports Illustrated does the same thing.

Louisville volleyball coach Anne Kordes has announced that this season will be her last with the program.

"It has been an honor and privilege to have had Anne guiding our volleyball program for the last six years," Louisville athletic director Tom Jurich said in a release. "I wish her and her daughter, Mary, the best as they embark upon the next chapter in their lives. I am exceedingly grateful to Anne for her dedication to the University of Louisville, and I'm excited to see what the future holds for her. We will miss her enthusiasm and vigor around our department, but as a former student-athlete and coach at U of L, she will remain a Cardinal forever."

She said in a release from the school that she is leaving the profession for family reasons.

"It's with extremely strong emotions that I am announcing my decision to end my career as a Division I volleyball coach," said Kordes. "The last 20 years in this business have been a dream come true. I am honored to have had the opportunity to work for so many wonderful people during my time in coaching, but especially Tom Jurich at Louisville. He treats his athletic department like family and I could not be more thankful to him. There are aspects of every job that can be challenging and at this point in my life I am finding it hard to be the mom I want to be to my daughter because of the grind and travel of the recruiting season. There is no way around it if you want to be successful as recruiting is your life-line. My struggle isn't the work, it's the work out of town. I consider myself to be lucky because of what I have been able to experience as a coach, especially at the University of Louisville. I also consider myself lucky because of what I get to experience as a mom."

Jurich says he plans to embark on a national search to find Kordes' replacement.

UCLA defeated Colgate 4-2 last night in the first round of the NCAA men's soccer tournament, which means Louisville will host the Bruins in round two Sunday at Lynn Stadium. First kick is scheduled for 5 p.m. Here's the updated bracket.

Ill-timed clunkers continue to deny Louisville of its ultimate goal.

Luke Winn's SI power rankings are back, and he has Rick Pitino's team at No. 8.

Always nice to see the younger players paying homage to their predecessors, like Joel Embiid breaking out a perfect Hakeem Olajuwon Dream Shake for the Sixers . . . or, on the college level, Louisville's Donovan Mitchell evoking former Cardinal Russ Smith's famed 1-on-5 fastbreak—from March 2013 against Syracuse—with a similar attack against William & Mary. Watch them, back-to-back:

(As an aside: Power Rankings Good Vibes go out to Russ, one of my favorite college players ever, who's being publicly thrown under the busby his current coach in Turkey. The guy needs to learn, like Rick Pitino did, that the longer the leash—and the bigger the stack of waffles—you give Russ, the better he gets.) 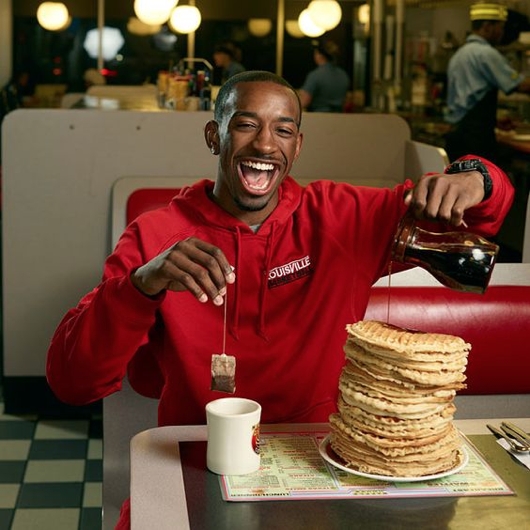 This is the worst column I've ever read.

Regardless of how NC State's season ends, Dave Doeren is expected to return in 2017.

Fox Sports has five reasons why Lamar Jackson is still the overwhelming favorite to win the Heisman Trophy.

This was the only good thing that happened last night.

@CardChronicle if you're going to lose, at least do it with @ChickenKnowles3 on the field pic.twitter.com/EkSeJCP1gZ

Rick Bozich says Louisville's meltdown at Houston was worse than Miami in '04, Rutgers in '06 or Clemson earlier this year.

There are 128 teams that play FBS football. After last night's game, Louisville ranks 128th in fumbles lost, 128th in penalties, 126th in sacks allowed, and 125th in turnovers. Those are remarkable numbers for a team that is 9-2 and won seven of those nine games by 30 points or more.

If you are an ultimate frisbee fan, the U of L club team is hosting a tournament this weekend. Here are the details:

We are hosting a 10 team ultimate tournament at the Fern Creek Optimist Club Soccer fields.

Link to the schedule, if you are interested: Schedule

With less to play for, John Clay of the Lexington Herald-Leader wonders if Louisville will be motivated for its annual rivalry game with Kentucky.

Former U of L commit Frankie Hughes is off to a fantastic start at Missouri.

Momentum in Austin could be swinging in favor of keeping Charlie Strong.

The Sporting News makes the case for keeping the five foul limit in college basketball, and not moving it to six as some are proposing.

Some frustrations boiled over on the Cardinal sidelines at one point last night.

Sophomore receivers Traveon Samuel and Jaylen Smith got into an altercation in the second quarter. The Cardinals were trailing 24-0 at the time, and teammates, including Jackson, stepped between the two to break it up. The loss essentially ended Louisville's hopes of making the playoff.

Afterward, the Cardinals said the altercation wasn't anything major.

"You know how brothers fight, man," Jackson said afterward. "Families always do that. We got back together. Everybody's talking. It wasn't nothing."

Safety Dee Smith said, "We could have reacted better. Some of the teammates didn't react the way they should have. Some did. We just didn't get on the same page tonight."

Players and coach Bobby Petrino acknowledged the team was frustrated on a night it made countless mistakes, including 15 penalties and three turnovers, and yielded 11 sacks to Houston.

"On the sideline, there was definitely frustration, and it grew," Petrino said.

Said Jackson: "[The frustration] was kind of high at first. But we've got to move on. Can't dwell on it."

Players said the sideline altercation is not an issue they expect to linger beyond Thursday night.

"That's just the competitive spirit that we have as a team," senior running back Brandon Radcliff said. "We're all brothers. We just wanted to go out there and win the game. They just want to tell those guys, 'Come on, man, we know we can do it.' We're brothers. We argue with each other, we're just trying to get each others' minds on the right path and go out there and get that W at the end."

Multiple Cardinal players blamed a "lack of focus" for the team's performance Thursday night, which is something I'll never understand.

And finally, listen to R&R from 3-6 today and then try and distance yourself from sports for the rest of the weekend.