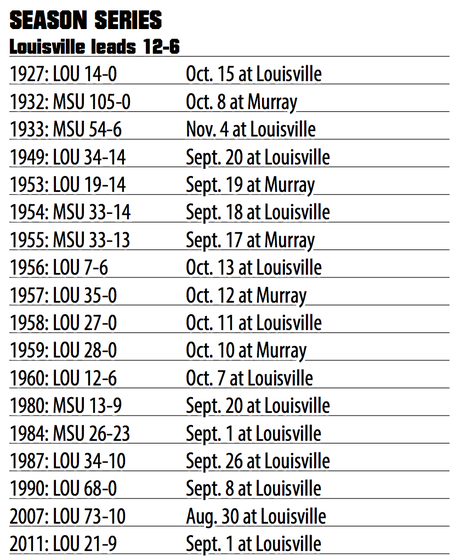 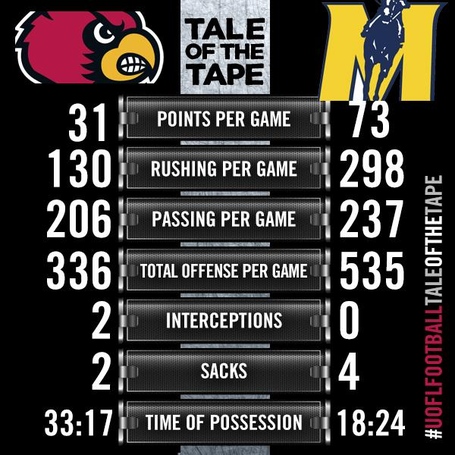 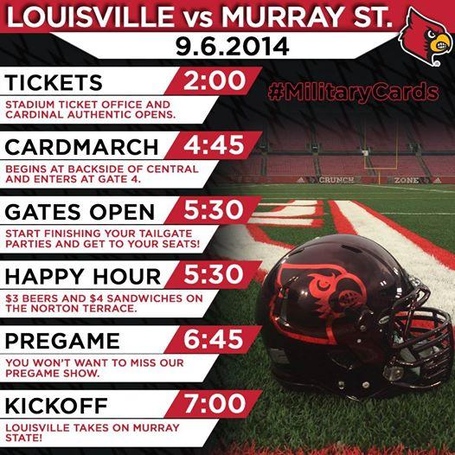 Hatcher's offense is a very basic spread offense that tries to speed up the game. First year starter CJ Bennett threw for five touchdowns in the season opener but only didn't have great numbers outside of that. The Racers played with a short field for the majority of the game and Bennett finished with only 167 passing yards while completing 59% of his passes. Bennett won't do much to impress you with his arm, but he can extend a play with his legs. Hatcher might look to spread Louisville's defense out to alleviate some of the pressure Todd Grantham is sure to bring against a fairly undersized offensive line.

The Racers will run multiple running backs throughout the game led by All-Namer Pokey Harris. An undersized back, Harris is at his best in open space. He and Marcus Holliday do well hitting the hole quickly and taking advantage of the wide splits of the offensive line. The best comparison I can think of is the old Air Raid offense at Kentucky or Washington State with Ryan Leaf. The lineman are so spread out that it creates an automatic hole to run through. Smaller backs that can make a guy miss work well because they typically don't have blockers that can get to their man at the second level. Hatcher hasn't had a feature back in the last few years and he rotates guys in to keep the offense fresh and moving as quick as possible.

There will be a lot of very small, very quick guys playing outside for the Racers. 164 pound wide receiver Janawski Davis is the main threat in the passing attack, but the philosophy of the offense is to spread the ball around as much as possible. The Racers do have some size out wide, but the players that would typically be considered tight ends split out wide as passing targets. I think that Hatcher will use as many quick passes as he can to counteract the pressure Todd Grantham's defense brings. The offense is fairly balanced for a spread attack, but there are plenty of plays that are just "stand up and throw". Bennett gets the ball, turns, and fires to the receiver that is not being pressed. We could see a lot of that Saturday.

The offensive line isn't relied on to do much other than not get beat off the snap. This is not a complex offense in any sense of the word. Guards aren't asked to pull much in the running game and the tackles aren't asked to create a solid pocket for the quarterback. Splits and communication are important to execute the offensive philosophy for the most part. With the passing game so focused on getting the ball out quick, it will be on the line to make sure that they don't let Louisville's lengthy defense get their hands up to deflect passes.

The Racers run a base 3-4 defense with an adjustment into a 3-3-5 nickel package. It's hard to say how they will lineup against the Cardinals due to the lack of talent on Union's offense. The Racers stuck with their base defense a lot even when Union spread them out. As much as there was to say about the offense, there's not much to speak of on the defensive side of the ball. The front seven is very undersized and pretty slow for such a small group. Outside Linebacker, Travis Taylor is the top returning tackler and he stands out on film. He lines up 10 yards deep in zone and he will pack in tight next to the defensive end on short yardage.

The defense as a unit gave up way too many big plays to a NAIA school and Chris Hatcher made note of it on his weekly show. It would be one thing if they gave up garbage points or the defense had lapses when the score got out of hand, but they allowed big plays in the first quarter. Even the first play of the game was a screen play for a first down. The 3-4 they employ isn't an aggressive type of defense like ours, but they will blitz occasionally. Outside of that there wasn't much of a showing last week. If the team doesn't tackle much better or cover much better than they did, that score could be flipped on them with the Cards hanging a big number on them.

It's football just five days after the last football, and that's cool, but I don't get to be there, and it's also a little bit harder to fake it for a game like this than it has been in past years where the overall schedule has been less exciting. Still, there are things we all want to see that this game is going to allow for. It's the necessary bunny hop before the full spring off the diving board.

I'm going to be at a wedding...in case you hadn't gathered.

Predicted Star of the Game: Will Gardner

Dude's gonna throw for 300 yards in a game for the first time.

FCS players typically bring it, so this was a little disappointing.

It's still #BBN no matter what!

That quote and that Twitter name, they, uh, they do not mix.

--Murray State is the team responsible for the most lopsided defeat in Louisville football history, a 105-0 loss in 1932. Remarkably, the Cardinals had defeated the Racers by a score of 14-0 just five years earlier.

--Louisville is 23-1 all-time at home under Bobby Petrino. Dating back to 2003, Petrino has won 19 straight games at Papa John's Cardinal Stadium.

--Murray State wide receiver Jalen Harrington is a Louisville transfer. Harrington played tight end and linebacker at U of L, making seven tackles in 2012 and catching a pass in the Sugar Bowl win over Florida.

--Louisville has won seven straight games, the third-longest streak in the FBS.

--Last week's 73-point effort made this the third straight season, and the fourth time in five years, that the Racers have scored 70 or more points in at least one game.

--Louisville has scored in 174 straight games, the third-longest streak in the ACC. The Cards have not been shutout since the 2000 season.

--Louisville running back Michael Dyer will not play for a second straight game.

--Bobby Petrino is 13-1 in the month of September as Louisville's head coach.

--Louisville has won 11 straight non-conference games. The last time the Cards fell to a non-conference opponent was the 2012 Belk Bowl. Ironically, Louisville's opponent in that game, NC State, is now U of L's league mate in the ACC.

--Murray State was picked to finish sixth in the OVC before the season by the league's media members.

--Louisville is 24-3 over the last two seasons, the fifth-best record in the country over that time.

--U of L announced Friday night that today's game is a sellout.

--"The biggest thing for us to get to the game fresh, both physically and mentally. We need to make sure we can concentrate and do things right. I told the team this will challenge our maturity." --Bobby Petrino

--"It's going to be tough. Those guys are good. I don't think everybody understands how big a jump playing a team like that is. You look at number 94, their defensive end outside linebacker - I mean he's bigger than everybody on our team." --Murray State coach Chris Hatcher

--"We strap on our pads the same way they strap on their pads. With this quick turnaround, anybody can be a good match for you." --Deiontrez Mount

--"You only get so many opportunities to play in front of your home crowd. This is another opportunity we have, a night game. We know our crowd will be out there, fired up and cheering for us. We will have the edge. We will run out there prepared to put on a performance." --Garrick McGee

--"(Miami's) in the past. Right after the game, come the next morning, you have to get ready for another opponent. We'll have our hands full." --Todd Grantham

--"I'll always be a fan. But going into this week, I'm not a fan." --Murray State WR and Louisville transfer Jalen Harrington

--"You just stay out of the media, for the most part. No offense, but you just can't have people pat you down on the back. You can't listen to that stuff." --Deiontrez Mount on how to stay focused

--"Whenever you play up a level, that's where a lot of times the glaring weaknesses are - when you play your special teams. We take great pride in ours, and you know we played down a level last week and you can see the big difference in the special teams. That changed the course of the game very quickly. So when you play a game like this you hope to neutralize that aspect because that can change the game in a hurry." --Murray State coach Chris Hatcher

--"You would hope it played out that way and you're able to get guys in and get experience, but we've just got to worry about playing well." --Bobby Petrino

The short week might make this an effort unsuited for display in a football museum, but it'll still be a surprise if the 4th quarter isn't a time for the youngsters to get some much-needed experience.