A reminder that Red/White scrimmage tickets are now officially on sale.

Steve Jones of The Courier has a good Q&A up with new U of L commit Antonio Blakeney.

Are you thinking that Terry Rozier will probably have a chance to go pro next year?

That's what a lot of people are saying. That's what he's saying, I mean, that's what Coach is saying. So hopefully, but if not, we'll just play together.

What was Coach Pitino's reaction?

He was very happy. He called me right away. I didn't even tell any of the coaching staff. I just kind of tweeted it out there, and they saw it surprisingly. ... Pitino was like, 'Dang, man, you got to tell me stuff like that.' He was excited. ... They knew I wanted to come to their school. They didn't know when I was going to commit or anything, but they knew I wanted to be a Louisville Cardinal.

What do you think about the class Louisville has with yourself and the other three guys - Raymond Spalding, Deng Adel and Donovan Mitchell?

State of the U has Louisville at No. 3 both in the Atlantic Division and the ACC overall in their first set of conference power rankings.

Louisville already defeated UCLA and now stares down a showdown with Oregon in the latest season of Commie Football.

The thing to like most about Bridgewater isn't necessarily his play, but the play of those around him. He gets the benefit of playing with the best running back in football, one of the fastest receivers and a left tackle that went to the Pro Bowl in 2012.

He also only has to beat out Matt Cassel, a quarterback who was literally benched for Brady Quinn two years ago.

Bridgewater was once thought to be special enough to be the number one overall pick before a bad Pro Day sent his stock tumbling. He was the last selection of the first round, but looked good in the preseason and should be starting in Minnesota within the first month of the season. The Vikings get the Patriots, Saints and Packers among their first five contests, and head coach Mike Zimmer may lose his patience with Cassel.

That should get Bridgewater under center soon, but playing with Adrian Peterson, Cordarrelle Patterson, Matt Kalil, Kyle Rudolph and Greg Jennings should help him look pretty good too.

And a Teddy feature from the Cadillac folks:

The 24th-ranked U of L volleyball team swept Tennessee State this afternoon in  the first game of this weekend's Active Ankle Challenge presented by The Galt House. The Cards are back in action tonight at 7:30 when they'll take on former conference rival Cincinnati inside Cardinal Arena.

The Sporting News looks at the Antonio Blakeney commitment, which they agree is pretty cool.

A reminder that tomorrow's Card March is set for 4:45: 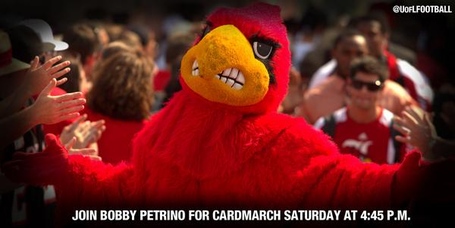 I realize it's going to be hard to duplicate the intensity of Monday night (feels weird to be talking about a game tomorrow when the last one was part of the same work week), but let's not let the drop-off be so severe that it has a negative effect on the players. We know they paid attention last week, so let's not act like they won't be paying attention tomorrow.

Passing on Louisville remains one of the worst decisions in Big 12 history, and they know that now.

Watching Louisville football the next few years is going to be tough for Big 12 fans. The Cardinals could have been theirs. A conference in desperate need of football depth passed on Louisville, a solid gridiron program and a stalwart athletic department.

When West Virginia jumped to the Big 12, Louisville was anxious and ready to come along, but the Big 12 didn't want to expand past 10, mainly for financial (meaning, selfish) reasons. When Maryland left the ACC for the Big Ten, Louisville was a quick fix for the ACC.

And so Labor Day night, there was Louisville waxing Miami 31-13 and making us watch on what we had missed.

Virginia's schedule, which includes two games against Louisville, should make it tough for the Cavaliers to repeat as ACC hoops champs. 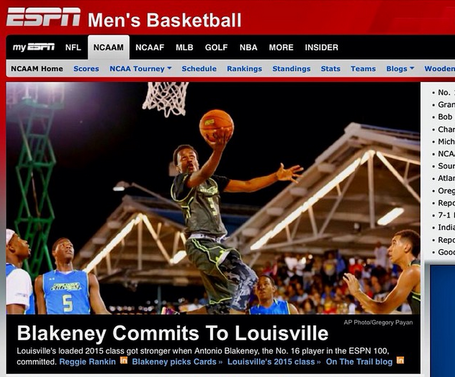 The 11th-ranked Louisville swim team is about to start life without national champion Joao de Lucca, but things might wind up being better than you think.

Eli Rogers on UofL WR's sharing the wealth, "We the AFROS... so you never know who's going to show up on game day."

It's a huge Friday night for Trey Smith, the most recent player to commit to play for Bobby Petrino at U of L.

I had no idea that Chuck Todd of NBC's "Meet the Press" was the son-in-law of the late Benny Russell, who played quarterback at Louisville in the '60s. Todd referenced the connection in a recent interview.

Maybe Murray State can make things interesting against cross-state rival Louisville. The Cardinals have a short week to prepare for the Racers after routing Miami in an emotional opener that marked Bobby Petrino's return to the school and their first game as an ACC member. Murray State's roster is littered with transfers from FBS schools South Carolina, Washington, Kentucky, Marshall and, yes, Louisville. "It'll challenge our maturity," Cardinals coach Bobby Petrino said.

The C-J's Jeff Greer refuses to answer Spike Lee's greatest question in his latest "Ask Me Anything" segment, which might as well be titled "Ask Me Anything, but I Might Not Answer You." Dick.

The only game in the college football world tonight is an ACC battle(?) between Pitt and Boston College. Here are pregame reads from Cardiac Hill and from BC Interruption.

An interesting and encouraging couple of quotes quote from Dominique Brown in this piece from Eric Crawford.

After taking over at its own 49, Brown carried it on three of the next six plays, including a 15-yard touchdown run that put the Cards up 21-13. Then, up 24-13, U of L got the ball with 9:30 left on the clock and Brown got the ball on five out of the first six plays, running for 22 net yards. After a short breather, he came back in and got four more handoffs, taking U of L from the Miami 26-yard line down to the 10 to set up the final touchdown.

"It's great when you have that relationship with the coaches that you can give them the feedback and let them know what you want to do and they listen to the players," Brown said.

In all, Brown carried 20 times for 95 yards in the second half. It's even more impressive when you consider the Cards ran just 35 plays in the half.

"He came to me and said, 'Keep giving me the ball, coach, and I'll find way to get it in the end zone,'" Petrino said. "And I respect that. And he certainly did. He's tough and big and physical."

Brown said he wasn't sure what running back Michael Dyer's status was all week. He said the training staff didn't really relay that to the other running backs, but he didn't worry about  it. He said he knew the Cards were going to run the ball plenty.

"He like his running backs," Brown said of Petrino. "When they think of Petrino offense, they think you're going to pass the ball, but we learned in the second half today that we're going to run the ball. Once we get in that rhythm, we just keep feeding it."

You might remember that Brown wasn't exactly thrilled when he was taken out of the game in the midst of running all over Central Florida last year. Senorise Perry then promptly fumbled the ball deep in Cardinal territory in what might have been the biggest play of the game. 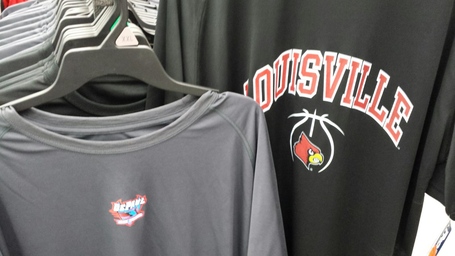 Can you guys even spell Active Ankle Challenge-opening victory? Also, this picture was taken at a Meijer in Alexandria, Ky. Dead serious. There was one single DePaul shirt in the midst of all this Louisville gear. Fantastic.