The long, violent, poorly timed and alcohol-fueled annual dance that is the Louisville/Kentucky rivalry gets underway Friday night when the U of L women's soccer team hosts the Wildcats at 6 p.m.

The Cards, who will be looking to break a three-game losing streak against their arch-rivals, are asking all fans heading out to Lynn Stadium to wear red. UK has won each of the last three rivalry games by a final score of 2-0.

Fans attending will be treated to dollar beers between 5-6 p.m., and there will be free hot dogs for the first 500 students through the gates. Regular tickets are as affordable as $4. 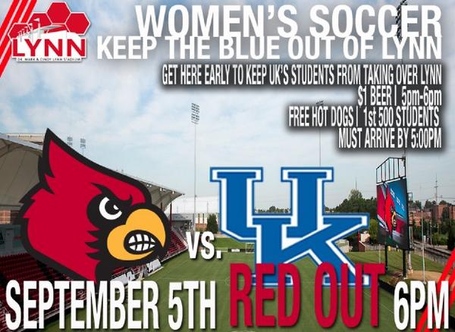 Louisville, meanwhile, enters tonight's match with a record of 2-1. The Cards' lone slip-up remains a 2-0 defeat at Illinois on Aug. 24. The program will be looking to top the record crowd of 5,100 that saw them defeat Ole Miss last Friday night.

Immediately following the Cards and the Cats, the U of L men's soccer team will be hosting Cornell in a match that is tentatively scheduled to begin at 8:30. The Big Red will be making their season-debut, while the second-ranked Cardinals now suddenly find themselves a win and a UCLA loss away from becoming the No. 1 team in the country.

Let's hope it goes as well as the last time Cornell came to town:

Best of luck to both squads tonight, and make it out to Lynn Stadium if you can. The place is incredible.