Via Chris Nall, the CCBM makes its Budapest debut.

Spread Check: No sportsbook is currently offering a line on Louisville/Murray State.

Louisville checks in at No. 10 in Football Outsiders' first S&P Ratings of the 2014 season.

The Sporting News ranks Donovan Mitchell as the No. 18 player in the class of 2015.

Out of sight, out of mind often is a problem with the rankings of high school basketball players. Mitchell did not compete on the summer circuit in 2013 because of a wrist injury, so it maybe shouldn't surprise anyone that he barely registered on the lists of top prospects in his class.

Then everyone saw him this summer. Wow.

Mitchell is as athletically forceful as any guard his size in recent years. Some sports editors over the years have come to regard the word "explosive" as misapplied in the context of athleticism, but watch Mitchell with a basketball in his hands and try to think of another word that better describes him.

He gets most of his attention from being an absurdly athletic dunker, but the practical applications of that ability are not as important as his gift for dashing past defenders and using his long arms and powerful hands to finish through whatever traffic presents itself.

Mitchell is a capable shooter, as well. He is built to become an exceptional defender.

Although he is short for his position relative to the NBA level, he is strong enough and dynamic enough that he could, as Ben Gordon did a decade ago, defy that supposed limitation.

Drawing a 2.7 overnight rating, Miami/Louisville was the top game of the weekend on cable and the No. 3 game overall. Only ABC's doubleheader did better (4.1 for each game).

The latest bowl projections from ESPN have the Cards taking on Alabama in the Orange Bowl (Mark Schlabach) and/or facing Michigan in the New Era Pinstripe Bowl.

I'd give every penny I own if Luke Hancock could play here until he was 70.

First night as a grizzly.. Beard is going to have to make a strong come back.

Shots fired at Miami from U of L assistant and former Hurrcane star Lamar Thomas.

Devin Hester does not appreciate Harry Douglas reminding him that Louisville stomped Miami on Monday.

Louisville freshman middle blocker Maggie DeJong has been named ACC Freshman of the Week for volleyball.

Troy Nunes is an Absolute Magician pencils Louisville in at No. 2 in its first ACC power rankings.

Just one game into their ACC stay, and you're already seeing why the Cardinals were considered such a big addition to the conference. With a new QB and new coach, the odds looked stacked against them facing an experienced Miami team on Monday -- on national TV, no less. And yet, they rose to the occasion and picked up a huge, tone-setting win that suddenly lifts them near the top of the ACC pile. The Cardinals' defense was swarming and quick, and easily helped nullify its own offensive issues. This team appears to be for real, which should scare Syracuse fans.

Living Social has a deal for U of L ice hockey tickets today.

Louisville is No. 21 in the country when it comes to college football spending.

Jeff Walz has hauled in yet another top 50 recruit in Erin DeGrate from Waco, who attended the U of L football game against Miami and then committed to Louisville the next morning.

We all need to know about this...and own this.

Earl Clark worked out for the Spurs today, which (if he signed) would pretty much be the best thing ever, and also gives me an excuse to post this video (via Scott Dillon).

All right thanks man.

Louisville extended a scholarship offer to running back Delton Sands (Fort Lauderdale, Fla./St. Thomas Aquinas), who coincidentally(?) decommitted from Maryland hours later. Sands says he plans to take an official visit to U of L.

All Gorgui does is put up numbers. Big ones. 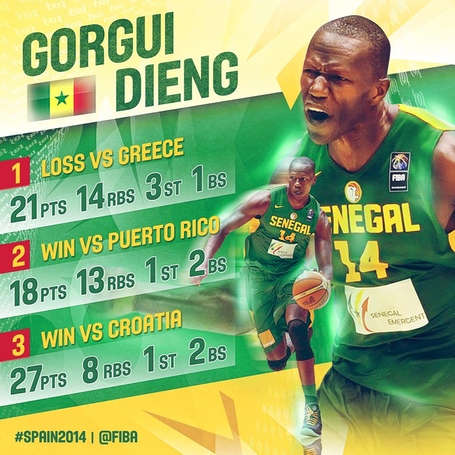 A really good read on Jake Smith from his hometown paper.

Both Will Gardner and the U of L defensive staff are receiving high-praise from Bobby Petrino in the wake of Monday's win.

"I think he did a good job, he had a really nice drive there in the first quarter. He executed in went straight down the field, he had a couple mistakes by not taking care of the football. You always wonder should you hit him in practice, but he has had three years since he?s been hit. We need to get him to get the ball against his body, keep his elbows in, and not carry it the way he did when they pressured him. A lot of the hits were caused of making the wrong call, we didn't block the right guy. He still has to get the ball against his body. You talk about poise and competitive spirit, the way he came out and played after those mistakes, I'm very proud of him."

It certainly helped having standout tailback Dominique Brown get off to a fast start as well, as he torched the Miami defense for 143 yards and a score in the win.

The Cardinals were shorthanded with an injury to All-American candidate DeVante Parker on the outside. However, seniors Gerald Christian (6 rec, 59 yds, 1 TD) and Eli Rogers (5 rec, 65 yds) were solid in filling the void.

Despite the loss of star power on the defensive side of the football this season, the Cardinals actually performed better than expected in the opener, limiting Miami to just 244 total yards. The team did a particularly good job against the Hurricanes' ground game, holding the team to just 70 net yards and standout tailback Duke Johnson to just 90 yards. The team recorded seven TFL and two interceptions in the win.

Petrino liked what he saw from the defense in the opener.

"I thought our defensive staff had a great plan and our players really did a nice job of understanding the plan and being gap-sound and tackling well," said Petrino. "You always worry about how you're going to tackle in the first game, but they went out and tackled really well. We didn't give them a lot of room - that was the big thing is we didn't give a lot of space. They had one big run when they actually drove the ball down there, but other than that, we didn't actually give a lot of space."

A quartet of Cardinal fans -- Brittnie Bramer, Emily Cecil, Joanna Erny and Kevin Henehan -- in Prague spent their day representing the Ville while cheering on the USMNT against the Czech Republic: 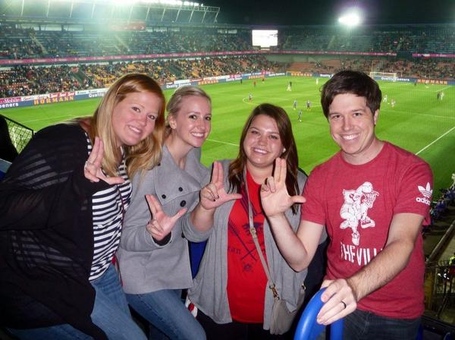 Lindy's takes a quick look at Louisville vs. Murray State.

State of the U attempts to stay positive after watching the Canes fall by 18 to the Cards.

How many ACC volleyball Freshman of the Week honors did you guys even bring home today? That's what I f---ing thought.