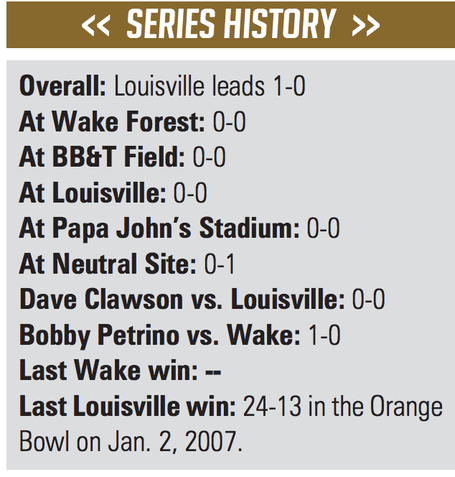 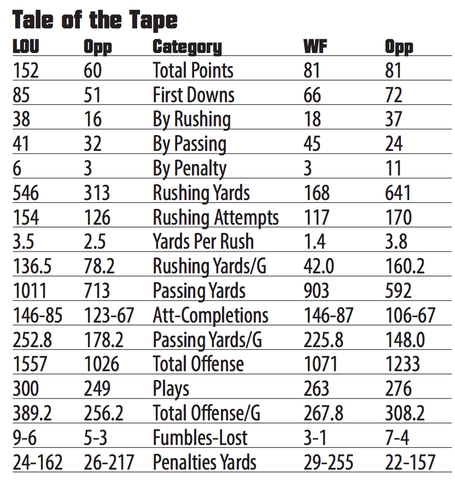 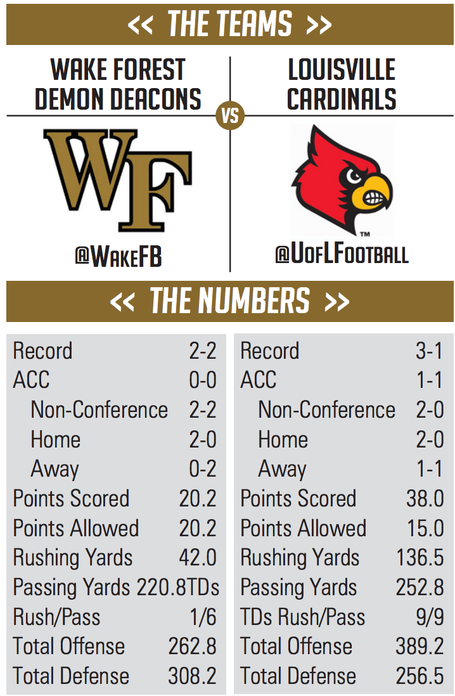 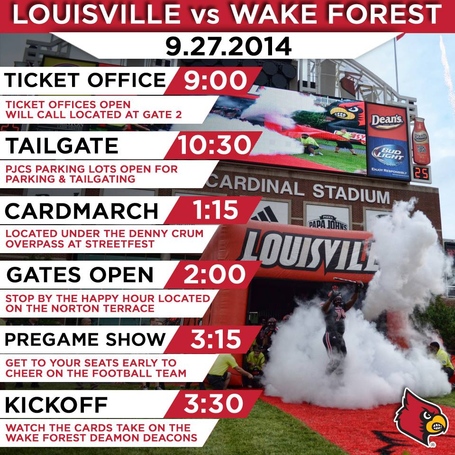 Wake's offense is pretty bad at just about everything and Clawson made it obvious that he was coaching for the future by naming true freshman John Wolford the starter at quarterback before the season started. Wolford put up fairly crazy numbers in high school last year but was not heavily recruited. He has shown flashes of really solid ability so far but the freshmen mistakes are many. He's taken a handful of really bad sacks and has thrown seven interceptions already. But when given time he can find the open receiver when his first option isn't available. That's a real positive for a guy that was planning prom night six months ago. If, and its a big if, Wolford gets solid protection from his line he could expose a defense that has struggled a bit to stop passers on third down.

I pretty much refuse to consider SMU a real team this year with their coach quitting a month into the season. Therefore, Wake is the worst rushing team in the country. Even if you take out their sack yardage, they are the fourth worst team. They didn't return any of their top running backs from last year and the inexperience has shown. Wake's run plays make Shawn Watson's slow developing runs look like hyper speed. A lot of their run plays are inside zone read runs and I honestly can't tell if it is by design that the quarterback takes so much time making the read. They also like to pull linemen on these plays which is why Wolford rarely keeps the ball. Wake is averaging 1.4 yards per carry. That won't cut it against a defense that wants to make you one dimensional.

Wake didn't return much at the skill positions on offense and wide receiver is a glaring example of that. Clawson's offense likes to spread the field and speed things up as fast as possible. To be successful with that type of offense you need depth at receiver and Wake just doesn't have it. They run a base "Ace" set with three receivers and a tight end in Cam Serigne than can split out wide. Those four starting receivers are about all that have played this year. They have all been decently productive but they lack a deep threat or a player that is dangerous in space. It limits what the offense can do and has led to a lot of five to eight yard routes that don't scare the defense much. Wake will need one of their receivers to make a few plays to loosen up the defense Saturday.

As much as we complain about the offensive line issues at Louisville, Wake fans might have a better argument with the issues they've seen so far this year. Wake's opponents obviously haven't held back with blitzing the true freshman quarterback and he hasn't always done well himself with getting rid of the ball. But, the line also hasn't handled the pressure well. The line has given up 15 sacks and 38 tackles for loss in four games. They system isn't a complete change from Grobe's offense but it does rely on a lot of misdirection and crossing routes that take time to develop. The line has to hold blocks for longer and they have struggled with that. With such a porous running game, guys likeLorenzo Mauldin and Sheldon Rankins will be pinning their ears back on long yardage situations.

Louisville will finally get a break from aggressive, blitzing defenses this weekend. Wake is in no way a bad defense but they are much more contend with trying to get pressure with their front four. The defensive line isn't very big but they can all move pretty well. One thing that should be a positive this week is their lack of a true pass rusher. Zachary Allenhas shown a high motor and good speed in pursuit but there isn't a guy like Mike Whitehead or Eli Harold that should be a focus for the line.

Wake's defense doesn't have nearly the issues that the offense does. The group of linebackers have done a great job of flying to the football. The issue has been that when they get there they haven't always been able to get the runner down. It hasn't bit them too much because they have done such a good job pursuing the ball that they get a lot of gang tackles. Team speed is the biggest change for Louisville moving into the ACC and Wake has plenty of speed for a team that has been on hard times lately. Brandon Chubb andMarquel Lee do a great job of flying to the ball. They don't necessarily take on blocks extremely well but do very well making plays in space.

Kevin Johnson is one of the better cornerbacks in the ACC but he hasn't made many plays so far this year. He and the rest of the defensive backfield have really had issues with tackling this year. With Bobby having some success running the ball outside the tackles this season it will be something to keep an eye on if Johnson and Merrill Noelcan't hold the edge and bring down Dominique Brown and company. In coverage the Deacons have been very good statistically. Playing against Army and their power option attack will always help you pass defense look a little better. But without the Army game the pass defense is still only giving up about 200 yards per game. They haven't been tested by receivers with the speed of a James Quick or Matt Milton so it will be interesting to see how they fare against better talent.

Perfect weather, first home game in three weeks, Reggie Bonnafon's debut as a starter, U of L's first Atlantic Division game; plenty of reasons to be excited this morning.

Pregame Meal: I know we have chips and dip and beer, but no idea what else. Not a great week of communication for the tailgate team. Babies are taking over, which is completely unacceptable.

We have a U of L themed tailgate wedding shower immediately after the game, and while the invitations say to just wear whatever you wore to the game, I still feel like I can't look like a total heathen. Almost took it back to the start of the season with the black national championship polo, and I still might change at the last second, but for now, I'm leaning red.

Has not been an area of strength so far this season. Wouldn't be surprised to see some more Joshua Appelby today.

I want it to be Regggie Bonnafon every bit as badly as you do, but this might be the first week since he arrived that Michael Dyer has been an afterthought during the week leading up to a game, and I'm going to say he stills the headlines back with his best performance as a Cardinal this afternoon. Wouldn't hate it if it's Reggie though.

It's been hard to find something borderline offensive before, but this Wake Forest team takes "lack of Twitter drama" to another level.

All of the players' mentions about the game look like this:

First ACC game vs Louisville today at 3:30 on ESPNU. Check us out #GoDeacs

Landed in Kentucky! Play Louisville tomorrow at 3:30 on ESPNU! #GoDeacs

This is probably going to be the nicest team to ever take the field inside Papa John's Cardinal Stadium, and that's a list that includes a bunch of grade school squads. I mean, there is a Demon Deacon player whose actual Twitter bio is simply "Grades and Football." That's it. No "The uncoverable one" or even "waiting on my moment"; just "Grades and Football."

Between this and that locker room video from earlier in the post, Wake Forest might have just become my second favorite team in the ACC.

--This game will be Louisville's first Atlantic Division contest, and is the first league game, period, for Wake Forest this season.

--Louisville has won 20 straight home games under the direction of Bobby Petrino.

--Louisville is 14-8 all-time against teams from the state of North Carolina.

--Louisville is 16-2 in the month of September with Bobby Petrino as the head coach.

--Starting Wake Forest quarterback John Wolford is the nephew of Louisville native and current St. X football coach Will Wolford. Earlier this season, John Wolford became the first true freshman to ever start a season-opener for the Demon Deacons.

--Louisville is 17-0 over the last three seasons when attempting at least 35 rushes in a game.

--This is the first time since the season-opener against Miami that Louisville will not be playing on a "Military Appreciation Day."

--Wake Forest has posted a shutout half in three of four games this season.

--U of L announced Saturday morning that the Louisville/Wake Forest game is another sellout.

--Louisville's Gerod Holliman leads the nation in interceptions with five.

--There are just three true freshman quarterbacks who have started games at the FBS level this season. Louisville has already faced two (Miami's Brad Kaaya and FIU's Alex McGough), and will face the other one this afternoon. The Cardinals will also be starting their own true freshman at QB, as Reggie Bonnafon will be making his first collegiate start.

--Louisville is 77-26 all-time at Papa John's Cardinal Stadium. That 74.8% winning percentage is the best mark nationally for teams playing in their current stadium.

--Wake Forest started the season with 74 of its 105 players as either freshmen or sophomores. That's tied for the third-youngest roster in the FBS.

--Louisville is currently riding a consecutive game scoring streak that spans 177 games dating back to the 2000 season. The streak ranks as the third longest in the ACC behind Virginia Tech (248) and Georgia Tech (215).

--Louisville's defense ranks seventh in the FBS against the run, allowing just 78.3 yards per game.

--Bobby Petrino is 40-6 at Louisville against unranked foes.

--"We are playing a really quality, physical, extremely well-coached football team. They've got a lot of big-time football players. Their defense is one of the best in the country. They've got a bunch of guys up front who will be playing on Sundays. And offensively, certainly Coach (Bobby) Petrino's track record speaks for itself. They're averaging 38 points a game." --Wake Forest coach Dave Clawson

--"The biggest thing to me is that it's about us, how we perform and make sure we execute," said U of L defensive coordinator Todd Grantham. "It's a home game, it's a conference game, so understand the importance of the game and we have to be ready to play." --Todd Grantham

--"Since the day he got here, (Reggie Bonnafon)'s been very mature, a quick learner, very competitive. Every time we've put him into the game, he's executed well. He has a little bit of different flavor, with the fact that he's very athletic and he can run. It'll be interesting to see how it all goes." --Bobby Petrino

--"We're excited to play Louisville, especially with the two successful years they're coming off with Teddy Bridgewater. But we know they can be beat. UVa. beat them (Sept. 13), and we watched that game in the hotel waiting for our game. We know it's possible, and we're really excited about it." --Wake Forest DL Brandon Chubb

--"Really, it's just been about communicating with my DBs, learning where each corner and safety is, watching film and learning what the offense likes to do. We're playing aggressive because we have guys backing each other up." --Geod Holliman

--"I think we still need some improvement, but I'm not surprised by how well we're playing. We've got a lot of talent in the secondary and I expected us to play this well. I expect teams to throw away from (Holliman) unless they want picks, but that opens up the door for a lot of other guys." --Terrell Floyd

I've been more guarded than most folks every week until now, but I think this is the game where that elusive "giant step forward" finally comes.