--Both exhibition games (Nov. 1 and Nov. 9) will be played at 12:30 and will be televised by WAVE-3. It would seem as though the era of the weeknight exhibition game may be over.

--Also over is the era of the local broadcast. All of the games on WAVE-3 and WHAS-11 will be through the ACC Network, which means they will have a regional broadcast team from Raycom. The dreams of hearing Drew Deener say penis on the air in 2014-15 have officially died.

--The season-opener against Minnesota will be played at 7 p.m. ET, which is 8 p.m. local time in Puerto Rico.

--As we noted yesterday, the Western Kentucky game will be carried by Fox Sports 1. That game is set for a noon tip time locally, 11 a.m. in Bowling Green.

--Three of the four Global Sports Showcase games are getting the ESPN3 treatment, which is a direct slap in the face to the GSS. Also, I'm still taking GSS championship t-shirt ideas. I have received zero, so you've got a pretty good chance at making an impression if you submit anything.

--I got engaged on the day of the Billy Minardi Classic last year (Dec. 14), and it's nice to see U of L honoring the significance of that moment by playing this year's game on the same day. 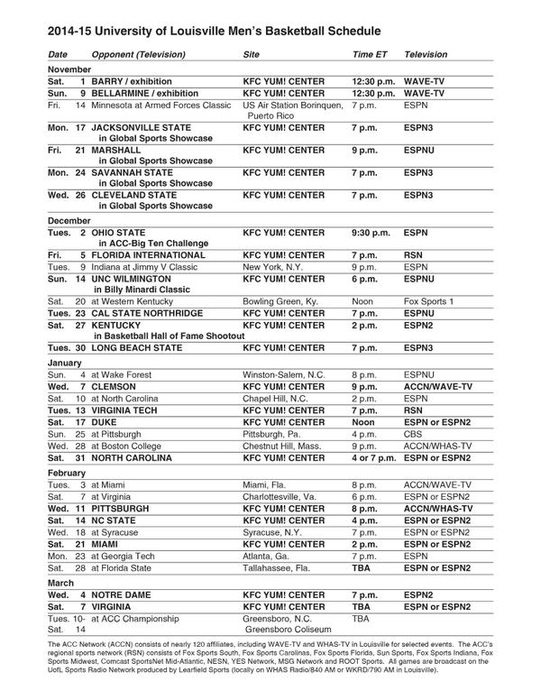