Marie "Chalky" Goodwin was a Louisville basketball player in the 1930s who recently celebrated her 100th birthday. This was her favorite present from the celebration, and she was beyond thrilled to watch the soccer Cards take down Kentucky last night.

For the first time this season, a line actually appears to be moving in the Cards' direction.

This picture is everything:

The Vikings placed Matt Cassel on IR today, which means it's officially Teddy's show in Minnesota for the rest of the season. The good news is that everyone in Louisville is going to have the opportunity to watch his debut as a starter with their own eyes on Sunday.

Here's the coverage map for the 4 p.m. time slot: 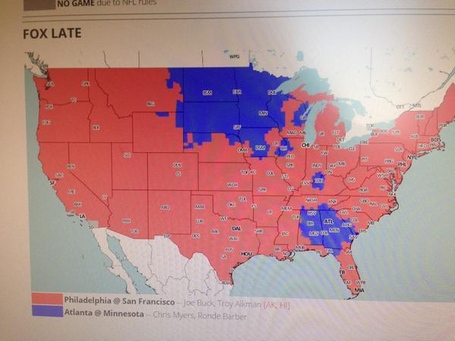 Club G has been Louisville's home for Vikings fans for a couple of decades now, and naturally they're pretty pumped about these latest developments.

"How often does your star college quarterback go to your favorite NFL team?" said John Chawk, who helped start the Norsemen in 1994. "Hardly ever? Never, maybe?"

Bridgewater, the University of Louisville graduate, will make his first NFL start on Sunday and presumably hold the job the rest of the season. The Vikings on Wednesday sent veteran Matt Cassel to the injured reserve for multiple broken bones in his foot.

While Sunday's 4 p.m. kickoff will air locally on Fox, most games aren't available without an extra NFL TV package. Want to watch? Join the Norsemen.

"There aren't any dues," Chawk said. "Just show up, wear some purple and have some fun. We've really had an influx of new people at Gerstle's."

The general consensus from the Daily Norseman is that while they're excited about the start of the Teddy era, they're also pretty worried that with Minnesota's complete lack of parts around him, he's going to be running for his life.

One final Teddy note: Bovada has released the following over/under odds on Bridgewater's debut as a starter:

Terrific news from the recruiting world, as four-star athlete Traveon Samuel plans to enroll early at U of L.

Samuel committed to Louisville in August, but that hasn't stopped others from staying involved with him. Interestingly, he says California is the school pushing hardest for him to flip his commitment. At the moment, however, he isn't focused too much on what other schools are saying.

"A lot of schools have still been coming at me hard, but I've been setting my eyes on the prize and that's a state championship," Samuel says.

It'll likely be hard for any school to pry Samuel away from Louisville. He's got a great relationship with Louisville defensive line coach L.D. Scott -- They talk on an everyday basis, Samuel says -- and plans to enroll early at the Atlantic Coast Conference school. He will sign a financial aid agreement with the Cardinals on Dec. 10 and enroll for the school's spring semester after he graduates from Central-Phenix City.

Louisville head coach Bobby Petrino, who is known as an offensive mastermind, has promised to utilize Samuel in a multitude of ways. Samuel expects to get time at slot receiver, running back and even as a Wildcat quarterback.

"Just coming in as a freshman all their key receivers next year will be gone so I've got a good chance to start," he said.

Louisville is in a four-way tie for fifth place in the latest ACC power rankings from SB Nation.

It was already linked in the Cards in the NFL post, but William Gay wrote an extremely powerful piece for Sports Illustrated that's online today.

When I went to college at Louisville, I didn't really talk about my situation. I didn't want anyone feeling sorry for me, or to think I was making excuses, like, Oh, that's the guy who grew up without any parents. In my first few years in the NFL, I was the same way. I just wanted to be known as a hard worker and I wanted to be strong, like my mom.

A few years ago, however, somebody told me about an organization that helps women who have been affected by domestic violence. I had seen first-hand how it can shake a family, but honestly, I was surprised to learn that there are organizations solely devoted to helping battered women and their families. I know my mom didn't know. If she knew there was a way she could get help, she might still be alive.

Ever since I realized this, I've made domestic violence my cause. In the offseason I speak about it to help raise awareness. I also routinely visit a women's shelter in Pittsburgh. I usually try to go twice during the season, around the holidays, too. Families can only stay there about 30 days, but they're there because they're in dire need of help.

I love going there and hearing people's stories. We tend to call them victims, but I call them heroes. They've gotten themselves out of a bad situation. I help out with whatever they need, and I also play with the kids. They know I play for the Steelers, but once they hear my story, they open up to me. I'm not just some football player dropping in, and the trust they have in me is the most rewarding part. Learning about the shelter has been a blessing, because going there is how I've grown into a man in this league.

Here's more on Gay's story from this video which is a few years old.

Top Drawer Soccer says that former Card and current New England Rev Andrew Farrell is the best soccer player to ever come out of the state of Kentucky.

After the first four weeks of the season, it would seem as though the ACC is struggling to live up to last season's success.

Kevin Ware had a bit of a scary moment during Georgia State's exhibition tour in Costa Rica.

"He hit the wall, went down, stayed down for a little bit, and the entire team froze," Hunter told ESPN's Jeff Goodman. "I was scared to death when he didn't move at first - but then he got up and sprinted back."

Of course everyone remembers two Aprils ago - as much as we've since tried to forget - when Ware landed awkwardly after a jumper and splintered his tibia.

But luckily, thankfully, mercifully for Ware, the incident this summer was a near-miss.

He played in three games while the Panthers were in Costa Rica and his performance seems to have put him in the discussion to land a starting role.

The Syracuse Post-Standard likes Louisville by 21 on Saturday.

Your recap of the U of L field hockey team's 6-3 triumph over Ohio State yesterday. If you haven't been paying attention, the ladies are 7-1 and a legitimate national championship contender. Not bad for a squad that was picked to finish last in the ACC heading into the season.

Cards win 6-3 over the Buckeyes!! Anyone notice our lucky charm in the middle? #MrsB #allin #GoCards pic.twitter.com/fYJbEo39fG

Wake Forest has struggled to move the ball on offense this season, which has head coach Dave Clawson understandably worried about facing a Louisville defense that ranks among the best in the country statistically.

There have been about four "hey look, there are actually some really good guys in the NFL" stories about former Cards over the last couple of weeks, which is very cool. The latest is from the Syracuse Post-Standard on Eric Wood.

For a few hours in that ballroom, nobody questioned the morality of the NFL. Ray Rice wasn't a topic of conversation, nor was Adrian Peterson or Roger Goodell. It was about a group of players connecting with members of the community, coming together to raise thousands of dollars for Carly's Club for Kids and Cancer Research in Western New York.

When the Buffalo Bills alumni association presented Wood with a check for $2,500 to the cause, it carried a simple message: You won't be remembered for what you did on the field but rather what you did in the community.

If that's the case, the players at Wood's event on Monday took a step toward building a relationship with those in the community. It was Wood personally thanking nearly every person that walked through the door. It was C.J. Spiller taking pictures with anyone who asked and Sammy Watkins signing his way through the crowd that surrounded him the minute he walked into the room.

The rookies got their first taste, too. Offensive tackle Cyrus Kouandjio stood behind the bar all night serving drinks, with all tips going to the Eric Wood Foundation and Carly's Club. These players aren't the only ones in the NFL doing good, and what they did on Monday can't undo the damage other NFL players have done to the league's reputation, but for one night it was a reminder that NFL players aren't all bad.

"You talk about guys who sacrifice most of their Tuesdays for charity work or nightly hospital visits that never make it to the paper," Wood said. "That's not why the guys do it, to get good publicity. But at the same point, if all the guys are going to talk about is the four bad guys in the NFL and everyone's going to get labeled, why don't we all pumped up our teammates when they do something good?"

The U of L women's golf team remains in a tie for fourth place heading into the final round of the Golfweek Conference Challenge in Colorado.

A photo gallery of the Louisville soccer team's win at Kentucky last night, as well as the full highlight video:

That first goal was a thing of beauty. Ricardo Velazco's Shmoney Dance, however, was not.

It appears as though Syracuse will be without its best wide receiver, Ashton Broyld, when the Cards come to the Carrier Dome in two Fridays.

The U of L women's soccer team faces a tough task at No. 5 Florida State tomorrow night.

Athlon ranks Rick Pitino as the second-best hoops coach in the ACC, which is at least one spot too low.

And finally, expect to hear a heavy dose of Card Chronicle on your radio dial tomorrow. I'll be in studio with John Ramsey from 9:30 a.m. until noon on ESPN 680, and then our man Keith Wynne will be on with Jason Anderson around 3:30 p.m. on the same station. As always, you can listen online at ESPNLouisville.com.