Velazco and Kubel both netted second half goals to lift Louisville to a 2-1 win over the Wildcats in Lexington. Kubel's "L" was also in top form. True brilliance from the freshman German international.

Kendrick Lamar released a new single, FIFA 15 hit shelves nationwide and Louisville men's soccer beat Kentucky on the road. Sorry, How I Met Your Mother, but it was a busy news day, and while we're all thrilled that your final season is now on Netflix, it kind of got lost in the shuffle. It's not you, it's that Louisville beat Kentucky. Kendrick's new single is also pretty fun (though a bit poppy), ditto for FIFA 15 (minus the poppy part, it's just a video game).

Yes, the Abe Out happened in Lexington last night, but Lincoln's (ALLEGEDLY) beloved Kentucky Wildcats couldn't come through for him as #9 Louisville came to town and stole their thunder in front of a record crowd of 3,368 at the newly-renovated Bell Soccer Complex. Before we go any further, it's important to tip our collective top hat to Kentucky for a great promotion and a great crowd. While we demand further investigation and verification of Abe Lincoln's fanhood, a crowd of 3,000+ always deserves a round of applause.

Of course, kudos also go to the two full buses of Louisville fans that made the trek to Lexington to cheer on the Cardinals away from home. No matter how outnumbered Louisville fans may have been, their presence did not go unnoticed. Head coach Ken Lolla saluted the supporters in his post-game interview.

Lolla spoke about it in his post-game comments, but the first half of a rivalry game can often turn out the way last night's did, with a lot of emotion leading to a lack of sharp play and, consequentially, a lack of goals. It's a pretty common phenomenon, and leads to the result coming down to which team can settle in and find a rhythm in the second half. Usually, Louisville is fairly consistent in their ability to adjust to the moment.

Last night wasn't any different. Ricardo Velazco's second goal of the of the season came in the 64th minute from a nice bit of play from (not surprisingly) Will Vitalis and Ben Strong. Vitalis slipped a ball into the box for Strong, who was able to forward the ball on to Velazco for the finish that broke Kentucky's impressive 478-minute streak without allowing a goal.

Bryan Celis answered quickly for the Wildcats, striking in the 72nd minute to equalize and put the pressure back on the favored Cardinals. Despite an increased intensity in the second half that saw eight yellow cards booked (five to Louisville, three to Kentucky), the Cards were able to remain more organized and control possession. That eventually turned into the game-winner, as Tim Kubel's first goal in a Louisville uniform came in the 79th minute off of Velazco's cross to break the tie and claim a lead that wouldn't be relinquished.

Louisville improved to a 4-1-1 mark on the season with their second straight road victory. Every match benefits a team somehow, win or lose, but finding a way to be composed in a rivalry win in a difficult road atmosphere is a big feather in the Cardinals' cap. Ken Lolla has emphasized on multiple occasions that championships aren't won in the comfort of your home stadium, and victories on the road are important preparation for the ultimate goal of winning conference and national championships. Louisville accomplished that on Tuesday, and will have a couple of similar tests before season's end.

A final and completely irrelevant note from the win at Kentucky: There's no way of knowing whether or not this was planned, but team-colored pants with a neutral white button down ought to be a requirement for the entire NCAA for the rest of the season. Lolla wins, obviously. (Photo - Chet White, UK Athletics) 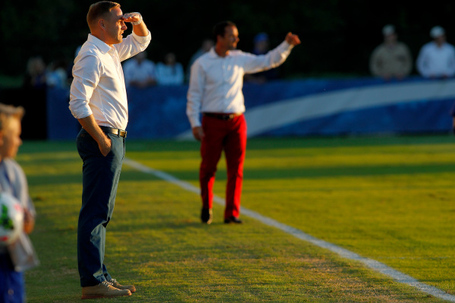 After a brief trip to Conference USA (yes, Kentucky plays in C-USA, the SEC doesn't sponsor men's soccer), Louisville will return to ACC play at the top of the Atlantic Division table. They'll lead off a busy weekend in Louisville athletics on Friday night when they welcome Big East buddy Pittsburgh for a 7:30 p.m. kickoff in the friendly confines of Lynn Stadium. The Panthers are 0-1-1 in conference and 2-2-3 overall.

The average attendance through three home matches at Lynn is over 5,000, and keeping pace with that figure would be pretty incredible. You can get tickets online or at the Papa John's Cardinal Stadium box office. It's sad to say farewell to Abe Out week, but since Louisville emerged victorious, we can all look back on this ordeal fondly and know that President Lincoln probably would have picked the Cardinals since he was never one to lose to his rivals. See you Friday at Lynn.

"Most folks are about as happy as they make up their minds to be." - Abraham Lincoln