Presley Mercke is basking in the glow of a post-win Monday.

OSM and the CCBMM is all over Subway's new local commercial.

The Miami Herald's David Neal was not overly impressed with Will Gardner.

I don't know how many potential customers FIU or Ikea lost to that only-in-Miami piece of contruction planning. I do know FIU's defense and returners make the Panthers an annoyance to good opponents.

In his last six games, going back to the last two games of last year, Michael Wakefield has 5.5 sacks and 8.5 tackles for loss. The defense came up with two more fumble recoveries, including the career first for freshman linebacker Anthony Wint. The secondary came up small Saturday against a quarterback no better than some FIU sees in Conference USA or each day in practice (I'd put Will Gardner behind both Alex McGough and E.J. Hilliard). Redshirt junior cornerback Richard Leonard blamed himself for not preventing James Quick's marvelous catch-Gregory Hines-and-run 74-yard touchdown, but at least Leonard was there to make a play. On Quick's 37-yard touchdown and the third-down 28-yard completion to Gerald Christian that got Louisville off their own 4-yard-line, each had more space than the GC on a Friday.

The full post is actually pretty funny and worth your time if you want to hear Neal thoroughly and eloquently rag on FIU football.

U of L has all the details of the field hockey team's monumental 3-2 upset of No. 1 North Carolina on Saturday.

If you're interested in making the trip to Lexington tomorrow to support the men's soccer team against Kentucky, here's the online signup sheet. 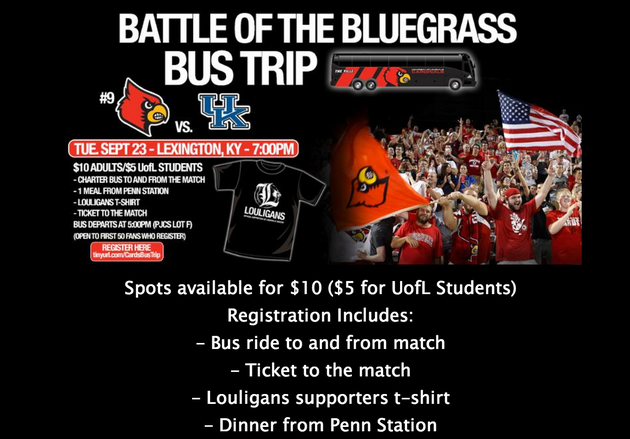 Former U of L teammates Adam Hadwin and Derek Fathauer are both headed to the PGA Tour after finishing No. 1 and No. 2 on the final Web.com Tour priority rankings.

Finishing 1-2 on the priority list guarantees fully-exempt status and an exemption into next year's Players Championship, right back here at the Stadium Course at TPC Sawgrass.

"It's unbelievable and to have Adam Hadwin finish up top two it's almost a dream come true," said Fathauer. "We're both going to the PGA Tour and making our school proud."

"I think Adam and I playing well really motivates (the current Louisville team) too, because we've been so close with the team," said Fathauer. "Our coach up there at Louisville is unbelievable. He's tough on us but he's kind of got us all set up, like set on a path."

After their finish here, no one could blame them if they continue to follow that path together.

Congrats to both guys. It'll be fun having a pair of names to follow closely on the Tour.

Sports Illustrated ranks the 16 best college hoops teams not to win the national championship. It's a pretty solid effort, but I have no idea why they think the 2011 Ohio State squad is worthy of such an honor.

The Courier-Journal has issued a personal letter of apology to John Calipari for the whole "Calibaby" thing last week.

Rick Pitino and Mike Balado are still hard at work on the recruiting trail .

Vikings.com has the full set of highlights from Teddy's NFL debut.

There is nothing overrated about staying in college. Each year was a different adventure, journey and challenge. #UofL

ESPN says Arizona and Louisville will be the two top defensive teams (Insider) in the country for 2014-15.

The folks at Fox Sports are pretty big fans of the uniforms the Cards will be wearing against Florida State.

@Dkay81 - here is a photo of the back of the James Burgess family t-shirt pic.twitter.com/WuL3T75SJA

Prileu Davis is still around and doing basketball things with John Lucas.

SB Nation's Blogger so Dear (Wake Forest) couldn't be happier with the Demon Deacons' win over Army last weekend, but knows the squad is facing an uphill battle in Louisville on Saturday.

Wake will take on Louisville for the first time in football since the 2006 Orange Bowl and for the first time ever in an ACC matchup. The Cardinals lost to UVA last weekend to fall to 1-1 in the ACC but bounced back with a dominant 34-3 win this week over Florida International. I expect Louisville will be around a 23 or 24 point favorite at home and while I think Wake gets the backdoor cover I really wouldn't be surprised to see Louisville run away with it. Wake hasn't looked particularly sharp through four games this year and even with a loss to UVA (who has looked pretty damn good so far this year), Louisville will be able to get the job done at home and get it done comfortably. My pick is 34-13 Louisville but I hope the Deacs prove me wrong!

Leave your comments, questions, or concerns below and let me know how you think Wake will fare next weekend in the conference opener. As always, go Deacs, 2-2 entering the conference season gives us an opportunity to build on the start to the season and not fall too far behind the eight ball. Let's get out and get a shocking road win in Louisville.

You would think this would be a good sign for the rest of the week:

The ACC needs to get back on track after a dismal week four.

Scout's ACC power rankings have Louisville at No. 7.

7-Louisville- The Cardinals rebounded from a loss at Virginia with a solid 34-3 win at FIU. Bobby Petrino's team now plays host to Wake Forest and then goes to Syracuse before a big Oct. 11 game at Clemson, which should determine if Louisville can get in the hunt for the Atlantic.

The U of L volleyball team rolled to a championship at the Rice Invitational over the weekend.

And finally, Mark Ennis and I are back on the air tonight from 6-7:45 on ESPN 680 and ESPNLouisville.com. No one is allowed to eat dinner until they've finished listening to the show. After that, we'll all talk about what we're eating together.