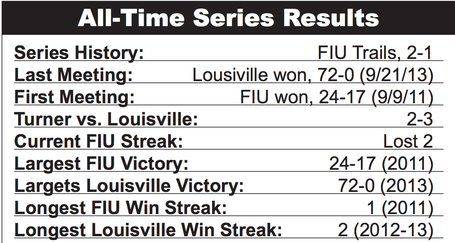 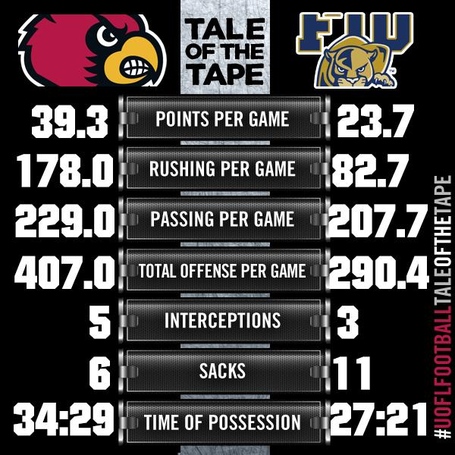 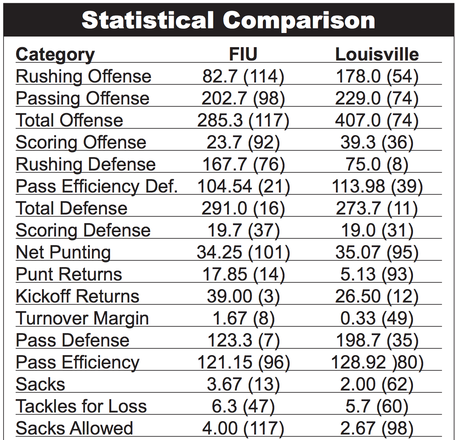 Ron Turner still hasn't decided on a full time starter at quarterback but I fully expect true freshman Alex McGough to finally be that guy after his performance last week. Turner never seemed to really trust E.J. Hilliard to run his offense and just like last season, he was given a very short leash. McGough has played well at times and has shown the ability to get the ball down the field as well as make a few plays with his legs. The biggest concern for true freshmen quarterbacks is always how comfortable they are when they are pressured. McGough seems to handle that well even though he has taken a few too many sacks. He hasn't thrown an interception yet and has completed a handful of nice passes down the field. How he handles Louisville's interior blitzes will be a big factor in the game.

Turner dismissed a lot of players last season and made it known pretty quickly that he preferred guys he recruited over some of the players he inherited. That is showing to be the case in a good way with running back Alex Gardner. Gardner has become the feature back as a true freshman and he has played very well since taking over. He is a smaller back with a very good initial burst. I can't speak to his top end speed, but if he can get FIU in some third and manageable downs it would go a long way.

FIU's receivers have looked improved this year also. They like to line up with two tight ends with two wide receivers. Tight end Jonnu Smith is their leading receiver with 18 catches on the season. There have been multiple guys that have been able to make a big play or two and it has really helped the offense. The issue last season is that there was no real attempt to make plays because they were so overmatched. That won't be the case this season with more depth and a few younger players who could step in and play. Something to look out for will be 6-4 receiver Dominique Rhymes if he matches up against Andrew Johnson.

Giving up 72 points would be pretty hard to top and I don't think Louisville will have it as easy as it did last year. FIU has almost a completely new defense and they have transformed so far this year. Defensive ends Mike Wakefield and Denzell Perine have combined for 9 TFLs and 6.5 sacks this year with the rest of the defense adding some impressive numbers also. With the line doing such a great job getting pressure, the defense has been able to put their corners in press coverage and it has worked well to disrupt timing on third downs. With Louisville's offensive line issues Wakefield and Perine could both have a big day.

FIU's back seven have looked pretty good this year. The coverage has been good withRichard Leonard and Jeremiah McKinnon doing a very good job of locking down receivers. Tyler Boyd is arguably the best receiver in the ACC and he was held to 50 yards last week. The defense hasn't done well at all against the run but if they can get Louisville in obvious passing situations they have to feel good about their chances to put pressure on Will Gardner as well as not feeling too threatened by Louisville's deep threats.

I hate that it's this low, but like I said before the Murray State game, one of the few negatives of having a loaded schedule is that it magnifies the small number of games on the slate that are...shall we say, less than elite.

I think the Virginia game actually made this afternoon more exciting than it would have been otherwise. Instead of a 3-0 team heading down to FIU with far more to lose than gain, we now get to see what changes have been made in the last six days, and hopefully bring home some significant signs of improvement. Not that I wouldn't rather have things the first way...I'm just sayin'...let's all try and think positively.

Regardless of all that, this is the last game of the year where Cardinal fans might have to force themselves to get excited (Wake is at home and a conference game, so I don't think it qualifies). I can't imagine the Excitement Level Meter dips this low again in 2014.

Changing the hat up. Had to happen. Also going with a new shirt that my sister-in-law got me for my birthday. It's super soft and has a pretty awesome retro Cardinal bird on the back. Khaki shorts were a mistake last week. I knew that going in, and I did it anyway. Only way I'll make that mistake again this season is if its too hot in Clemson on Oct. 11. We'll cross that bridge when it's built.

I actually typed out Drake's buffalo chicken quesadilla, but I had to delete it because I don't want to fail to come through on that promise two weeks in a row. We had a last second venue watch change for Virginia, which left me scrambling and spending wayyy too much time in the Westport Rd. White Castle drive-thru line. The buns on my chicken rings and cheeses wound up all being stale.

Basically, nothing went right last week. You could have seen that loss coming from 2008.

Dude has been a rock this year. Time for him to start getting some deserved pub.

Bold Prediction: Michael Dyer plays, but he only rushes the ball three times, all in the second half.

It has not been the Year of the Bold Prediction Part Deux, and I'm hopeful that my streak of being wrong continues here, because I'd like to see some serious work from a Cardinal wearing No. 5 again.

The vast majority of the Panther squad seems about a thousand times more interested in their former high school teams than anything related to FIU, but there are a small number of exceptions.

--This is the final game of a four-year, home and home series between Louisville and Florida International.

--After going 4-20-1 in their first 25 games played in the state of Florida, Louisville has now won five straight games in the Sunshine State.

--Louisville is 20-29-1 all-time against teams from the state of Florida.

--Bobby Petrino has only lost back-to-back games once during his career with the Cardinals, and it happened in his debut season as a head coach (2003). His squad fell 31-28 to 14th-ranked TCU, and then 10 days later they fell at home for the first and only time under Petrino's watch with a 37-7 loss to Memphis.

--FIU has played each of its first three games of the season at home.

--Even with last week's loss, Louisville is 16-3 in its last 19 games. Those three losses have come by a combined eight points.

--FIU backup quarterback E.J. Hilliard was Teddy Bridgewater's backup at Miami Northwestern High School. They each refer to one another as the co-creators of the G.U.M.P. ("Great Under Major Pressure") nickname.

--Through the first three games of the 2014 season, FIU's defense ranks No. 16 in the country in total defense, allowing just 291.0 yards per game. Opponents have had troubles throwing the ball against the Panthers as FIU ranks No. 7 (123.3 yards/game) in passing defense and No. 21 (104.54) in pass efficiency defense. FIU has been good at getting after the football as well, as the Panthers rank No. 8 in the country in turnovers, with nine.

--Louisville is currently riding a consecutive game scoring streak that spans 175 games dating back to the 2000 season. The streak ranks as the third longest in the ACC behind Virginia Tech (247) and Georgia Tech (214).

--Saturday's game will be Military Appreciation Day at FIU, and the Panthers will be wearing special patriotic helmets.

--Under Bobby Petrino, Louisville is 15-2 in the month of September.

--Gerod Holliman is tied for the nation's lead in interceptions with three.

--FIU currently ranks No. 13 in the FBS and first in Conference USA with 3.67 sacks-per-game, while ranking No. 4 in the conference in total team tackles for loss, averaging 6.3-per contest.

--Under Bobby Petrino, Louisville is 17-3 against non-conference foes.

--Louisville is a perfect 16-for-16 inside the redzone this season, with 15 touchdowns and one field goal.

--"What we have to do is make sure we stay focused. We need to understand much like the Miami game that this is a new season, new team." --Bobby Petrino

--"We're not even thinking about last year. We're a different team. The focus is first and foremost on us, as it always is. We don't worry about what they have on their helmet or the name on their back. We focus on ourselves to get better but at the same time prepare for them." --FIU coach Ron Turner

--"When you look at them, I think they're well-coached. They know where to throw the ball relative to where you look. They can put it in some good spots. They've got a couple wideouts that can make some plays and they try to find ways to get those guys the ball." --Todd Grantham

--"I've watched some of FIU [on] film. They're a lot better team this year. We've got to come out and play hard. You can't face it as we've got [to play] a smaller school. You've got to treat everyone the same, go out and play football." --Will Gardner

--"They were up 16-0 on Pitt. They were playing hard. We've got to understand that and be ready to play." --Todd Grantham

--"We're coming off a loss. That's motivation enough. We've got to go out and prove to everyone that we're the team we say we are." --Sheldon Rankins

--"They've got speed - fast receivers. Obviously, they don't have Bridgewater. Biggest thing is their speed and athleticism across the board, whether you're talking offense, defense, special teams. Extremely athletic ... and about half of them from South Florida." --FIU coach Ron Turner

--"We've played these guys before. They have different plays. They have a different style, probably. The motivation (for Louisville) is off the game that we just lost. We can't really go into this game and say, 'These guys, we played them before and beat them.' So what?" --Lorenzo Mauldin

--"It's a completely new year, two new teams, new schemes, new staff. We've got to go down and prove that we're a good football team and that's what we're going to work hard to do." --Bobby Petrino

--"We're not going to panic. We're going to continue to do the things that we know will work. We just have to do them better." --Bobby Petrino

I want to believe that we're going to go out, put up 56+ points and steamroll these dudes, but I just haven't seen anything yet that leads me to believe that's going to happen. Still, I'll be surprised if today doesn't result in a step in the right direction and mostly positive vibes all around.