Baby Jeremiah is sick and tired of living in a world where U of L's most recent football game was a loss, so he's decided to spend the rest of the week tailgating for Saturday.

Jeff Walz's monster year on the recruiting trail has continued this week with the commitment of Samantha Fuehring, the No. 48 player in the class of 2015 according to All-Girl Sports Report. Walz's class, which now includes five top 50 players, is ranked No. 2 in the country, behind only Connecticut.

Please note and/or respect the fact that I did not drop a "when in Rome" here. We don't do that with evening notes. Morning and afternoon, maybe. But evening? Hell no.

Louisville has not been an underdog in a football or men's basketball game since March 2, 2013 -- the hoops game at Syracuse where Luke Hancock put the Cards ahead for good with a corner three in the final minute. That was 564 days ago.

I get that playing in the AAC last year has a lot to do with that fact, but it's still pretty incredible. Unless something wacky happens between now and then, it probably dies on Oct. 11 when the Cards head to Clemson.

So this is pretty much the greatest commercial ever made:

SB Nation College Basketball finally has a Facebook page. Do me a solid and go like it.

If you haven't already seen/read about the worst fake punt in the history of football, you need to change that.

Congratulations to U of L midfielder Ben Jones, who has been named the ACC Men's Soccer Co-Player of the Week.

Louisville's Strong scored two goals as the fifth-ranked Cardianls blanked visiting Duke by a 5-0 score on Saturday night. The goals were the first in a Louisville uniform for Strong, in his first season with the Cardinals after transferring from Virginia Tech. With Louisville already leading Duke by a 1-0 score, Strong pushed the advantage to 2-0 in the sixth minute when he controlled a deflected cross from the right side and scored from 12 yards out. The Mendham, New Jersey, junior later added another score as the Cardinals finished the night with their highgest goal-scoring performance since a 5-0 win over Winthrop in the second round of the 2012 NCAA Championship.

I have significant thoughts about this ranking of the 72 Kanye West album tracks.

Can think of a few thousand, but outside of those, I got nothin'.

The Cards make a brief appearance in this week's Numerical.

Louisville quarterbacks Will Gardner and Reggie Bonnafon combined to average just 4.0 yards per pass attempt in an upset loss at Virginia. They completed just 20 of 43 passes (47 percent) for 203 yards, two touchdowns, two interceptions, and three sacks for 18 yards against a Cavalier defense that is quickly proving itself between solid and very good.

The Hoos ranked 39th in Def. F/+ last year, but the offense ranked a horrific 108th. We don't yet know if the offense is really any better this time around, but the D is doing its job, and after a near-upset of UCLA two weeks earlier, Mike London and Virginia are now 2-1.

And speaking of tough passing days and fast defenses ... Tennessee's Justin Worley averaged just 3.4 yards per pass attempt against Oklahoma. His day was almost identical to that of Gardner and Bonnafon: 21-for-44 for 201 yards, one score, and two picks. Only, he was sacked twice more. Quentin Hayes had two of Oklahoma's five sacks, while Eric Striker tossed in three hurries and Julian Wilson defensed three passes (one pick, two break-ups). Oklahoma's defense is mean and fast as hell.

The U of L lacrosse team's fall schedule is out.

This might have to be my new go-to picture every time something bad happens.

According to SNYtv, Rick Pitino will meet with four-star class of 2016 guard Rawle Alkins on Sept. 25. Alkins, who suits up for Christ the King in Brooklyn, is currently rated as the No. 29 player in the class by Rivals.

Former shoe boss Sonny Vaccaro talks to the C-J about Antonio Blakeney's decommitment from Louisville and Nike's stranglehold on the game of basketball.

On impact shoe companies can have on recruits:

"Kids are more apt to listen to the reasoning given to them just [because of] the product. It gives you pause to at least listen to the people who have been in your corner for these young moments.

There's no question in the psyche of a kid today, it has great meaning, great meaning....it's so obvious that there are kids who are continuously looking at the Nike situation and it's a well-run machine now. It's a machine.

On Antonio Blakeney's decommitment happening this quickly, just 11 days after his commitment:

"That strangest part is, it's Louisville, it's Rick. In the old days, this would not have happened. In the old days, with John Thompson, with Pitino, with Coach K, this wouldn't have happened. They wouldn't have lost a kid this late in the game on a commitment, a commitment to the highest level. How much better can you get than going to Louisville?... It's just a very hard rational reason to see Louisville or Rick losing a player of this caliber in one week. It's strange. It has to be something where the kid sees a big thing at the end of the rainbow.

JaQuan Lyle (remember that dude?) might be out at Oregon before ever suiting up for a game.

Just in case you ever wondered what "Gorgui" meant in Wolof.

Since turning professional, Gorgui, which means "the old one" in Senegal's Wolof language, has shown as he gains more experience, he is more than capable of holding his own against the best basketball players in the world.

At the recent FIBA Basketball World Cup in Spain, the 24-year-old Dieng was Senegal's best player. In six games at the world championship tournament, Gorgui averaged 16 points and almost 11 rebounds per game.

The Senegalese reached the knockout Round of 16 before losing to the host Spaniards, 89-56, in Madrid.

Charles Standberry gets a little bit of ink from his hometown paper. Harvard of the West.

The CCBM turning heads and saying some farewells inside Camden Yards:

More on new U of L baseball commit Trey Leonard. 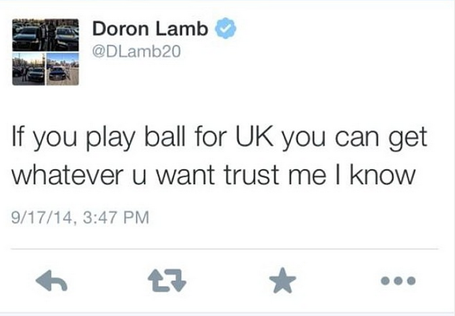 Card Chronicle gets some love(?) in the latest installment of This Week In Schadenfreude.

Despite the fact that the spread has dipped below four touchdowns, one gambling site thinks that the smart money is on FIU to cover against the Cards on Saturday.

The Perez family kicks off this week's Florida takeover: 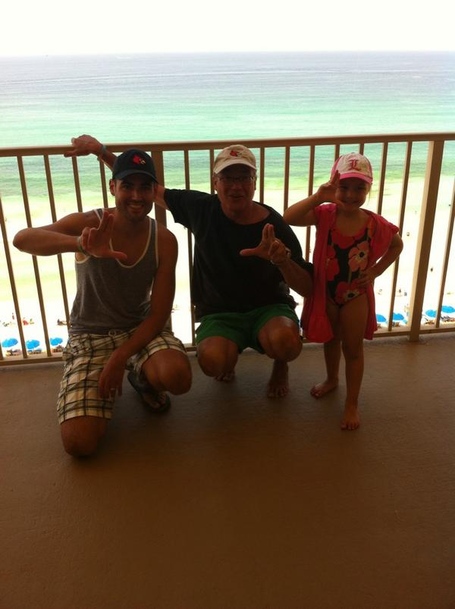 A great longform read about how one football game can mean everything.

A Louisville teen is in desperate search of a bone marrow match, and you might be able to help out.

And finally, the Meat & Potatoes forum for male students at U of L is back for the 2014-15 school year, and begins tonight at 7:30 at The Avenue inside Cardinal Towne. I'll be serving as a guest panelist, and there's also going to be food and stuff...but mostly food. Should be a good time.