Wayne and Trez Answer Some Questions About The Basketball Team

Share All sharing options for: Wayne and Trez Answer Some Questions About The Basketball Team

I may have missed the discussion about this but Wayne and Trez sat down with (or stood up for, the article is not quite clear) an interview with Kent Taylor for the Voice-Tribune.  Some excerpts and my comments below, but the full interview is a must-click.

TAYLOR: What has been your focus this off-season?

BLACKSHEAR: Time is running out for me right now, so I just had to put together a great summer. I just stayed in the gym the whole time. I just stayed away from family and friends and focused on basketball. I focused on my game, just trying to get better.

TAYLOR: What specifically did you feel like you needed to work on?

BLACKSHEAR: Ball handling, but really just getting back to how I used to play – Wayne Blackshear’s style of basketball. I was just working out hard and trying to get my game back.

This is one of the top factors for the whole season, besides generally everyone staying healthy: what are we getting from Wayne Blackshear?  Could he have a Larry O'Bannon-level jump and impact?  If not, who is the best parallel from Louisville history?  Maybe Edgar Sosa?  Always a contributor but never made the full impact that fans wanted?  I've always been mixed about Wayne's ceiling - there is a place for the playmaking 3 in our offense (Garcia and T-Will being the obvious examples) but Wayne has had Siva and Russ and other better playmaking guards.  He could be a spot-up 3 point shooter but outside a few hot streaks he never was consistent enough there and he wasn't as good a three pointer shooter as Luke.  With Jones, Rozier and Snider (more on him in a bit) all expected to create offense in our, uh, offense, I'm just not sure how to Maximize Wayne.  Overall, I love reading stuff like this but if he can play good defense, hit open 3s and stay on the court 30+ minutes a game, that's going to be a huge piece of the puzzle.  Not sure about how "clutch" he is since he was never in a position to be clutch (except for the whole Final Four clinching free throw thing in 2012) but man I hope he's another (?) (a?) guy we can trust with the ball in his hands late.

Moving on, here's a check in on Trez:

TAYLOR: Last year you were a captain and a leader.  Will that role even expand this year?

HARRELL: It’s a bigger one. I was basically an assistant captain last year to Russ (Smith) and Luke Hancock, so it’s a lot bigger this year. Now I’m the actual captain of the team. I’m one of the older guys on the team, one of the veterans, so I feel like my leadership will take a huge step.

This is why I don't do real interviews with players because I could not have resisted saying "assistant to the captains?" as my follow-up question there. Anyway, excited to see Trez dunking all over fools this season and hitting the occasional mid-range jumper.  Feel like the freshman-sophomore leap under Pitino is huge but the sophomore-junior leap is a good one too, with guys like Earl, T-Will, Garcia, Siva, Russ, Dieng all being a lot better in Year 3 than Year 1 and noticeably better in Year 3 than Year 2.   We're going to need him to be a key part of the half-court offense and a huge part of the interior defense, so even if he's just "as-good" as last year, it's going to be fun to watch.  Thought exercise: has anyone regressed from Year 2 to Year 3 under Pitino, except for injury (arguably Taquan Dean) or off-court problems (like Chane last year)?  Sosa sorta stayed the same?  Is there a 3+ year player who actually has regressed under Pitino in Years 3 and/or 4?  Samardo and Caracter left.  Jerry sorta stayed the same all 4 years.  Anyway, maybe Pitino is a good coach?

So the thing that was interesting was how both guys answered questions about new players:

TAYLOR: You’ve seen some of these young guys. Who has impressed you?

BLACKSHEAR: Right now Chinanu (Onuaku) is one of the guys who stands out. Q (Quentin Snider) also, but I think Chinanu is ready to play right away. He’s a big body and once we start practicing and he starts learning what we really do, he’ll be real good.

He's like Chinanu and Snider as almost an after thought, but no seriously Chinanu is awesome he's going to be great.

Here's Trez on the same question:

TAYLOR: With all the young guys added to the mix, how good is this team?

MONTREZL HARRELL: We’re looking pretty good. I feel like we still have spots that we need to work at. A lot of these young guys need to get a lot physically stronger to get ready to play. Honestly, I feel like with the guys that are on our team, Terry (Rozier) and Quentin (Snider) really stand out to me – especially Terry. He has worked so hard on his game. He’s going to shock a lot of people this year.

He's like well Terry and Snider look good but no really Terry is awesome and he's going to be awesome forget I mentioned Snider.

That's both of them mentioning Q as their "second" guy but then kind of glossing over it. I know it's not a big deal, but I just thought it was funny.  It also makes me way more excited about Snider than I should be.  Freshman point guard, sitting behind Rozier and Jones, hometown kid in a place that is obsessed with the home town (in general, which maybe explains the obsession with home town kids who stay), I mean, let's not get crazy here.

Okay, really though, the biggest revelation of the entire article: 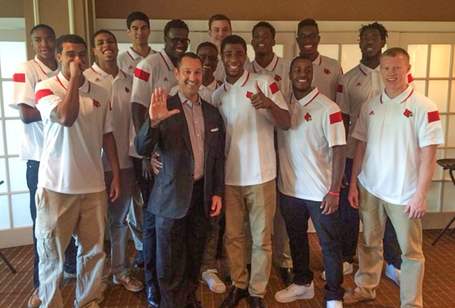 Holy crap it's Todd / Landry!  So (spoiler alert if you haven't watched Breaking Bad or Friday Night Lights) we have either an ageless sociopath whose quest for love leads to murder, obstruction of justice by friends and family and the gruesome disposal of a human body, or we have Todd from Breaking Bad.

Long way away from basketball starting, like 30 whole days from the Red-White Scrimmage, but we are at the point where every tidbit about the team helps.  Despite a lot of familiar faces, the look/feel/ceiling of this team is a bit of a mystery.  We can start 5 guys who have played in a lot of big games (Jones, Rozier, Wayne, Trez, Mangok) but how much has everyone improved and, most importantly, how good are the guys behind them?  Snider, Gill, Aaron, Johnson and Onuaku could be a great group in 2015-16, but whether any of them can contribute this season is up in the air.

And that's okay if they don't.  It's Season 1 of the Post-Expectations Era; we are going to win some games, lose some games, and get to know some new friends and enemies (and frenemies like Boston College).  Let's have some fun out there and also Snider is playing well in practice but, you know, no biggie.