Saturday's loss has done nothing to shake Mackenzie Merideth's belief that Louisville is No. 1.

The Cards still check in at No. 16 in the latest set of rankings from the Football Outsiders bros.

Only time will tell whether U of L's performance on Saturday was more about the Cardinal offense or the Virginia defense.

Consider Louisville, now with offensive guru coach Bobby Petrino and previously with first-round QB pick Teddy Bridgewater, hadn't been held under 300 yards of offense since Sept. 29, 2012. The Cavaliers limited the Cardinals to 282 yards.

In today's game story, I (well, with help from this guy) calculated the days since UVa's last win over a ranked opponent, over an ACC opponent and over an FBS opponent. Keeping with the theme, U of L hadn't been held under 300 yards of offense in not only 23 games, but 714 days.

It took the Cards eight more possessions to gain their next 75 yards.

The 'Hoos, nation's leaders in takeaways, are on pace for 52 takeaways this season. That would shatter the school's 35-year-old record of 42.

For the first time this season, U of L was shut out of the ACC Players of the Week honors.

With three interceptions through three weeks, Gerod Holliman is now tied for the most in the nation.

After a rough weekend for the ACC, the league's playoff hopes might come down to the winner of this weekend's showdown between Florida State and Clemson.

Luke Hancock photobombs are the best kind of photobombs. 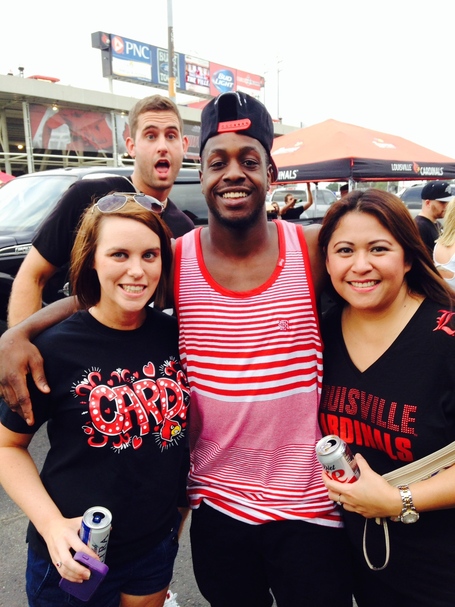 According to the Underdog Dynasty guys, Louisville will be facing the least powerful team in Conference USA on Saturday.

The Louisville volleyball team's bipolar season continued over the weekend, as the Cards followed a dominating sweep of No. 15 Arizona State with a stunning 3-2 loss to Northern Illinois.

Cincinnati Moeller left-handed pitcher Nick Bennett verbally committed to Louisville on Sunday. He was 4-2 with 39 strikeouts and a 2.31 ERA in 33.1 innings last spring.

There's a great profile of Art Carmody in the Shreveport Times which includes one of the best nicknames I've ever heard.

"My fondest memories were the bus rides. We'd go beat up on a team and then pool our money together at the gas station and buy a ton of beer and food and party on the way back home," Carmody recalled. "We'd get back to the CenturyTel Center and there would be beer cans and bottles rolling down the aisles."

Talk about your band on the run.

"Jon Norris was a great coach and we had a great staff. I'm not ashamed to say this, after we got beat by Tulsa in the playoffs in 2009, that was the most emotional I ever got after a football game. Norris opened the floor for guys to talk and the ones not from the area mentioned how much they enjoyed living and playing in Shreveport-Bossier and how much fun they had. That's when it hit me: We were going our separate ways and wouldn't see each other again."

At Louisville, Carmody says, college football was really his job. With the Battle Wings, things were different. Yes they got paid---$200 per week and an extra $50 for a win---but they played the game because they had a passion for it. Everyone had jobs that paid the rent, the Battle Wings were the side project that kept the juices flowing. Carmody's business then, as it is now, was banking. "They called me Arty McFly, because I would show up at the arena for practice still wearing my suit."

Marcus Smith isn't playing much in Philadelphia yet, but one reporter in the area thinks the resulting freakout from Eagles fans is just a bit over the top.

The 11th-ranked Louisville field hockey team bounced back from a tough 3-2 double overtime loss to Virginia on Friday with a 4-3 overtime win over William & Mary. The win moved the Cards to 5-1 on the season.

Your recap of the week that was in Cardinal sports:

Saturday's loss dropped the Cards from third all the way down to eighth in the latest ACC power rankings from ESPN.

And finally, Mark Ennis and I are back on the air tonight from 6-7:30 on ESPN 680 and ESPNLouisville.com. Saturday's game and what it means for the rest of the season will be the hot topics.