A variety of discussion loosely centered around the relationship between hair and soccer that ends up wandering into Louisville's demolition of Duke this past weekend.

The first thing that needs to be addressed today is the picture at the top of this article and how the soccer hair game has changed. The similarities in hairstyle across the board here in the 1983 Duke Men’s Soccer team picture are remarkable, nay, laudable, as is the sheer amount of hair involved here.

If there’s one thing the '80s consciously ignored, it’s the principle that less can be more. The folks who lived and thrived in this glorious decade realized how ridiculous a proposition "less is more" is, because seriously, more is more. It’s never been more obvious than it is right now looking at this picture of the ’83 Duke men’s squad. Other good illustrations can be found in pictures of Poison, Bon Jovi and Def Leppard.

Soccer hair today has evolved into a complex and vast universe that is impossible to explore here and now due to its wildly eclectic nature, but here’s one comparison to show how, um, stylish (?) things have gotten. This guy’s name is Neymar. You may have heard of him. You also may have watched Brazil collapse without him this summer. 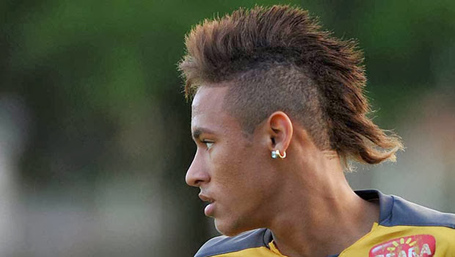 An appropriately labeled red arrow is pointing at Louisville head coach Ken Lolla in the above team picture thanks to the good people in the Duke sports info office, and even though his hair is nearly identical to everyone else’s, you can see that a trendsetter was in the making on this day in 1983 if you just make it up in your own mind and go with it. So it’s fitting, then, that Lolla dropped this lethally classy bomb of sideline fashion on Saturday night when he and his Cardinals met his former teammate and alma mater at Lynn Stadium. (Photo - Jeff Reinking, Louisville Athletics) 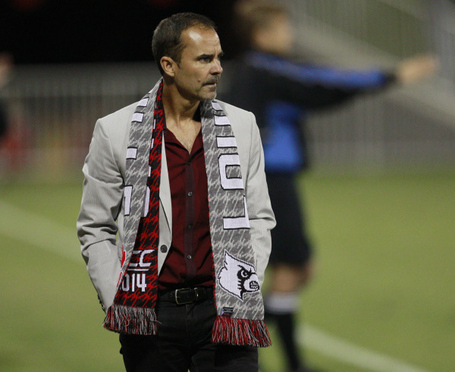 This is a game-changer. They say a picture’s worth a thousand words, but the five words in the last sentence also seem to do just fine. You’re probably wondering about the game, even though you may have seen the final score already, so let’s get to that.

- This weekend’s match marked Louisville’s first-ever ACC conference match. The P.A. announcer said something like, "OK, fans, let’s play ACC soccer!" before kickoff. It was on par with other things that have happened for the first time in your life that have made you feel happy.

- You can also check out a full recap and post-game comments from Lolla, Strong and Vitalis here.

- As the score indicates, the Cardinals dominated from beginning to end, doing all of the things we’ve talked about before here about this team. Possession had to have been at least 75%-25% in favor of Louisville, and they had literally all of the chances. They did other things well too, including but not limited to re-pressuring after turnovers, turning the Blue Devils over and turning simply having the ball into having the ball in spots that can create goals.

- The attacking prowess that we’ve said will come eventually came on Saturday. In the post about the Cards’ last home game, we talked about freshman right back Tim Kubel surging forward down the right side and getting involved in the attack. Then we talked about how this would likely create meaningful chances and goals soon. If you want to rewind the highlight video to the beginning, you’ll see that this all happened to create the first goal against Duke. Also, Will Vitalis’ nifty back-heel finish was just oozing with class. As Lolla said at media day in August, Vitalis is special.

- Four goals followed Vitalis’, one of which came minutes later just after five minutes had eclipsed in the match when Ben Strong (another name you’ve definitely read here before) finished one of his two goals on the evening. A transfer from Virginia Tech who couldn’t play last season, Strong has been in the Cardinals’ plans for a while now, and it’s coming to fruition. Both of his goals (particularly his second) on Saturday were clinical finishes, and he’s another piece of the Louisville attack that can make the Cards extremely dangerous.

- There are a lot of "fearsome foursomes" in sports history, but it’s likely that Vitalis, Strong, Ricardo Velazco and Andrew Brody are way better than all of them. Hall of Fame, schmall of fame, 1960’s L.A. Rams defensive line. Canton isn’t that exciting anyway (Canton’s pretty cool but that’s not the point).

- Louisville’s other two goals came from senior midfielder Santiago Velez and sophomore midfielder Romi Hernandez. They may not have been sparkling finishes of glory, but they were far from open-net nudge-ins. Two textbook finishes from two very technically sound midfielders.

- When the soccer Cards opened the 2014 season and Lynn Stadium with a win against Maryland, it was an excellent win against an excellent team. Saturday night was the best Louisville has looked early in the season from a standpoint of asserting themselves and their style for 90 minutes and burying an opponent. Duke wasn’t overly impressive, but the story of the night was Louisville’s sharpness by far.

- The attendance was 3,959, another fantastic showing from the increasingly rabid Louisville soccer fan base.

- Some guys exclaimed, "play ball!" after the national anthem, which didn’t quite fit the moment but was a good effort anyway.

- Two ladies sitting in the crowd had matching soccer ball-themed hats on, which was neat.

- Saturday’s win came on the heels of a tough loss on the road at St. Louis. The Billikins seem to have the Cards’ number when they have them in their house, but a statement win this past weekend should do more than just get Louisville back on track.

- In Top Drawer Soccer’s latest rankings that were released earlier Monday, Louisville is now #10. ACC ‘mates Notre Dame (#2), North Carolina (#6), Virginia (#7), Syracuse (#14) and Wake Forest (#22) joined them. Yes, the ACC is that loaded. Notre Dame, Wake and Syracuse are all on Louisville’s schedule this season. The new NSCAA rankings were not available at the time of publishing, but you can find them soon here.

Saturday was a fun time at Lynn Stadium and a stark contrast from the last home match against Cornell (a scoreless draw). Louisville introduced themselves to the ACC appropriately, Ken Lolla made another fashion statement (albeit with a bit less hair) and his team made a bigger statement on the pitch. There’s a long season ahead, but as the Cards begin to hit their stride, the rest of the opponents on their schedule should probably be concerned. A trip to Boston College on Friday is next.