Will Gardner hurt by his mechanics and inexperience

Many fans are ready to bury Will Gardner after Saturday's loss at Virginia. It's too soon to simply write him off and go with a true freshman. But, there are some simple things he must do better to be a more effective quarterback.

Share All sharing options for: Will Gardner hurt by his mechanics and inexperience

Reading various social media outlets and taking nearly two-dozen calls on the postgame show following Louisville loss at Virginia on Saturday, it was easy to get a good sampling of Louisville fans and their opinions on what went wrong. Most are quite sure the biggest problem facing the Louisville offense is Will Gardner, and I get the feeling many would like to see a change at the position. While Gardner has issues that are wholly his own which he must improve upon, there are a number of interrelated issues with Louisville's offense that make it difficult to pin the loss and the offense's struggles solely or even largely on him alone.

Will Gardner often makes fundamental, mechanical mistakes when throwing the ball. That's nobody else's fault but his own. This has been a known concern of the Louisville coaches going all the way back to spring practice. In an April ESPN article, Gardner's need to improve his footwork is noted. In August, Petrino noted it again in this Courier-Journal piece. It's the sort of coach speak thing fans often tune out but it is a real issue for Gardner.

I had the chance to watch the entire first quarter of the Murray State game about eight feet from Petrino and Garrick McGee. There were two throws that Gardner missed on that were both so clearly the result of his footwork messing up his mechanics that both coaches were screaming at him about it before calling the next play. For example, here's Gardner making the correct read to throw to the crossing tight end, but throwing it flat footed, getting too much air under it, and having it batted down. 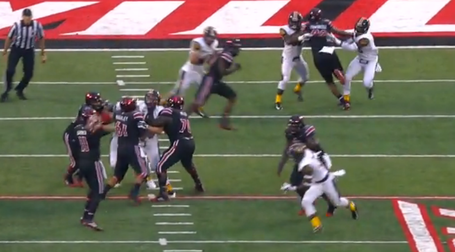 If this seems pedantic, it's not. Against a much better defense like Virginia's, Garder did the same thing on a late second quarter crossing route and overthrew Eli Rogers. The pass was intercepted and Virginia was able to get a late score out of it.

In addition to his footwork issues, it was painfully clear that Virginia had figured out that Gardner, despite being 6'5, has a very low release when he's hurrying. The picture above shows him with the ball very close to his air about to let go of the ball. Virginia batted down seven passes on Saturday and said afterward that they'd noticed his low delivery would give them a chance to bat down the closer crossing routes that are such a big part of the Petrino offense.

Closely related to Gardner's mechanical issues is his decision making. It's not bad, but it's not as quick as it needs to be. Louisville fans are probably a bit spoiled by having watched Teddy Bridgewater for two full seasons. Teddy anticipated what defenses were doing, make split second decisions, and threw with precision better than most college quarterbacks. It's not fair to expect that from Gardner right away. But, he can be better. I don't know that there have been many plays where Gardner just made a plain old wrong decision where to go with the ball. But there have been many where his primary target has been covered and in working through his progression, he's a second late in throwing the ball. To compound things, when he's rushing, he reverts to his crummy mechanics.

All of these things are further compounded by the struggles with pass protection by the quick side of the offensive line (particularly Ryan Mack). Even something as simple as staying engaged with the man you're blocking so they can't get their arms up was an issue for the offensive line. Eric Wood noticed it.

I'm about sick of all these batted balls for Louisville. Stay engaged with your block and hit the throwing lanes!

Much like when Gardner has poor mechanics when he is slow to make a read, he's even worse when he has constant pressure in his face. The mechanics are on him, but it's hard for any quarterback to be overly effective when they're consistently under pressure almost from the snap.

I would urge fans to be patient with Gardner. Coaches haven't really knocked his decision making and in the months leading up to the season, they repeatedly praised his leadership. Teddy Bridgewater's third game as Louisville's quarterback was a 14-7 loss at North Carolina in which he was 19 of 30. It was a tough game for the entire offense. Quarterbacks can improve over time and there's simply no way to get seasoning as a player without being out there and going through games like this. If these issues persist over the season, fans know Petrino won't put up with it.