Joe and Maddie Weber are counting down the seconds until they get to watch Louisville's ACC road debut. And if they get to watch Kentucky lose to an opponent for a 28th straight time afterward, that's cool too.

The calvary is on its way.

Or already there...in some cases.

A Lynchburg newspaper takes a look at Virginia's new "rivals," and notes that the last time the two teams met, Louisville wasn't even in a conference. Now the Cards roll into Charlottesville as members of their third different league in as many years.

Lorenzo Mauldin is a projected first round draft pick according to the latest 2015 mock from CBS.

32. Seattle Seahawks -- Louisville DE/OLB Lorenzo Mauldin: The rich get richer. Seattle has a formidable defense and a lot of options when it comes to this pick, including pass rusher. Mauldin has played defensive end and linebacker over his time at Louisville, showing the ability to effectively play both positions and be a threat collapsing the pocket and stopping the run.

After suffering a shocking loss to Appalachian State and the first home defeat at the hands of Kentucky since 1993, the Louisville volleyball team bounced back in a major way this afternoon with a dominating 3-0 sweep of No. 15 Arizona State. The 2009-10 U of L men's basketball team thinks this squad is a little too up-and-down.

The ladies will look to consolidate their big victory tonight at 7 when they take on Morehead State.

Your preview of the Louisville men's soccer team's ACC opener against Duke Saturday night at 7:30 inside Lynn Stadium. The Blue Devil folks have their own preview of the match.

Yet another publication has the Cards on upset alert this weekend.

It can be easy to take an opponent lightly that just won for the first time in 350 days, as the Virginia Cavaliers did by beating Richmond Saturday. However, the Cavaliers could be a tricky opponent for new league foe Louisville. Virginia won't be intimidated by the Cardinals after playing top-10 UCLA tough in a one-score defeat to open the season. Louisville is looking for its ninth consecutive win, but nothing will come easy for Bobby Petrino's team as they adjust to the grind of the ACC in their first conference road game.

UVA has not one, but two quarterbacks capable of moving the chains and putting points up on the board in Greyson Lambert and Matt Johns. As coach Mike London said: "I'm content with anybody that can help us win or whoever the guy is back there - making it happen for us ... right now it's been productive for us, and we'll continue to do that until it proves otherwise." Virginia will need both signal-callers to play well in hopes of controlling the time of possession and keeping Louisville's high-powered offense off the field - the Cards put up 66 against Murray State their last time out.

Streaking the Lawn's GIF preview of tomorrow's game ends with Tommy Pickles and a Cavalier victory.

Andrea Adelson (of ESPN fame) has a sister-in-law who went to UVA for law school, and she was cool enough to offer up some suggestions for Louisville fans heading to Charlottesville: 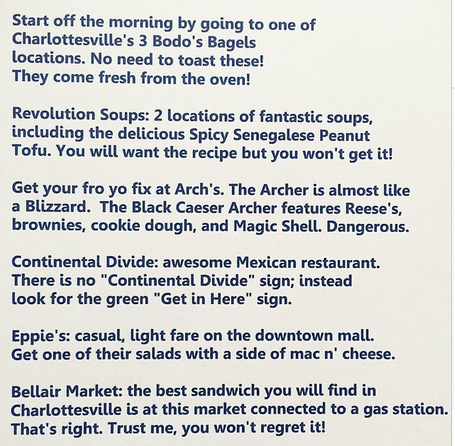 Aaron Brenner of the Post and Courier in Charleston is the first media member I've seen who likes Louisville big on Saturday.

Judging strictly from the number of people who have messaged me in the last two days saying they've seen Michael Dyer limping badly around campus, I'm going to go ahead and say that he's either the world's greatest (and most unnecessary) actor, or he's not going to be making his 2014 debut tomorrow.

Grandmas keep accidentally tagging themselves as Grandmaster Flash on Facebook.

We need someone to call someone else an a--hole really fast.

This burgeoning #Louisville "rivalry" seems to be based on mutual respect and a shared love of healthy competition. This will never do.

According to Scout, your current top five college hoops classes for 2015 are Louisville, Arizona, Duke, Syracuse and Ohio State, in that order.

Congratulations to Angel McCoughtry on being named second team All-WNBA on Thursday.

Champions Sports Bar is hosting a lunch series with Bobby Petrino this fall, and tickets are on sale now. Petrino will be taking questions from the fans and will be speaking "candidly" about the Cards. 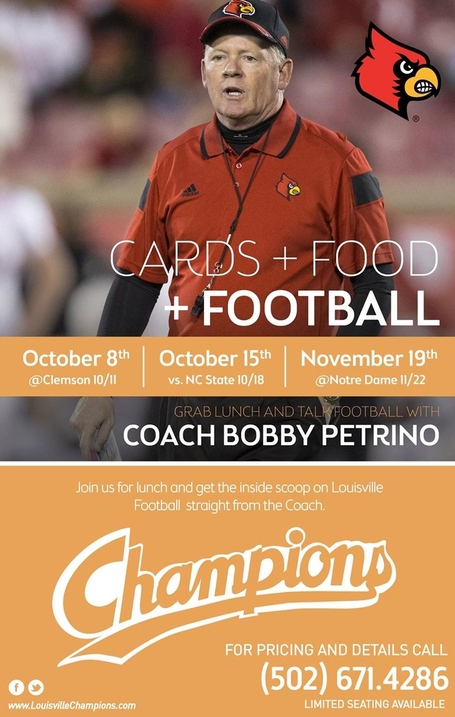 It would appear as though Preston Knowles dropped 20 points yesterday in Israel. No comment yet from Lil' Buckets.

I will never, ever get tired of dogs named Teddy wearing Teddy Bridgewater jerseys.

Cincinnati won't play its first game of the season until tonight, which is super weird. They're turning into college football's Gollum now that they're without the Keg of Nails and have no way to get it back.

Ralph Russo of the AP likes Louisville in a tight one, 24-20 tomorrow.

A preview of this year's locker room party with Bill:

If Virginia doesn't run the ball effectively against Louisville tomorrow, then it could be a long afternoon for the home team.

Cavalier Insider gets to know Louisville via a Jeff Greer Q&A.

Just touched down bout to cause hell #BeatUVA

"Rivalry Weekend" actually gets started tonight at 6 when the 11th-ranked Louisville field hockey team takes on Virginia in Charlottesville. A win would give the Cardinals, who were picked to finish last in the ACC at the beginning of the season, the best start in program history.

Vavel, the "International Sports Newspaper," offers up its keys to tomorrow's tilt:

Key to the game for UVA: Virginia needs to come out firing. Throw the ball like they did in the previous two games, and they will be fine. If they can hold their own against a top-notch UCLA football team, they can surely do it against Louisville.

Key to the game for Louisville: Let the defense play their game. Hold the Cavaliers to less than 120 yards rushing and less than 200 yards in the air, then they should pull out the win. Louisville has to take this game seriously against a seemingly inferior opponent.

Any U of L fans in Chicago who are planning on making the trip to Notre Dame, here's a bus opportunity for you:

Comcast serves up five things you should know about Louisville-Virginia, and thinks the Cards win convincingly.

Your standard AP preview for tomorrow.

Playing on the road is typically more of a challenge for the visiting offense than it is for the defense, but Todd Grantham and James Burgess know the Cardinal D needs to step up their game (or at least keep playing as well as they have been) on Saturday.

I've been pleased with our progress," defensive coordinator Todd Grantham said. "I think the guys have continued to work. I thought the first group on Saturday did what they had to do, really took care of business. They went out a did a solid job."

The Cardinals are doing the most important thing a defense can do, and that is stop the run. Louisville is yielding just 55.5 yards per game after allowing 41 in the 66-21 victory over Murray State last Saturday.

However, those two games were at home and the Cardinals must take to the road for the first time on Saturday versus Virginia.

I think it'd be more hard for offense, just because of the crowd getting into it with their defense," linebacker James Burgess said. "But defensively, it's a lot better because it's quiet when their offense is on the field. It gives us a chance to get into all of our checks."

Via Greer, here's a stat no one saw coming before the start of the season: Louisville is one of just four 2-0 teams to have only one or zero 30-yard passing plays so far this season. The other three are Pitt, Nevada and Virginia Tech.

Against a Cavalier defense that loves to take big gambles, I can't imagine U of L winning on Saturday without that stat changing.