A strong and moving shot from the 9/11 Memorial via Mark Kull. My thoughts and prayers are with all those across the world who need them just a little bit more today.

The ACC folks over at ESPN are predicting a close game in Charlottesville this weekend, and one of them likes U of L to taste defeat for the first time this season.

Adelson: As great as the Virginia defense has looked, the offense remains a major question mark. Despite its recent failures when using a two-quarterback system, the Hoos have once again decided to go that route with Greyson Lambert and Matt Johns. No matter who has played, Virginia remains near the bottom of the ACC in total offense and scoring offense. Meanwhile, the Cards have been effective with quarterback Will Gardner leading the way. Despite losing receiver DeVante Parker for the start of the season, Louisville has gotten other playmakers involved. Dominique Brown is fifth in the ACC in rushing, and tight end Gerald Christian has been as effective as expected, with nine catches for 91 yards and two scores. Louisville ranks No. 6 in the nation in rush defense, and the Hoos have had a hard time getting Kevin Parks going. If Louisville shuts down the run, Virginia will not be able to rely on its passers to keep up with the Cards. Louisville 23, Virginia 17

Shanker: I lacked the moxie to pick Virginia over UCLA in the opener, and, while the Bruins ultimately won, it feels like a loss as far as picking an upset special. But with a second game against a ranked opponent within the season's first three weeks, I'm calling for Virginia to hand the Cardinals their first ACC loss. I start with the Virginia front seven against the Louisville offensive line. While Miami has an improved defensive front, the Hurricanes are not a team that is going to rack up four sacks often, but that's what they did against Louisville. Twice Gardner put the ball on the ground. Virginia is seventh in the country with eight sacks. Gardner is making only his third career start, so the Cavs will likely dial up some exotic blitzes, and Virginia's top two sack artists are linebackers. Virginia could eliminate the Cardinals' arguable top receiving threat in tight end Gerald Christian, too, as there might not be an ACC team with a better safety combo than Quin Blanding and Anthony Harris. To recap, it's the Virginia defense that registers this win if the offense can just avoid turnovers -- Louisville has 62 points off them -- and put together just a few drives. Virginia 17, Louisville 14

Louisville's national championship odds have gone back up from 50/1 to 75/1 since last week, making the Cards tied for the 22nd choice to win it all. Florida State is still your 9/2 favorite.

State of the U likes Louisville to pull away from Virginia in the 4th quarter on Saturday.

Re-reading this year-old longform piece on Bobby Petrino, there's a blurb that I thought was extremely interesting.

His summary of Manziel is framed proudly around his own beliefs, that mobile quarterbacks that can also operate as accurate pocket passers are ideal. One suspects what drew him to Manziel's tape wasn't necessarily the quarterback winning the Heisman or Texas A&M's success, but that some other coaching staff might have developed a scheme superior to his.

"And I really didn't think it was a lot of scheme. I thought it was the guy making a lot of plays. He's fast, he's really, really fast. Fast when the scheme was there and he made plays and it was good scheme, and he was really fast when things broke down and there wasn't a play there and he could go make it himself."

"So just that ability I think, what you're seeing more than anything is the recruitment of and the development of the quarterback that can do both, run and throw it."

The AP tabs Louisville/Virginia as the ACC Game of the Week.

DeJuan Wheat will be throwing a birthday/homecoming party next month. The details are below: 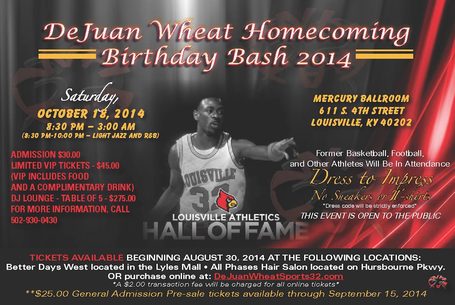 Marc Summers wants to host a remake of the original "Double Dare," news which would have had my full support 10 short months ago, but now leaves me preparing to boycott any station that green lights him. Someone at Nickelodeon doesn't like you, Marc? I'm shocked.

Things are not going well in Austin.

Senior cornerback Quandre Diggs said that he wanted to tear the signs down, but was afraid of repercussions from the coaching staff.

"It's hard to get a read on Coach Strong, honestly," Diggs said. "I wanted to be one of the guys who ripped it down, but I didn't want them yelling at me wondering why I ripped it down. I've ripped down a couple of signs they weren't happy with me ripping down."

So the communication is clearly failing to some extent on both sides -- Strong letting his players know what is and is not acceptable and his players having a healthy fear of reprisal for breaking a core value that could led to a suspension or something much more benign like tearing down a sign that could get them sent to The Pit to spend time with strength and conditioning coach Pat Moorer.

Until Strong completes his training of the players in his efforts towards major and complete culture change at Texas, being extremely clear about his expectations instead of hoping that the team acts a certain way may be more productive.

Todd Grantham talks with the media after Wednesday's practice.

Both Louisville and Virginia lost a rivalry series when the Cards replaced Maryland in the ACC, but there's not quite a rivalry between the Hoos And U of L just yet.

That said, the ACC is definitely trying to make Louisville/Virginia a rivalry, but even if it does wind up happening, it's going to take time.

Lozo love across the globe.

The U of L men's soccer team will make its ACC debut on Saturday against Duke, the same program that Cardinal head coach Ken Lolla suited up for in the '80s.

If you're just receiving or are still looking to buy tickets for the Clemson game, here's a helpful guide to the funky seating chart at Death Valley.

Streaking the Lawn previews Louisville, and winds up picking the Cards to top their Cavaliers on Saturday.

Louisville beat Miami because of turnovers, special teams and third downs. The Hoos' coverage teams have been very good so far this year, and hopefully that can continue. The other two aspect factors are more concerning. The Hoos have been turnover prone, and have often been stuck with long 3rd downs.

The Hoos offense can be successful, but they need to be less predictable and more assertive. Murray State scored 21 points (although 14 of those came long after the game was decided), and the Hoos can do the same. Getting into the endzone a few times early will keep pressure on Louisville and maybe force them into a couple of mistakes. The Louisville - Miami game turned on a KR TD from Louisville. A bit play from either special teams of defense could absolutely be the difference in this game.

Ultimately, I think the Hoos defense can slow down Louisville's offense. Gardner is a good QB, but he's young and he can be rattled. If the Hoos' front 7 can slow down Louisville's ground game, Petrino may get impatient and put hit young QB into difficult situations. This would play into the Virginia defense's hands. Unfortunately, I don't have confidence that the Hoos' offense can generate enough offense to stay in the game. The defense should play well enough to win, but the offense will just give that right back to Louisville.

The spread in this game is only 6.5 to Louisville, which seems low considering the Hoos haven't won an ACC game in 22 months. Our coach is a better person, but Louisville's is a better coach. And they are probably more talented.

STL also breaks down the numbers for Saturday.

Attendance at home games has been an issue early on this season for the ACC. Through two weeks, Louisville is the only team in the conference to fill its home stadium to capacity. 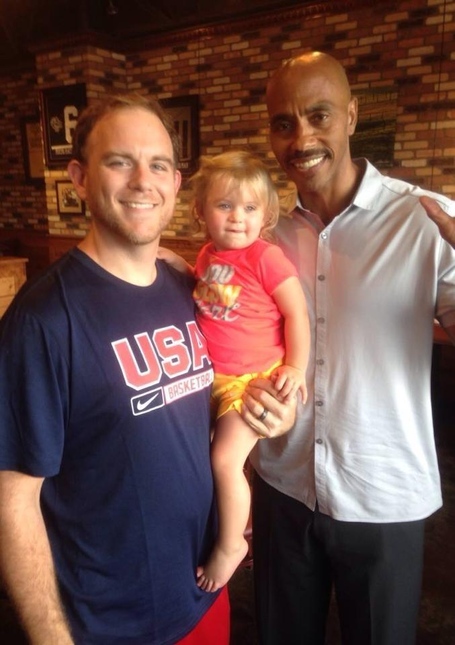 She can now enjoy Yo Gabba Gabba in peace.

Boston College is doing a pretty cool thing this weekend to honor an alum who saved the lives of 12 people on 9/11, but lost his own in the process.

Even though Rick Pitino denied it a few months ago, it appears that Louisville and Minnesota are, in fact, talking about a home-and-home basketball series.

During a news conference, Rick Pitino joked that his son spent summers "drinking pina coladas on a beach somewhere," adding, "We're not doing that."

Richard got the gag, but it seemed a little early.

"I laughed when he said it," Richard Pitino said Tuesday. "He was just joking around. My biggest thing was it was (July). I'm not dealing with that right now. We'll deal with it in November."

Basketball season is coming soon enough. During an interview with the Pioneer Press, Pitino discussed a range of topics, including playing Louisville this season -- and possibly next season.

Q: Will you play Louisville at home next season?

A: We're talking about it. It's not set in stone, but we have talked about it. If Louisville doesn't happen, we're definitely looking to start a home-and-home (series) with some type of marquee opponent next year. There are so many components that go into scheduling; it's not as simple as everybody thinks. We have to do, obviously, what's best for our fans, but as well we have to figure out what's best for each team moving forward.

Q: When you played Louisville as coach at Florida International, people didn't expect you to really compete in that game.

But at Minnesota, they will, right?

A: I'm going to expect us to compete with them. We played at Michigan State last year; it went to a Sweet 16. We played Wisconsin three times (winning once). We played great teams in our conference. We respect Louisville, but we're one of the best conferences in all of college basketball. We're used to playing great teams, and that will be another great one.

ESPN has updated its class of 2015 hoops rankings, and is the latest network to say that Louisville currently has the best class in the country. You can check out the individual rankings -- which have all four Cardinal commits in the top 51 -- right here.

And finally, if you're watching the game out-of-town on Saturday with other Cards fans, shoot me an email or comment on this post with where that location is going to be. I'd like to have our first "where we're watching" post of the season up tomorrow afternoon.