Mason Sanders was just informed that not all game weeks are only five days, and that he has to wait until Saturday to see the Cards play again. I think he's handling it well.

The evening on Tuesday didn't go quite as swimmingly as the day had for U of L sports, as the men's soccer team fell 1-0 at Saint Louis, and the volleyball team lost at home to Kentucky for the first time since 1993.

On the bright side, the volleyball team did set a new attendance record, which is cool. If you find yourself looking for something to do this winter and there's a match that day or night, I highly recommend the experience. It moves quickly, it's exciting, and there's a mass celebration after legitimately every single point. Good times. 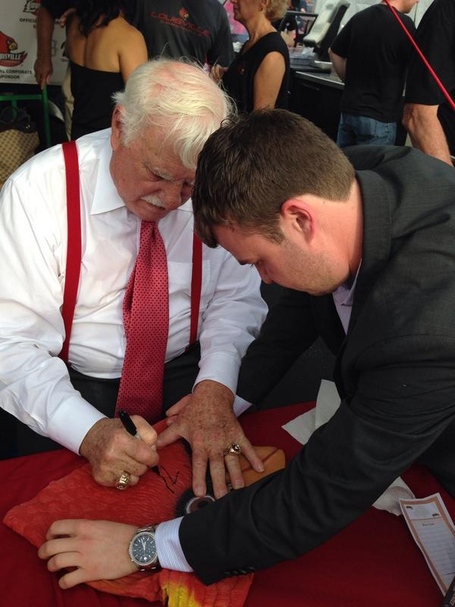 Louisville is one of the ACC teams on upset watch this weekend.

No. 21 Louisville at Virginia, 12:30 p.m., ESPN3. Line: Louisville by 7.The Cardinals hit the road for the first time this season to face a much-improved Virginia team boasting an opportunistic defense that is tied for first in the ACC with nine takeaways and second in the league with nine sacks. While Virginia remains unsettled on offense, the improvement alone on defense should make this one more challenging than it appeared before the season began.

L.J. Scott met with the media after Tuesday's practice, and came off sounding like a 10-year NFL vet. That's a very impressive young man.

Barton Simmons of 247 weighs in on the commitment of Amonte Caban.

Whether it was Louisville's dominating performance against Miami during prime-time or its two first round NFL draft picks on the defensive side of the ball in the spring, Louisville is more than just Bobby Petrino's offense. Petrino's latest commitment in proof of that.

Amonte Caban committed Louisville on Tuesday morning, choosing the Cardinals over South Carolina and Tennessee. Most expected him to land at South Carolina. The pickup, is a strong get for Petrino and defensive coordinator Todd Grantham. Caban is a raw, but extremely high energy defender. He's very active in pursuit, creates big collisions when he gets to the ball carrier and he plays with the kind of effort that is going to be fun for the Louisville staff to work with. Right now, Caban is a sideline-to-sideline linebacker that gets to the football quickly once he sees the play develop. As he learns to diagnose plays quicker and be quicker with his keys, he'll have a chance to really take his game to the next level.

In addition to Caban's ability on the field, he's a good representation of what Louisville is doing on the recruiting trail. If you look at Petrino's 2015 class, it consists of prospects from Alabama, Florida, Oklahoma, Georgia, Mississippi and Tennessee. Louisville has a fully regional approach and the staff is doing a good job of getting the best prospects that the primary in-state powers are passing on. That's a recipe that works in the southeast.

Garrick McGee meets with the media after practice on Tuesday:

As of this morning, both of Virginia's quarterbacks have told the media that they still aren't sure how the QB rotation against Louisville is going to work.

@CardChronicle - Since a CCBM didn't show up... I had to take matters into my own hands. pic.twitter.com/Kp8YCQBA8j

He's the closest thing to Batman that Louisville has.

With his class of 2015 recruiting seemingly shored up, Rick Pitino spent his Tuesday in New Jersey visiting with class of 2016 star Tyus Battle.

U of L's current recruiting pitch for Jawon Pass:

Attendance has been a big issue at Virginia so far this season, something UVA fans hope takes a positive turn when the Cards come to town on Saturday.

Virginia's home opener against UCLA drew a crowd of around 44K fans, which was the lowest season-opening crowd since 1998. The win over Richmond drew a modest 34K fans (full disclosure: even I stayed home for that one), which Doug Doughty reports was the lowest-attended game Virginia has had since 1989. Attendance should be better for Louisville, but Virginia's administration needs to pull out all the stops to get people to Charlottesville for what could be the pivotal game of the 2014 season. The history, unfortunately, doesn't bode well.

After selling nearly 40K season tickets in 2006, Virginia has seen attendance steadily decline alongside the team's fortunes. The Cavaliers have had just 2 winning seasons since 2005 and Virginia fans have responded at the box office. Virginia sold a mere 23,500 season tickets this year, according to a Washington Post report.

But through two weeks, Coach London's team has given the Virginia faithful reasons for optimism. The defense looks great. The quarterback situation is better. Takeaways are up and turnovers are down. Virginia didn't fold down 21-3 against UCLA, which was an improvement. This version of the footballin' Hoos is an easy group to cheer for. It's time fans and administrators rallied around them.

Hangin' with Darrell Griffith and landing top-rated recruits, that's just what Jeff Walz is about.

Defense has been Virginia's strength through the first two weeks of the season, a trend which needs to continue as games against Louisville and BYU loom.

Cardiac Hill's (Pittsburgh) ACC power rankings have the Cardinals at No. 3 behind Florida State and Virginia Tech this week.

U of L's road equipment truck is quite bad ass: 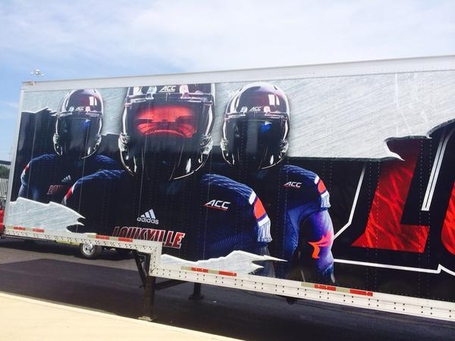 Some Saturday game notes from the UVA side of the things.

The KFC Yum Center is having a contest to determine who will sing the national anthem at the October NBA exhibition game between the Heat and the Pelicans. My support lies with Jamon Brown.

Tom Jurich was not BS'ing when he said the biggest winner in the move to the ACC was the University of Louisville.

The St. Louis Post Dispatch tells the story of Louisville's loss to SLU on the pitch last night.

The women's basketball tip-off luncheon is set for Tuesday, Oct. 14. 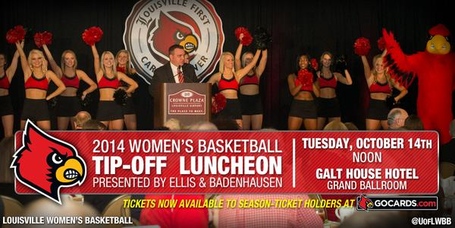 Capitalizing on the bizarre phenomenon of every sports fan base being more obsessed with the future than the present, ESPN has released a set of college hoops "future rankings," which attempt to predict the programs that are best set up for success in the coming years. Louisville checks in at No. 4 (Insider), behind only Duke, Kansas and Kentucky. 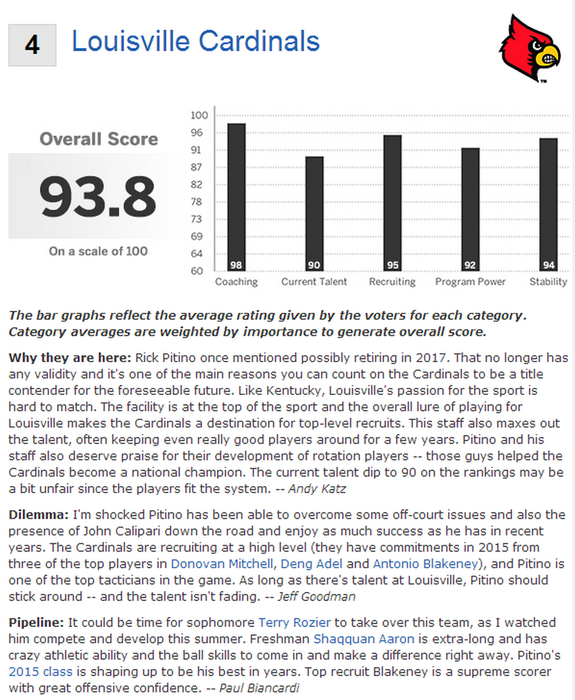 And finally, a victory on Saturday will give Louisville football three consecutive 3-0 starts for the first time in program history. Pretty crazy.