This is your 856th and final reminder to wear black to tonight's game. Don't forget, don't wear something else because it looks better or is more adaptable to the weather...wear black. Miami fans are all planning to wear white, so save yourself some extreme embarrassment and heed this advice.

The Miami Herald breaks down Monday's only game and says the game is even in every area but two, where the Cards have the advantage.

SPECIAL TEAMS: Both teams have plenty of explosiveness in the return game. Cardinals punter Ryan Johnson, a three-year starter, averaged 41.2 yards a punt and had 11 land inside the 20 in 2013. Kicker John Wallace connected on 20-of-24 field goal attempts and was a perfect 9-for-9 from 30-39 yards. He is a perfect 16-of-16 for his career from that distance. UM's new punter is sophomore walk-on transfer Justin Vogel, who has yet to punt in a college game. KickerMatt Goudis is back after going 13-of-17 on field goals in 2013, but he's not 100 percent healthy. Edge: Louisville.

COACHING: Whether he's been at Louisville, Arkansas or Western Kentucky, Petrino's offenses have always been among the nation's best. He's 83-30 in nine seasons as a college head coach and inherits a program for the first time in his career that is already good. Defensive coordinator Todd Grantham spent his last four years at Georgia where the Bulldogs averaged 33 sacks a season over the last three years and ranked in the Top 36 in scoring defense every season but last. Canes coach Al Golden (58-53 in nine seasons) brings back all but one coach from last season and finally has the NCAA cloud in the rear view mirror for the first time in his tenure in Coral Gables. In the end, Petrino's track record is better than Golden's and defensive coordinator Mark D'Onofrio. Edge: Louisville.

It's also a huge couple of days for Rick Pitino's 2015 recruiting class, as five-star guard Antonio Blakeney is already in town and will be attending tonight's big game. If you see him, feel free to let him know that Louisville suits him. Just slow down, stare at him with a knowing smile, nod and say, "Louisville suits you." No chance the kid goes anywhere else if this happens enough times.

You have ample time to put DJ K-Dogg's Week 1 Tailgate Mix to good use today.

Brian Brohm says the first time Bobby Petrino was at Louisville, the Cardinal offense could "pretty much do anything."

Major congratulations to Senorise Perry, who has successfully gone from undrafted free agent to a member of the Chicago Bears' 53-man roster.

Three out of the four ACC reporters from ESPN.com like the Cards tonight.

Why Miami will win: Duke Johnson changes everything for the Canes, as he keeps their offense moving and takes plenty of pressure off Brad Kaaya. Likewise, the loss of DeVante Parkertakes plenty of punch out of Louisville's offense. A new coach, a new league and a new quarterback create too much uncertainty around a Cardinals team that has the target on its back after embarrassing Miami last time around. -- Matt Fortuna

Why Louisville will win: It's not that I'm supremely confident in this pick, but the Cardinals have a few things going for them. First, it's a marquee game for the program, its first as a member of the ACC. Secondly, while a lot has changed on defense for Louisville, it was the top-ranked rushing D in the country last season, which should help Todd Grantham's crew deal with the dynamic Duke Johnson. Most important, however, at quarterback Miami is starting a true freshman in his first career game on the road in a frenzied atmosphere. It won't be a gimme, but Louisville will pull off the victory. -- David Hale

Congrats to the Louisville volleyball team, which opened its 2014 season by going on the road and upsetting No. 12 Minnesota in four sets.

Here's what the Canes will be putting up against U of L's all-black uniforms tonight:

Eric Wood successfully calls out ESPN for being one of the main reasons teams are staying away from giving Michael Sam a contract.

The 15th-ranked U of L field hockey team moved to 2-0 with a 4-2 home win over New Hampshire on Sunday.

Louisville is an "embarrassing powerhouse" according to The Wall Street Journal's new grid of shame for the 2014 season.

A PSA from the All-State folks:

The Allstate Tailgate Tour, a unique and interactive fan experience visiting college football stadiums across the country, will make an appearance at Louisville before Cardinals take on the Miami Hurricanes on Monday, September 1.

While on-site, fans can take part in a variety of family-friendly activities and enter the Allstate It's Good Sweepstakes for a chance to win $100,000 and a trip to the 2015 Allstate® Sugar Bowl® and the first-ever College Football Playoff National Championship. Fans can enter the sweepstakes at AllstateCFB.com.

Each week of the regular season, Allstate will reward the Field Goal Net school with the most fan conversation on Twitter with an additional $10,000 in scholarship donations.

Today marks the start of a new football life for U of L.

I got stung by a bee a couple days ago for the first time in about 10 years. The experience served as a reminder of both how painful getting stung by a bee is, and how embarrassing you feel when you complain about the pain (which is hard not to do). If you have a black eye or a really swollen bite of some sort, it's pretty easy for people to feel sympathy for you. The lingering pain of a bee sting is usually worse than both of those things, a fact which the tiny dot surrounded by mild (at best) redness does not convey at all. It's a worst-case-scenario minor injury.

In summary: I couldn't be happier that you're dead, bee that got into my sock while I was cutting the grass and made me yelp, throw my shoe and drop my headphones.

Your CCBM March to the March details, just in case you want to be a part of this glory:

Miami wakes up in a cold sweat after this nightmare. Bird masks. They're everywhere. https://t.co/GVYL9jX6Jp #CCBM @CardChronicle

Congratulations to Chris Dominguez, who has been called up by the San Francisco Giants and will be on a Major League roster for the first time. Dominguez, you may remember, was perhaps the brightest star on the 2007 Louisville team that went to the College World Series and put the program on the map. 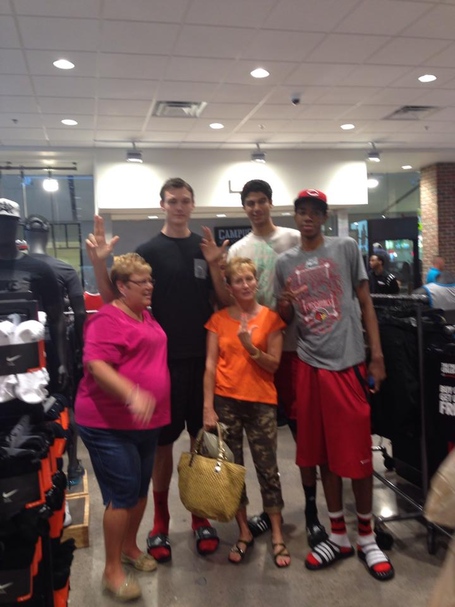 If you really want to get to know the Canes before tonight's big game, State of the U has an extremely detailed and well-written look at Al Golden's squad.

I'd be remiss if I didn't offer up a big thank you to CardinalStrong for another great offseason of Countdown to Kickoff posts. They were once again informative and entertaining at a time of year where both of those things are at a premium. Thanks for getting us from 99 to 0.