Olivia Cate Rapier is six weeks old and insanely proud of the fact that she's never experienced a Cardinal loss.

Bill Bender of The Sporting News writes about the second Petrino era at Louisville, which he expects to go swimmingly.

The KFC Yum Center is expected to have operating profit of about $1.4 million for the fiscal year that ended last month...which is good.

Pat Forde looks at Bobby Petrino and the work he still has to do on his road to redemption at U of L.

"One of the things I'm going to work hard on is coaching the person as well as the player," he said. "It's something I wonder about, whether I paid that much attention to it [in previous years]."

Petrino wasn't overly attentive to the feelings of Louisville fans during his first stay, either. They loved his offense but hated his attitude toward the school.

He went 41-9 in four seasons from 2003-06, but also serially flirted with other jobs before finally leaving for the Atlanta Falcons. It took a lot of forgive-and-forget from athletic director Tom Jurich to extend the offer of a second tenure at the school. Although the Louisville fans are generally giddy at the return of an offensive mastermind with a glittering win-loss record, they will also wait and see whether he'll burn Jurich a second time if another offer comes around. A $10 million buyout is one powerful disincentive to leave, but will it be accompanied by sincere loyalty from the coach?

"I need prove to myself and everyone else, on a daily basis, that this is the right decision [by Louisville]," Petrino said.

A good point from Adam Himmelsbach about the Ray Spalding commitment.

The C-J's Jeff Greer has all of his noteworthy stories from the ACC Kickoff together in one nice and tidy place.

This is probably the best sequence of comments related to last week's plagiarism events: 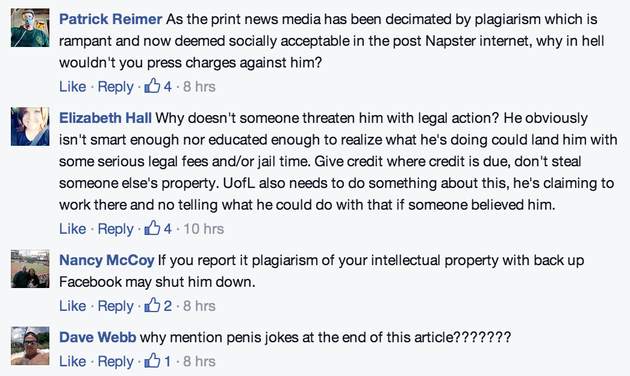 A good piece from The Star-Ledger on Breno Giacomini and the work he and Gary Barnidge have done with the American Football Without Barriers foundation they started a few years ago.

I completely glossed over this when Dana O'Neill first published her "college hoops fashions I'd change" feature last week, but Rick Pitino wanted to bust the infra-reds back out before the 2014 NCAA Tournament.

3. INFRARED, DAY-GLO ORANGE, BURN-YOUR-EYES-OFF YELLOW, ANYTHING RESEMBLING CHARTREUSE, AND REALLY ANY UNIFORMS THAT ARE A) NOT YOUR SCHOOL'S COLORS AND B) NOT IN A 32-PACK CRAYON BOX ARE NOT ALLOWED

I also saw Rick Pitino at the Breakout. He said he and his team wanted to pull Louisville's infrared adidas uniforms out for this past NCAA tournament. Athletic director Tom Jurich overruled him. I always thought Jurich was a smart man. If your team colors are blue and white, wear blue and white. If your team colors are brown and white, well, tough luck, Lehigh, you've got to look like UPS drivers. Suck it up and blame your university's forefathers.

Tom Jurich has now made a grand total of two mistakes during his time at Louisville.

U of L has come out of left field (figuratively) to emerge as the leader for shooting guard Donovan Mitchell, at least according to the 247 Sports crystal ball.

As for the greatest Louisville athlete with his last name, Prince Ali said he wasn't aware that Muhammad Ali was from the city, but he's a fan of The Greatest.

"I love Muhammad Ali," he said.

Prince Ali's name also stands out - and he gets reminded of it often - because it's the alias of the Disney animated character Aladdin. He's not sure why his parents named him Prince, and he said that if he's ever watched the movie "Aladdin," he has no recollection of it.

"I get a lot of those jokes," he said. "People tweet me all the time. My teachers, friends. Every time somebody meets me."

He's really missing out on some unbelievable sights and some indescribable feelings. I'd say he's got about a hundred thousand things to see.

Russ Smith was one of the five biggest surprises from the Vegas Summer League.

Russ Smith (New Orleans Pelicans). Summer League often becomes the world of point guards trying to get noticed by shooting the ball. Big men with good post position go hungry while guards pound the ball into the ground then cross-over, step back and fire away. Not Russ Smith, the Louisville guard playing for the Pelicans was a real floor general. Yes he scored 16 points a game but he had 6.4 assists a game as well in Vegas. There are adjustments to be made for him to stick in the league long term (more than four turnovers a game) but he was a second round pick who looks like a guy who could give the Pelicans some steady minutes at the point as a reserve.

The Cards check in at No. 31 on Lindy's preseason top 40 countdown.

Another piece from NFL.com on Bobby Petrino and Louisville's move to the ACC.

The Biloxi Sun Herald ranks the 2004 Louisville squad as the second best in the history of Conference USA, behind only Shaun King's undefeated 1998 Tulane team.

1. Tulane 1998 (12-0): The Green Wave fell short of earning a BCS bowl bid because it didn't beat a ranked team, but it was dominant throughout the season. With offensive coordinator Rich Rodriguez calling the plays, Tulane put up big numbers and won every game by double digits. Tulane capped the season with a 41-27 win over BYU (9-5) in the Liberty Bowl and finished ranked seventh.

2. Louisville 2004 (11-1): Louisville destroyed the competition for much of the season, but a 41-38 loss at Miami prevented the Cardinals from an undefeated campaign. Louisville averaged 50 points a game behind quarterback Stefan LeFors and beat previously undefeated Boise State, 44-40, in the Liberty Bowl. Louisville finished ranked No. 6.

Speaking of that 2004 squad, their season-opening triumph over Kentucky is now on YouTube in full, and I may or may not have watched the entire thing last night when I needed to be sleeping. I did. I watched the whole thing. It was just as fun as I remembered. We won by a lot.

And finally, it's LCPT Championship Day on CC. Expect the final showdown to be posted around 2 p.m. Plan your watch parties accordingly.