This is a post that I really didn't want to have to write and one that I fear is going to come off as petty, but at this point I don't think I have a choice.

For the past several months, I've gotten a handful of messages almost every week alerting me to the fact that there was a Facebook page copying and posting stories from Card Chronicle nearly word for word. The first time this happened, I took a quick look at the page and the kid behind it, and it was a little unsettling.

The person behind the page -- now known as The Cardinal Touch -- is Justin Stinson, who claims to have studied journalism at Kansas State despite being 19-years-old. 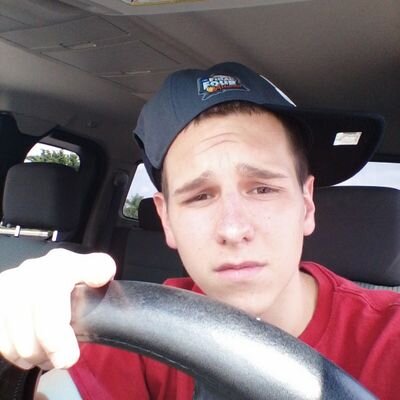 The first time I looked at his page I was pretty blown away. He had these impossible-to-believe stories about Tom Jurich offering him half year and full year contracts to run a Facebook page, he talked about spending $45,000 to create his own website, and he said he was single one day and then thanked God for his beautiful wife and house on Thanksgiving just a few days later. It was all extremely bizarre, even by Internet standards.

He had also pretty clearly plagiarized everything on his page from CC, The Courier-Journal, Louisville Sports Live, The Cardinal Connect, U of L Card Game or one of the Scout/Rivals sites. Only a couple of words from the original posts were changed, and then he'd write a line on his own at the very end, which was usually littered with grammatical errors. One time he had even accidentally(?) copied and pasted what I was wearing and eating from one of my game day posts during football season. There was never any citing or any linking to the original source of the content.

The same day I was alerted to the page, we'd posted some updated Heisman Trophy odds from the offshore sportsbook Bovada. A few minutes after that past had gone up, this guy had posted the same thing, but claimed he had "spoken with Bovada," whom he (I guess) believed was an actual person. 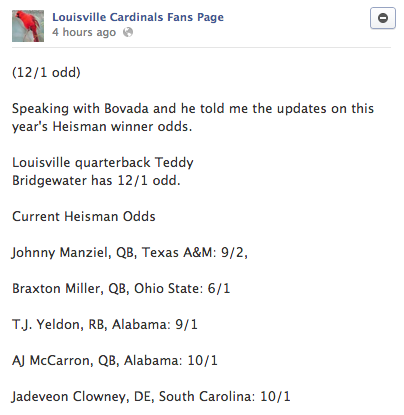 At this point, I let the kid know that I had seen what he was doing, and asked him to stop. This should have been the end of it. It was not.

The page continued to plagiarize from every other U of L site on the Internet, and, after I guess he thought enough time had passed, Stinson began to plagiarize from CC again. I decided to simply leave it alone and let the thing burn out, even when readers would alert me to the plagiarism.

Stinson recently created a Twitter account, which miraculously went from six followers to more than 20,000, back down to just over 7,000 in a single 24 hour span. As you might expect, it was more of the same. 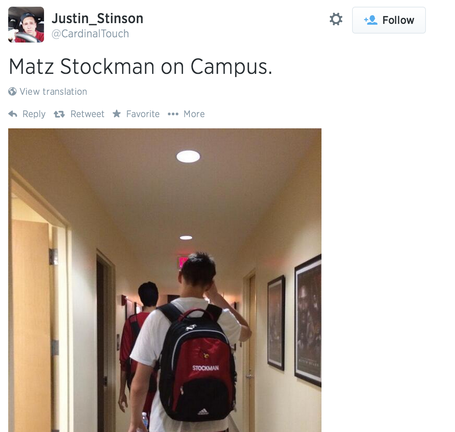 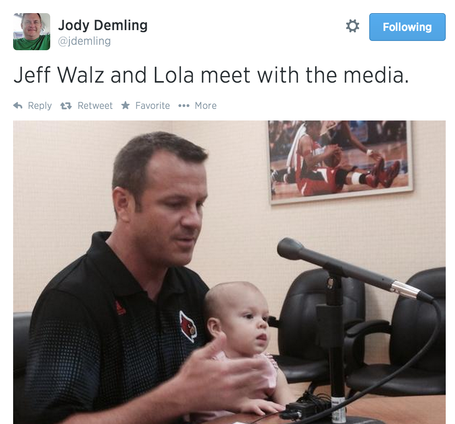 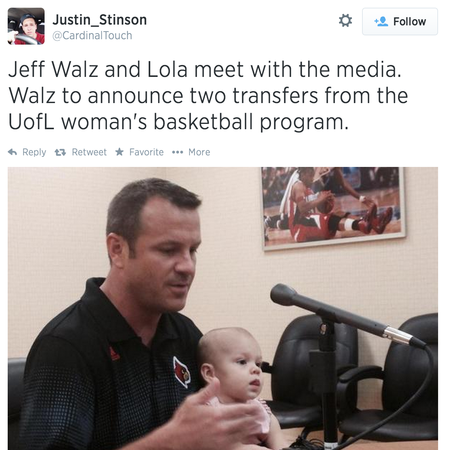 The sad thing is that his Facebook page was gaining followers, more than a lot of the sites he was stealing from, which was pretty depressing to see. It's also why, when I was alerted last night that he had copied and pasted yet another post from CC, I asked him to stop for a second time.

His next move wasn't apologetic or remorseful, it was to find me on Facebook and message me, claim that the two posts were totally different (even though he'd already deleted his), say that he doesn't even read any other websites and that "someone" at U of L pays him to do what he does. He then deleted every post on his page and wrote a spiel about "being attacked."

It's not my intention to embarrass this kid or get him attacked by people on the Internet, but this is the kind of stuff that a lot of mainstream media people love to see, and the kind of stereotypical "Internet behavior" that people like me and many others in this area have worked so hard to distance ourselves from. It's lazy, it's disingenuous (it's illegal), and it gives everyone whose work isn't attached to a major network or publication a bad rap.

I'm not asking you to launch an Internet war against this page or anything, I'm just asking that if you see this kid's "work" floating around the Internet, don't add fuel to the fire. At the very least, make the 10 second or so effort it takes to find the original creator of the work being presented and give them their due credit.

We will return to least cool person tournaments and penis jokes very shortly.