The last spot in the LCPT Final Four will be decided over the next 24 hours ("Shot at the Night" plays). 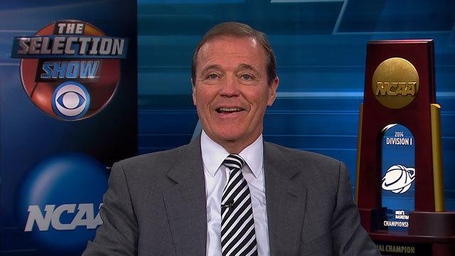 --Dealt Louisville a No. 4 seed when the major debate heading into Selection Sunday was whether or not the Cards deserved to be a one seed.

--Also placed Louisville in the toughest region in recent memory, with their arch-rival and perhaps worst matchup in the field just two rounds away.

--Selection Committee chair Ron Wellman said that Louisville "looked like a one seed" and admitted that the Midwest was the toughest region, but never really offered any legitimate justification for either occurrence.

--A tournament which was atrociously seeded overall culminated with a seven and an eight seed playing for the national title, easily the highest combined seeding of any championship game in tournament history.

--Spearheaded the bizarre over-criticism of Teddy Bridgewater in the weeks and months leading up to the NFL Draft.

--Stated concerns about Bridgewater's ability to be the "face of a franchise" after ripping Teddy's "average at best" pro day.

--Used Bridgewater taking three sacks against South Florida as one of his primary concerns while ignoring the fact that only one of those sacks could possibly be attributed to Teddy.

--Said that Bridgewater is the only quarterback in the last 10 or 11 years whose pro day made him go back, look at tape and change his grade.

--Also used the dreaded "lack of an 'it-factor'" justification in his criticism.

I'm very interested to see how this one plays out. You have 24 hours from the time this post publishes.