Cards Win, Heading Back To Omaha and the College World Series

Final Act Of Year of The Cardinal 2: Only One Thing Left To Do, Win The Whole F'In Thing.

Share All sharing options for: Cards Win, Heading Back To Omaha and the College World Series

The Louisville Cardinals baseball team is heading back to Omaha.   Freshman Nick Solak kept up his torrid post season, driving in 3 on a sac fly (small ball!) and 2-run jack (big ball!), and Senior Cole Sturgeon drove in 3 and struck out Owl DH Brennan Morgan with 2 on (meaning Morgan represented, in theory, the tying run) in the 7th to lead the Cards to a sweep of the Super Regional over Kennesaw State.

The game winner, of Defiance, Ohio, Anthony Kidston, continued his unbeaten streak by scattering 9 hits and 4 runs over 6 innings.  He struck out 7 and seriously has not lost a game in like 3 years.  That's crazy.

Nick Burdi set the school record for saves by getting the last 3 outs and the dogpile was on. 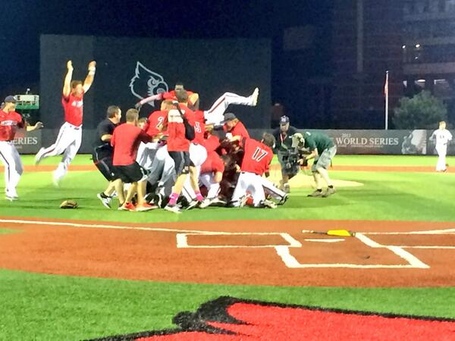 While the sequel is always somewhat disappointing, the Year of the Cardinal 2 has a chance to do what most sequels do and end on an unbelievable triumph.  The Cardinals head into Omaha with the pitching, defense and small ball identity, and, most importantly, experience to be legitimate national championship contenders, especially considering the number of National Seeds who have fallen before this point.  The Cards will also be the only one of the 8 teams from last season's College World Series to make the return trip to Omaha.  Kind of like the 2013 Louisville basketball team was the only team to make it back to the Final Four from 2012 to 2013.  I'm not saying, I'm just saying.

The teams went back and forth in the early innings, with Max Pentecost finally getting going for the Owls and driving in a couple of runs.  KSU led 1-0, the Cards scored 2 in the 3rd to go up 2-1, which lasted a half inning as KSU took a 3-2 lead that was extended to 4-2 on an infield ground out.  The Cards did their damage in the 5th and 6th.  Sturgeon singled a run home to cut the lead to 1 and was on base when Solak saw 1 off-speed pitch and crushed it to left for the 5-4 lead.  Sturgeon again came up big in the 6th, singling with the bases loaded to extend the lead to 7-4.

Zach Burdi (no relation to closer Nick Burdi) (just kidding they are brothers) faced the 11th overall pick in the Major League draft and pumped 2 major league fastballs at him, inducing a pop up and then giving way to fellow frosh Drew Harrington.  After retiring 1 Owl and giving up a senior, Harrington was replaced by Sturgeon, who struck out the tying runner and ended the threat and pitched a perfect 8th inning to set up Burdi for the record-breaking save.

The announced attendance of 6,007 broke the record for largest crowd ever at Jim Patterson Stadium.

The Cards will face the winner of tomorrow's Stanford-Vanderbilt game. Texas and the winner of Ok St. and UC Irvine are the other teams in the Cards side of the bracket.  Hey, any reason to get revenge against Texas by beating them in Omaha?

So awesome.  It's exciting, but still feels like there's some unfinished business this time around, and there's not that same level of excitement there was last year.

Only one thing left to do.