If Dwayne Morton photobombs a couple of your wedding pictures, you're going to make the front of news and notes. Congrats to Jason Dunlap and his lovely bride, Erin...and congrats also to Dwayne. Fine work, Dwayne.

U of L coaches discuss (video) why they're so excited to be a part of Bobby Petrino's staff.

Cardinal starter Jared Ruxer stated on Twitter Thursday that his Tommy John surgery went "great." Louisville's staff is going to be loaded for the foreseeable future.

Kennesaw State coach Mike Sansing announed Thursday that Tallahassee Regional MVP Travis Bergen won't take the mound against Louisville in game one after throwing 180 pitches in two appearances last weekend. Obviously, this makes Friday's contest all the more important for the Cards. You don't want to be down 1-0 and about to face the other team's No. 1 starter with your own ace done for the weekend. 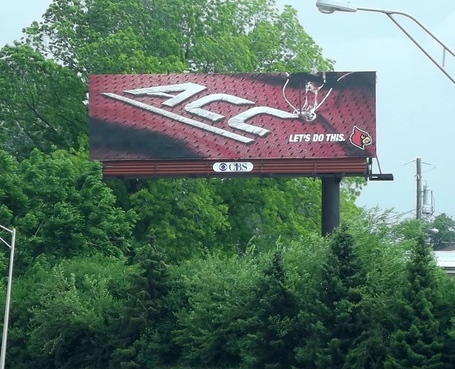 As someone who frequently utilizes "let's do this," I overwhelmingly support this effort.

Taquan Dean shares a video on Instagram of the U of L basketball team engaging in that RV pushing work that we talked about yesterday.

In related news, Taquan and his wife are expecting, and they're preparing for their big day by rocking with the best lamaze instructor in all the land, Mrs. Virginia Rutherford. She reports that Taquan is a model pupil and that he "still looks like he can rain from the parking lot."

Baseball America previews the Louisville/Kennesaw State super regional, and has an anonymous scout break down the Cards.

"From an offensive standpoint, the short game makes them go. The key for them offensively is to get those guys on base. Then obviously Gardner and Kay and those guys in the middle driving them in. The one thing Louisville does a really good job of consistently is they take advantage of everything you give them. If you give them something, they're going to capitalize on it. I believe that is the difference between a good and a great team, and they are a great team. And that's where their speed comes into play. If you walk them, they're going to take advantage because of their speed. The key is to get a Kay, a Sturgeon, a Whiting on base and running a little bit.

"Sturgeon is a ballplayer, in every aspect of it. Another lefthanded hitter for them, a senior out there, obviously can steal some bases, can run, put some pressure on you. He's a spark plug for those guys in so many different ways, and has a great arm on the mound. Whiting, when you look at Louisville, there's a lot of veteran players on that team. They understand how to be successful, don't be fooled just because he's not hitting .300-he's a good hitter, he can drag/push, use the whole field, and once he gets on base, he's stealing. And he's got a lot of walks, tough to pitch to. He understands his role as a player."Jeff Gardner's one of the best players in the country, no question. Because of the success that he's had, and deservingly so, he's the guy in a big situation that they want up, and a guy you don't want to beat you. A veteran player with a tremendous approach at the plate, and he's a patient guy. He's a very patient, smart hitter. He doesn't walk a tremendous amount, he doesn't strike out a ton. To me, without question, he is one of the best players in the country.

"Louisville plays like the team they are: a veteran, experienced team who has been in the postseason, has played in close games. Every single player in that lineup exudes that level of poise, no matter what their role is. Throughout the course of the year, they have had different guys perform in clutch situations. Kay has gotten big hits for them, Lucas has gotten bit hits for them. And when you look at their numbers, they don't strike out a lot, so that is an approach. That tells you they all understand their roles and do a good job with it. One of the keys offensively for them is to get those guys on base at the top of the lineup, and as a team offensively they feel very confident they have enough players who have proven they can hit in big situations when needed.

Eron Gordon, the younger brother of former Indiana star and current NBA player Eric Gordon, will be visiting Louisville today. Rivals has Gordon, a point guard, as the No. 35 player in the class of 2016.

The next game the Louisville baseball team wins after heading into the 9th inning with a lead will be its 100th straight in that situation. Pretty impressive statistic that a lot of guys have played a huge role in.

SI's Stewart Mandel says having Louisville on the schedule would help Florida State in a situation where the Noles lost a game and still hoped to play for the national title.

These cornhole boards, designed and made by Emily Schmidt, are pretty fantastic. 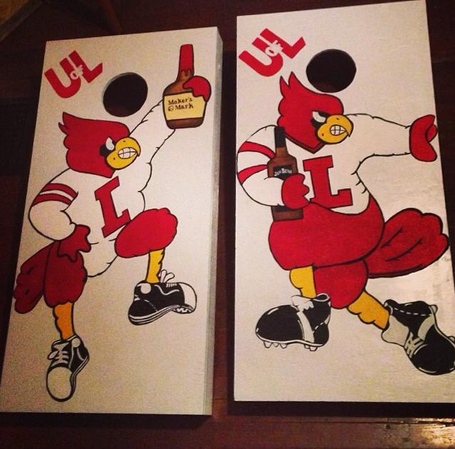 You've heard about Nick Burdi by now, but Kennesaw State catcher Max Pentecost was selected by the Toronto Blue Jays with the 11th overall pick during Thursday's first round of the MLB Draft. That young man is definitely cause for concern this weekend.

Former Georgia safety Tray Matthews says Alabama, Auburn, Florida and Louisville are the schools he is focusing on right now.

Louisville and New Orleans tied for the markets that watched the most coverage of the college baseball regionals last weekend. We enjoy watching sports here. That much has been proven in recent years.

The Louisville women's basketball team will face Iowa in the ACC/Big 10 Challenge on Dec. 4 in the Yum Center. The Cards and Hawkeyes met in the second round of the NCAA Tournament last season. The Hawkeyes did not win that contest.

Luke Hancock and Peyton Siva will be at Floyd Central next week.

The great @lukeskywalka11 is doing another skills camp at Floyd Central. Special guests include @PeypeySiva3 pic.twitter.com/SQgAvWWuAC

U of L women's lacrosse head coach Kellie Young has been selected as the North team's head coach for the IWLCA North-South Senior All-Star game on June 7.

Former Tennessee wide receiver Paul Harris, who is now one of the top-rated JUCO players in the country, will visit Louisville on June 16.

ESPN says Louisville's SEC transfers will help the Cards greatly when it comes to competing in the ACC.

1. NO BURDEN ON BURDI: Louisville's top professional prospect is closer Nick Burdi, a right-handed junior with a fastball that consistently nears triple-digit velocity and a hard, tight slider. But Burdi didn't have to do much in the Cardinals' sweep through the regional thanks to the contributions from their offense and starting pitchers. Burdi has 16 saves and a 0.54 ERA this season. The Cardinals are 41-0 when leading after eight innings.

3. GARDNER'S STRUGGLES: Louisville senior left fielder Jeff Gardner has traditionally performed well in the NCAA tournament, but the American Athletic Conference player of the year struggled in the first three games of this postseason. He went 1-for-12 with four strikeouts in the regional round. Gardner led the AAC during the season with a .575 slugging percentage and 61 RBI, ranking eighth in Division I.

4. HOT, HOT, HOOT: The Owls are among college baseball's hottest teams with 26 wins in 28 games. That surge includes last weekend's regional appearance, when they lost the first game of the final against Alabama before rebounding to beat the Crimson Tide 4-2 on Monday.

5. ROCKING ROTATION: The Cardinals' three starting pitchers in last week's regional -- Kyle Funkhouser, Anthony Kidston and Josh Rogers -- combined for 21 innings and three earned runs. The same three are scheduled to start against Kennesaw State. Louisville's rotation has thrived in the postseason despite losing No. 2 starter Jared Ruxer to a forearm injury. Ruxer last pitched May 10 and is not expected to be available in the tournament.

Rocking rotation? Not everything has to be alliterative, guys. I didn't stop reading and throw my computer out the window when I saw "Gardner's Struggles." It was fine.

A major congratulations to Rick Pitino's daughter, Jacqueline, who got engaged to her longtime boyfriend, Ryan, in Italy this week.

Italy? Thanks for making everyone else who proposed this year look like a dick, man. Seriously. I'm not joking.

TireDiscounters, you have the Card Chronicle seal of approval.

It would appear as though senior offensive lineman Chris Acosta is back on the team. Acosta had previously announced back in January that he was moving on, despite having a year of eligibility left. Good news for a unit that recently lost three bodies.

Scout has updated its top 100 rankings for the basketball class of 2015.

Steve Jones looks at U of L baseball commit Brendan McKay, who recently saw his streak of 72 1/3 consecutive scoreless innings snapped. The streak was the third longest in American history.

He's thrown two no-hitters this year and three in his career, and twice this season he struck out 20 of the 21 batters he retired.

"How many times do you see a kid go out and shut out a team in 10 straight games?" Blackhawk coach Bob Amalia said. "Any person at any level, you're going to make mistakes. Any sport it's hard to go out there and be perfect every time you play, so it was amazing."

Perfect Game offers up its preview of Louisville/Kennesaw State, and sees the Cards with an advantage in every area of the game but offense.

Budding Cardinal star Corey Ray gets some love from his hometown.

New Albany grad Josh Rogers is also getting some love back home.

And finally, I am taking off for my bachelor party in Cincinnati in a few short hours, but will be leaving you in some familiar and comfortable hands for the next couple of days. They will guide you through the opening two games of the super regional and any other madness that should arise. I will be back, in some form, on Sunday.