I believe that we will win. America. And Louisville. And Russ Smith. And human beings in general.

It's one of the biggest days in the life of Russ Smith, and while most experts don't believe he'll be selected before the middle of the second round, one thinks he'll still go on to play at least 10 seasons in the NBA. I'm on that bus.

If the draft was based solely on college careers, then Russ would be going No. 3.

The college hoops folks over at CBS recently held a mock draft for college hoops coaches, and Rick Pitino was selected with the No. 2 overall pick.

Team: Louisville
Drafted by: Jeff Borzello
Why him? I assumed Doyel was taking Calipari (as I would have done the same thing), so I had my choice narrowed down to two: Sean Miller or Rick Pitino. I think Miller is the better recruiter, Pitino the better coach. After going back and forth, I went with Pitino -- primarily because our rules say I don't need to worry about him retiring or leaving during this five-year span. Pitino consistently trots out teams capable of making the Final Four, whether they're filled with five-star recruits or under-recruited prospects. To me, Pitino is still the complete package in a head coach. He recruits, he gets guys to buy in to his system, and he always has his team playing its best basketball at the right time. He can play different styles, he can recruit different levels. Miller was a close second in my mind, as I think he's going to be an absolute star for the next couple decades. -- Borzello

Both DeVante Parker and Charles Gaines have been named to The Sporting News' preseason All-ACC first team.

If you're downtown and looking for a spot to watch today's USA/Germany showdown, the KFC Yum Center has you covered.

Grantland's Bill Simmons examines why the NBA Draft is a complete crapshoot, and redoes every draft since 1995. In the process, he labels both Terrence Williams and Earl Clark as "lottery whiffs" from the '09 draft.

As the defensive coordinator at Broken Arrow last season, Adam Gaylor had to game plan for many of the best players in the state. That includes wide receiver Dahu Green, who had been destroying class 6A in his junior season at Westmoore.

Now, as the Jaguars head coach, he no longer has to figure out how to stop Green, but he does have sympathy for those who will have that assignment when Green takes his talents to the next level in two years.

Vanderbilt won the College World Series championship Wednesday night, which means Louisville is currently holding a rivalry trophy that they took away from an eventual national champion. So that's something.

This recent addition to Minardi Hall is pretty fantastic. 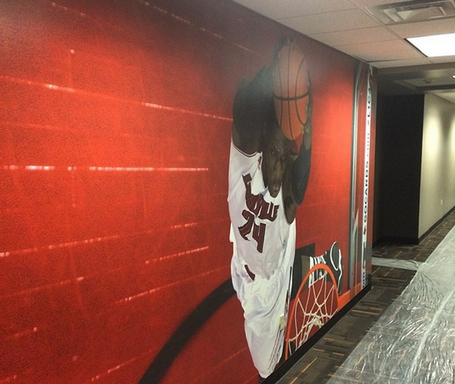 Eventually I'd like to have something similar in the hallway leading to my room. Except instead of the art depicting one of the most emphatic plays in national championship game history, it'll be a tasteful depiction of me looking confused while haunched over a laptop wearing a white t-shirt and 12-year old Trinity football shorts.

Best of luck to the artist formerly known as Chi-Daddy.

Norv Turner certainly sounds as if he's on the Teddy Bridgewater bandwagon.

Yet another sign that would seem to point towards stadium expansion:

#UofL has sold out the luxury suites at Papa John's Cardinal Stadium for the 2014 season. First time school's sold out its football suites.

The San Francisco Giants called up former Card Adam Duvall on Wednesday, and Tim Lincecum promptly threw his second no hitter in as many years. Coincidence? Yes. Still...congrats to Adam on his big day.

The Ball Up streetball tour is coming to Louisville this weekend, and offers the opportunity to earn a $100,000 contract and roster spot.

Here are the deets:

WHO: Founded in 2009, Ball Up is the leading streetball tour in the nation, featuring the Ball Up All-Stars, which includes many of the most celebrated and talented streetball players from across the country.

Kyle Lowry, the NBA star point guard for the Toronto Raptors, will coach local Louisville talent during the Ball Up tour stop.

WHAT: Ball Up is giving skilled basketball players in major cities the chance to go pro during the 2014 Ball Up Summer Tour. Players are invited to try out and compete for a contract worth $100,000 and a spot on the Ball Up roster. Families and fans can enjoy the competition and enjoy halftime musical entertainment.

I had been planning on trying out, but was just informed that I received a lifetime ban immediately after using the word "deets."

I'm linking this article simply because it's a reminder that Rutgers won a game in the AAC Tournament...and then lost to Louisville the next day by 61 points.

Gorgui Dieng and Richard Pitino molding the youth of Minnesota: 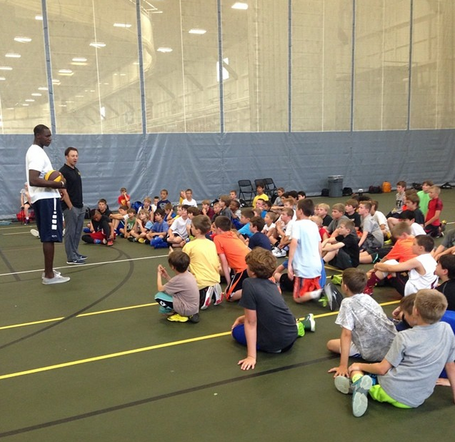 ESPN examines how Louisville has fared in conference transition seasons in the past.

Terry Rozier. He can play!! Good action in his game. #NikeSkillsAcademy

Apparently the Miami football team has been working out with strobe lights and a DJ.

They're scared of you, K-Dogg...and they should be. Hashtag, mind your business lady.

According to Scout.com's Evan Daniels, class of 2016 center Abdulhaki Ado will visit Louisville on Friday. 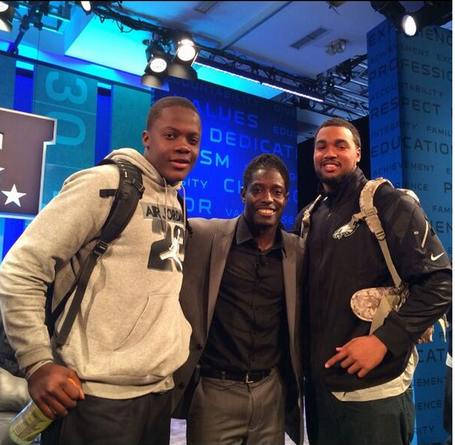