As July 1 and our transition into the ACC near, what better way to familiarize ourselves with our new conference-mates than overview the mascots we will be facing over the foreseeable future? Today’s post will provide the local Chron (don't call it that) readership with a compendium/liturgy/encyclopedic assembly of ACC mascots. Please note that this was post rigorously fact checked using fan boards, SBNation sites and Wikipedia and, therefore, is 1000% true.

Baldwin, the Eagle, is the on-the-field mascot of Boston College. His name is a portmanteau of Bald and Win (get it… he’s a ‘Bald’ Eagle, and Boston College supposedly ‘Wins’ games). Their other mascot, Welles, is a live eagle named for a former student who was killed on 9/11. The live eagle is trained to fly around the stadium before the game, and is quite a bit smarter than Auburns Eagle. In summary: the live Eagle, ‘Murica cool; Baldwin, not quite the Jar-Jar Binks of the ACC, but not great. 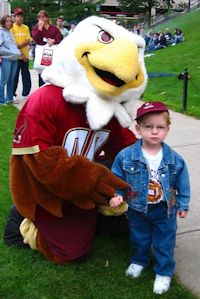 Young BC Fan in Canadian Tuxedo does not approve of Baldwin.

Clempson: The Tiger and the Cub

The Clempson Tiger is one of the fiercest sounding mascots in all of the ACC, largely because of its starring role in The Hangover. While the school is also famous for Howards Rock, the Clempson Tiger is known for creepy mascot photo shoots with small children and attacks on magicians and watching trash can fires. However, there is one incarnation of the Tiger that is a little on the, shall we say - bizarre side: 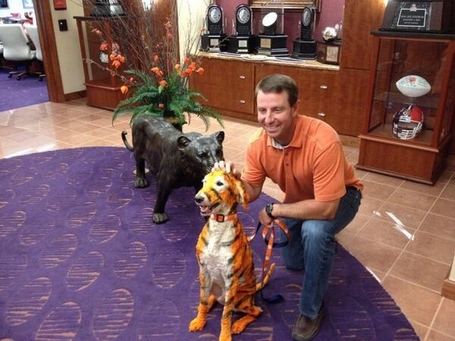 Named for a French Regiment in World War One who former students were impressed by (despite that the French have "reportedly" never won a war), students of the religiously affiliated school initially thought choosing a Devil would be a bad thing. In the time since, the mascot went from creepy, to kid friendly, to having an awkward goatee. From time to time the Blue Devil will also wear something that attempts to be witty or funny on its forehead, but in typical Duke Fashion it is only understood by those few that both attend Duke and scored higher than a 1000 on their ACT or 1,000,000 on their SAT. Don’t pretend like half of you weren’t in the Duke TIP program in middle school, and yes those scores are possible. 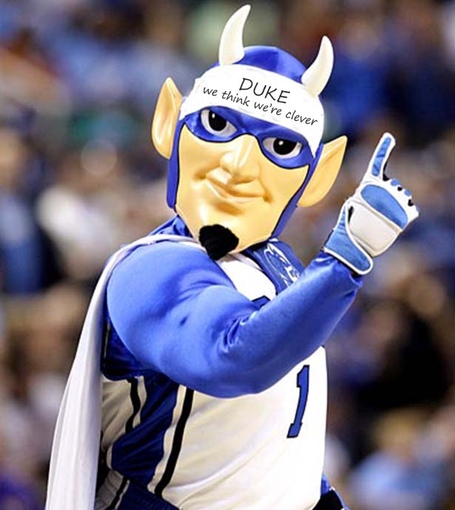 Commentary on sporting events via athletic tape and sharpie: a Duke Tradition. Harrumph.

Florida State is one of the few schools or sports entities allowed to use the official tribe name of Seminoles. Their mascot, Osceola, is known for riding his horse Renegade out into the middle of the field and sticking a flaming spear into the middle. As one of the more notable traditions in college football, it is widely respected and pretty frickin’ cool to watch.

However, for some reason Florida State decided that wasn’t "kid friendly" enough, so they introduced Cimarron - a half human/half horse mascot that has a stripper name and is frequently compared to My Little Pony. It is also worth noting that "it" shares a name with one of the greatest disasters in marketing history: the Cimarron by Cadillac. 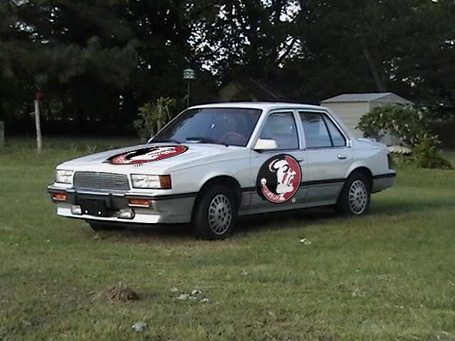 Behold its majesty! The Cimarron by Cadillac.

Despite Florida State trying to take Georgia Tech’s idea of a car and making into a mascot, the Techies have managed to keep a 1930 Ford Model A Sport Coupe running since 1956, despite attempts by the SEC’s finest to vandalize the car, a crash involving the trailer and George O’Leary’s tactic of lighting a dumpster fire in the stadium then heading to Notre Dame where he promptly resigned for lying on his resume. 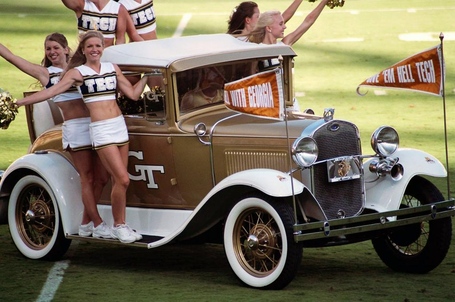 Yelling from Atlanta could be heard as far north as Knoxville, TN due to these Three Wrong Answers.

While our former conference foes of West Virginia famously set couches/dumpsters on fire, the outgoing Maryland celebrates heading to Ann Arbor, Michigan in November by setting their own mascot, the Terrapin, on fire. 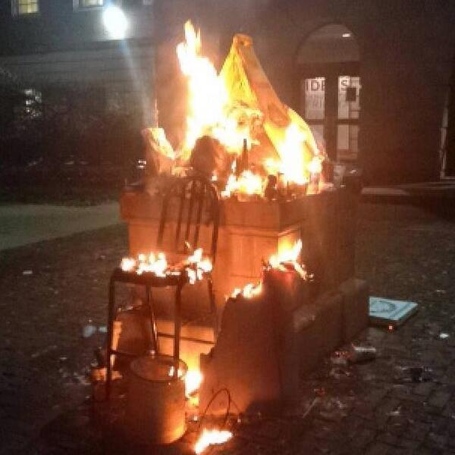 Under Armor is likely to debut "Maryland Flame" football uniforms after their first ever B1G conference win… over Indiana… in 2018.

Famously, Sebastian the Ibis and Louie got into a fairly one sided Twitter War where Sebastian lost… Louisville further hammered it home with our most recent (and upcoming) drubbing of Miami. Common Low Blow Jab: People mock Miami for having very few fans attend their home games. It’s gotten to such a low point that they’re now advertising that you should, in fact, attend even fewer games (but the hat is worth $30, a bargain!).

However, if you should go to a football game Sebastian the Ibis will be there to entertain you! He wants you to remember that he is an Ibis, not a Duck, despite the fact that he looks exactly like Donald Duck (even down to the hat, which means that his costume may in fact be from Disney in Orlando). Sometimes his hijinks are cute and adorable, like taking photos with small children. Other times, they wind you up in the birdcage. 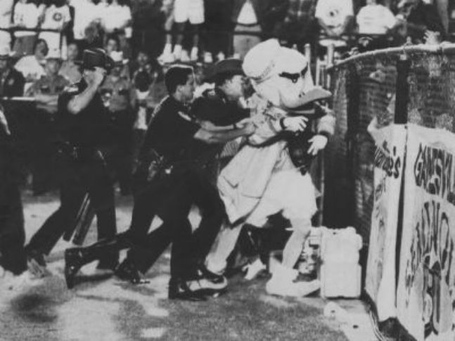 The Cincinnati Bearcat must be taking lessons from Sebastian.

Naming your mascot after a Egyptian Monarch, pretty ballsy. Having a live mascot that is the proud father of triplets, and then writing a serious article about it in your student newspaper? A little strange. Having someone in the athletic department make a Lego based film where you teach the Duke Blue Devil (also Lego) about Michael Jordon… a little on the bizarre/trippy side. 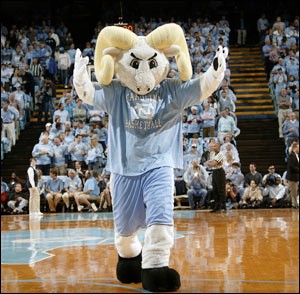 The only thing that’s different from Duke: a lighter shade of blue.

Likely the only school in the Power Five to have married mascots, Mr. and Mrs. Wuf have been NC States mascot since the early 1970’s when a live and robot wolf failed to work. Their marriage from all looks appears to be a happy one, however recently when they bested Louie and his Cardinals in the Belk Bowl, Louie was not pleased and has been anticipating the rematch. Ironically, our connections to NC State run pretty deep: we’re both the second major universities in the state, urban situated in medium sized cities with a fondness for basketball, being the underdog and family ties to the Valvano brothers, not to mention the color Red. 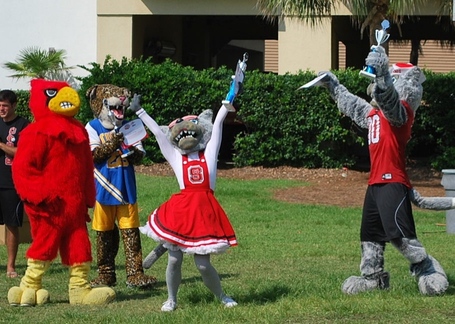 Our old, new, old foe Pittsburgh has perpetually failed to live up to their modest expectations since 2005. Apparently, in an Iron City fueled drunken stupor the university hired Dave Wannstedt after he resigned from the 1-8 Miami Dolphins. A ‘Dynamic’ hire at the time, Pitt got a losing NFL Coach who promptly started losing College games in an empty NFL stadium (which is pretty much the same thing, right?)

Pitts lowered bar of success also applies to its mascot: Roc. Roc recently won "most collegiate mascot" in 2010, which is just like the mythical national championships Pitt claims to have and relies on for its high preseason rankings. In his spare time, Roc doesn’t understand irony: like wearing a Michael Jackson glove, a "Roc of Ages" Shirt and holding up a second place medal on a beach that clearly isn’t Lake Erie. 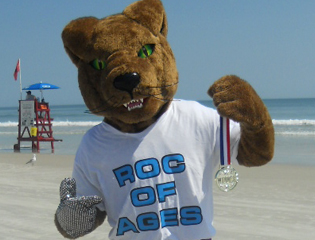 Nothing about this photo makes any sense.

Our second old/new foe on the list, Syracuse utilizes Otto the Orange as their new mascot. Otto, who’s round likeness was likely inspired by the Kool-Aid Man, has only been used since 1990. Due to that short time span, Syracuse felt the need to "tell Otto’s story" in a 4 minute documentary where you find out that Otto is in-fact the third Orange to have existed. Additionally, his evolving face is based off notable Jim Boeheim Facial Expressions. 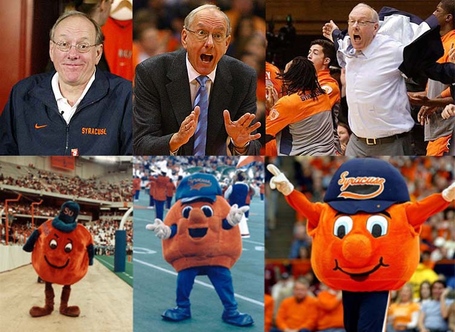 The proof is in the Otto.

I have never understood the idea of having a human mascot, one that looks human, and a digital animated one based off the one that is supposed to look human. Wouldn't it just be far easier to have one, not three? Do we really have to please the kids? Or are you just trying to have a reason, some reason, for fans to come to games?

Well, fans: You’re in luck! Cav Man is famous for falling off a horse, "demeaning Native Americans" through football hype films and having students make videos portraying CavMan as a Pokemon Trainer?

[Note: new addition, because I accidentally forgot them…]

The HokieBird is a turkey, and that’s not a joke. While Virginia Tech Turkeys were almost the national symbol of the United States, a la Ben Franklin, they lost out to the Bald Eagle. As revenge, Virginia Tech has taken a 15-7 win lead over ACC Rival Boston College in Football. As additional payback for the famous snub, Virginia Tech spares no expense for their Turkeys, as this story shows:

"The new HokieBird debuted in style on Sept. 12, 1987, during Tech's football season opener against Clemson. During halftime, a white limousine pulled into the end zone, escorted by the Hi-Techs and two of Morse's interns dressed as Secret Service agents. "A lot of people thought it was a special guest arriving," she says. "Some thought it was the governor." Instead, it was today's HokieBird, who stepped out of the limo and into glory.

As Friends of a Feather, we get it, but prefer Papa John and a Gold Camaro and lots of free Pizza. When the Hokie isn't being chauffeured around it often feebly tries to establish a pecking order above their opponents mascots. Video-graphic proof of one such lost battle exists - and sadly it was to the Stanford Tree. 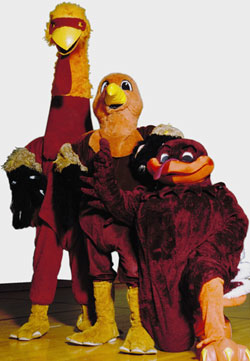 Seriously, you lost to a Tree? How do you lose to a Tree? If that's not "go acc" I don't know what is.

Wake Forest’s Demon Deacon is the classiest of Mascots – wearing a dapper tailcoat, hat and riding a motorcycle into the stadium on game days. With that said, the Demon Deacon hasn't been the most intelligent mascot. On one occasion, Ras Chavman, the man who played the mascot, found out that hats don’t qualify as helmets and head banged a Gatorade Container to put himself into a coma. This is not surprising as Wake Forest football has been in a Coma since a 2006 drubbing at the hands of, you guessed it, Louisville. 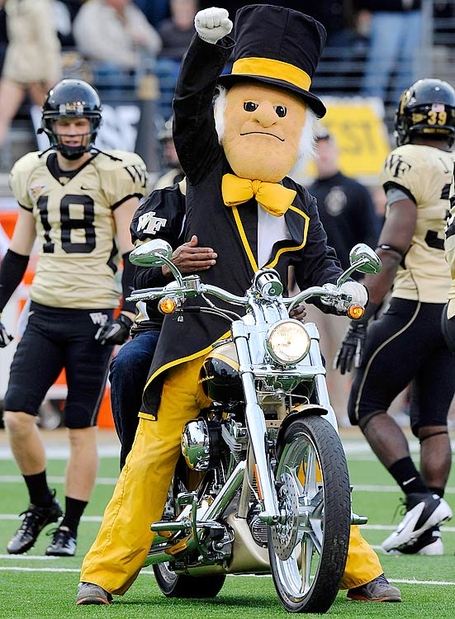