Eric Bivins making the most of the summer days at Lake Tahoe.

The New York Post is currently in the middle of a three-part series chronicling(TM) Russ Smith's road to the NBA Draft. You can read part 1 here and part 2 here.

Congratulations to Jeff Gardner, who has been named a Senior CLASS Award First Team All-American.

1. ACC Tournament going back to the future: At the ACC spring meetings, the league announced that its tournament would move to a Tuesday-to-Saturday format beginning in 2015. It will be the first time since 1981 the tournament's final game will be held on Saturday rather than Sunday afternoon, but John Swofford was quick to note that the first 28 ACC tournaments concluded on Saturday. The league also revealed a new logo and plans to experiment with a 30-second shot clock during exhibition games to pick up the pace of play.

2. Hello Louisville, goodbye Maryland: Unlike the expansion to 15 teams, the addition of Louisville comes out of necessity after Maryland's departure for the Big Ten. Maryland, a charter member of the league, is the ACC's first departure since South Carolina's exit in 1971. There is some sadness in ending a long-running relationship, but those mushy feelings have been squashed by competing multi-million dollar lawsuits. Louisville does not just bring another Hall of Fame coach to the mix, but a .759 winning percentage over the last decade with three final four appearances and a national title. In terms of recent success, the ACC has just upgraded its operating system.

The story of Isaiah Austin's career being brought to an end just four days before the NBA Draft is unbelievably cruel, but there might not be a player in the country more capable of shouldering the pain than Austin.

An ACC website lists 10 reasons whey they're excited about the addition of Louisville.

I've said this before the basketball coaching talent will be unparalled in the ACC. Rick Pitino, Jim Boeheim, Roy Williams and Mike Krzyzewski are you kidding me? Pitino is a legend matching wits other legends, matching wits rising stars like Tony Bennett, and other established successful coaches.

As I pointed out, I like Louisville's southern flavor, but I also like their connection to the more northern ACC members Pittsburgh, Syracuse, and Notre Dame because of their years in the Big East. I've seen Louisville play football and basketball games against Syracuse and Pittsburgh. I've seen basketball games against Notre Dame. There's at least some sense of continuity rather than just a pure partnership with no historical connection.

Some ACC athletic departments, have simply turned it up a notch the last few years. Florida State, Duke, and Virginia are having across the board success. We've discussed some of Louisville's successful athletic programs football, basketball, and baseball but they've also had success at women's basketball, softball, men's soccer  among other. Jurich is a wizard when it's come raisin money for Louisville.  There were times the last few years some ACC athletic departments stagnated, or made laughable financial decisions. Louisville's athletic programs will be good and their finances won't be mis-managed. Tom Jurich will see to it.

Terry Rozier is one of 10 college point guards who have been invited to participate in Kyrie Irving's Nike Elite Point Guard Camp this week in New Jersey.

Let the record show that DMX is down to following 51 people on Twitter, and I'M STILL AMONG THAT GROUP.

When X finally has a "followers only" party, it's going to be the greatest day of my life. I'll post pictures.

If you haven't yet read Time's oral history of the Mighty Ducks trilogy, I'm not sure what you're waiting for.

Mick Cronin is going to be at Cincinnati for at least seven more seasons.

NFL.com says Teddy Bridgewater is one of the six biggest mini-camp winners.

Teddy Bridgewater: No quarterback prospect took more slings and arrows during the buildup to the draft. No rookie quarterback quietly impressed more during offseason practices. While it's always smart to be wary of minicamp hype, the Vikings are very pleased with what they've seen out of Bridgewater thus far. He appears ahead of other rookies mentally, and offensive coordinator Norv Turner has raved about his deep ball. Bridgewater landed in an ideal situation for his development. It wouldn't be a shock if Bridgewater was the only rookie quarterback starting in Week 1.

Charlie Strong hasn't been recruiting the state of Texas as well as Texas A&M, and the natives are already growing restless.

The 6-10 big man had a solid freshman season (3.6 points, 3.6 rebounds, 1.4 blocks), but if the Cardinals want to compete for a conference title in their first year in the ACC, they're going to need more out of Mathiang. One of the more underrated reasons for Louisville's 31-win campaign last season was due to the work that Stephan Van Treese (5.7 rebounds) did on the backboards and Rick Pitino's squad will need similar mileage out of Mathiang on the glass. The 6-9 Van Treese really picked up the rebounding slack for Louisville after Chane Behanan's dismissal, and had seven or more rebounds in six of the Cardinals' final seven games. Louisville needs Mathiang to reach the same type of level as a sophomore if it's to get where it hopes to go in 2014-15.

Time Warner sucks. I will be throwing a ticker-tape parade after my U-verse installation tomorrow afternoon. All are invited.

In a "that's really cool/that kind of sucks" moment, my former roommate Kevin was the dreaded "face of America" shot immediately following the final whistle of yesterday's match. 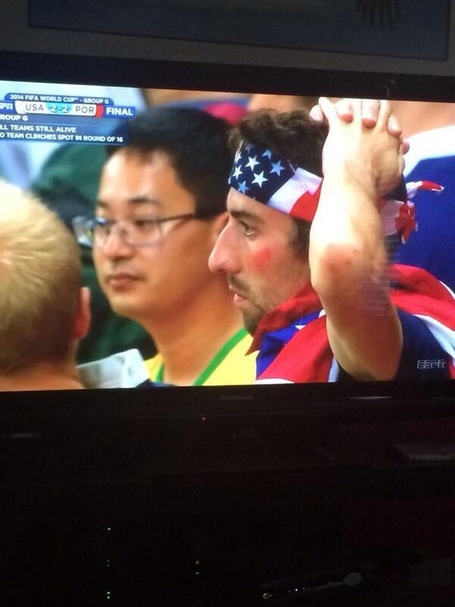 He's been writing about his experience in Brazil for Busch League Sports, and is doing a really great job.

Peyton Siva spent his Monday in Glasgow hanging with the Boys and Girls Club.

Lost Lettermen catches up with Samaki Walker, who is now a youth basketball coach in Southern California.

And finally, Mark Ennis and I are back on ESPN 680 tonight from 6-7:30. Topics will include sports and the connection between Thomas Paine and Waldo Geraldo Faldo from "Family Matters."