Our thoughts and prayers are with Larry Thompson, who is fighting lung cancer but still pumped about the Cards knocking off Kentucky and advancing to the super regionals.

Game dates and times for this weekend's super regional are expected to be announced tonight around 11, or early tomorrow morning depending on what time the final regional games wrap up. Game one between Louisville and Kennesaw State will either be on Friday or Saturday.

Phil Steele's Louisville preview is up, and he has the Cards just outside the top 25 at No. 26.

Baseball America's Aaron Fitt says that Louisville's big win on Sunday reinforces the Cards' status as the dominant power in the Bluegrass State.

The Louisville Regional championship game between the host Cardinals and in-state rival Kentucky wasn't exactly a work of art, but it was surprisingly well played considering the two teams had to wait out a four-hour rain delay and play through a steady rain for much of the night. And the first-ever NCAA tournament game between the two Bluegrass State rivals gave a rowdy, soggy crowd all the intensity, passion and theater it could have wanted.

Two home-plate collisions led to two benches-clearing incidents, ramping up emotions in a game that was destined to be emotional. But Louisville has superb leadership from its fine coaching staff and its core of Omaha-tested upperclassmen, and the Cardinals never let their focus waver on Sunday night. Louisville has proven it knows how to win in the postseason; Kentucky is still trying to get over the hump past the regional round for the first time in program history.

The Cardinals reinforced their status as the dominant power in the Bluegrass State with a 4-1 win against UK, propelling Louisville to its second straight super regional, and its fourth since Dan McDonnell took over as head coach in 2007. It wasn't just another postseason win-beating Kentucky undoubtedly enhanced the atmosphere and surely gave the Cardinals a little extra satisfaction. But at the same time, this group of Cardinals has its eye on the bigger prize.

Your updated NCAA Baseball Tournament bracket looks like this. If Louisville does advance to the College World Series, the Cards will likely face a regional rival in game one -- either Vanderbilt or Indiana. The Commodores have already advanced to the supers, while the Hoosiers need to defeat Stanford tonight.

Louisville at Notre Dame is the No. 20 most expensive college football ticket for 2014.

The gang's all getting back together.

Fans of the New England Revolution have started a #ShaveFarrell campaign in an attempt to get former Cardinal Andrew Farrell to shave his infamous beard after he nets his first MLS goal.

You are a stud. You give 110% every game and everyone knows it... except Jurgen Klinsmann who is apparently blind to any and all talent in New England. This defense has been on lock down since you came and a huge chunk of that can be attributed to you.

But let's be honest dude; that beard's gotta go. You gotta score that first career goal.  And when you do, you better come right over to The Rebellion section after the game and get that thing shaved right off.

We are waiting. Your beard's days are numbered. We are bringing the clippers to every match. You got this and we're all behind ya.

Louisville is once again being mentioned as a potential city for NBA expansion.

Brian Brohm and Mario Urrutia are back together as members of the CFL's Winnipeg Blue Bombers, and both are listed among the team's players to watch.

84 Mario Urrutia*, WR: A huge target at 6-6, this former Cincinnati Bengals draft pick (7th round, 2008) has bounced around the NFL and is now a co-owner of the Kentucky Xtreme indoor football franchise.

12 Brian Brohm: Spent all of last year on the Hamilton Tiger-Cats injured list. A second-round pick of the Green Bay Packers in 2008 who put up huge numbers at the University of Louisville (second all-time in passing).

Scary stat via the C-J's Jeff Greer on Twitter: In the last 40 years, five teams, including this year's Kennesaw State squad, have won a regional in their NCAA Tournament debut. The first four of those teams each advanced to the College World Series.

Greer also has seven questions for the Louisville football program as it heads into the summer.

Ticket information for this weekend: 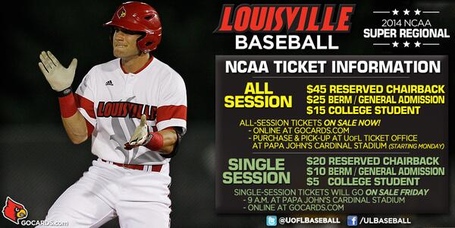 The Jimmy V Classic double-header at Madison Square Garden on Dec. 9 will now feature Villanova vs. Illinois as the other game besides Louisville/Indiana, instead of Villanova vs. Maryland. Safe to say the Illini fans in attendance will be pulling for the Cards.

Russ Smith and Bryce Cotton both worked out for the Celtics today because of course they did.

Arizona's Nick Johnson and Louisville's Russ Smith headlined a group that was thin on first-round talent, but loaded with players who have local ties. None of the players in attendance is expected to go close to where the Celtics are scheduled to pick at Nos. 6 and 17.

Still, the workout might have given a clue as to what type of player the Celtics could look to add once the draft is complete, as nine of the 12 players were scoring-minded point guards.

Here is a brief look at each player at Monday's workout.

Bryce Cotton, Providence (PG, 6-foot-1, 165 pounds) - New England hoops junkies know Cotton well for his exploits with the Friars. He averaged 21.8 points per game as a senior and topped 25 points or more in 11 games. He drastically improved his ability to shoot and finish off the dribble during his time in Providence, and though he is still a score-first guard, he did up his assists per game to 5.9 from 2.9 this season.

Russ Smith, Louisville (SG, 6-1, 160) - That position is not a misprint. Despite being tiny - shorter than a couple of the point guards working out Tuesday and 15 pounds lighter than Williams - Smith is an off-guard at heart. It will be imperative for him to develop some playmaking skills and to bulk up substantially, otherwise he will be eaten alive by pro guards.

Five-star 2015 power forward Derrick Jones is also planning on making a trip to U of L.

Louisville did offer Jones about three weeks ago and Myers called them a "good fit."

"In the near future we would like to go and see Louisville," Myers said. "It's a place that he wants to go see, outside the norm."

"They like him," Myers said. "They just think he fits their style, looking for an athletic guy that can make plays. A good-character kid, a great kid."

ESPN has Richard Pitino ranked as the 49th-best coach in college basketball.

The next step for Russ Smith on his professional journey is adding bulk.

And finally, confidence has never been an issue for Calvin Pryor, who told reporters in New York today that he's the complete package.