An emotional (and lengthy) evening at Jim Patterson Stadium ended with Louisville defeating Kentucky 4-1 and moving on to the super regionals for the fourth time in eight seasons.

The third time was the charm for freshman lefty Josh Rogers, who allowed just four hits and one run over six innings. Rogers had started and taken the loss in both of U of L's regular season meetings with the Cats.

Louisville's win guarantees that there will be more Cardinal baseball at Jim Patterson Stadium this season, as U of L will host either Alabama or Kennessaw State in next weekend's best-of-three series.

--There haven't been many Cardinal baseball moments cooler than this one:

Cole Sturgeon is a bad man and that Kyle Gibson ball spike might be the U of L athletics celebration of the year. It felt like the game was won after this happened.

--We talked earlier in the week about how this team's strong staff made it better suited for the super regionals than a four-team weekend tournament, but when your pitchers only surrender four runs in 27 innings, you're going to be set up pretty well for any type of tournament. A gigantic tip of the cap to the Cardinal hurlers for their performance this weekend.

--Corey Ray is an absolute star in the making. Sturgeon was the regional's MVP, and deservedly so, but Ray was a game-changer on all three days. 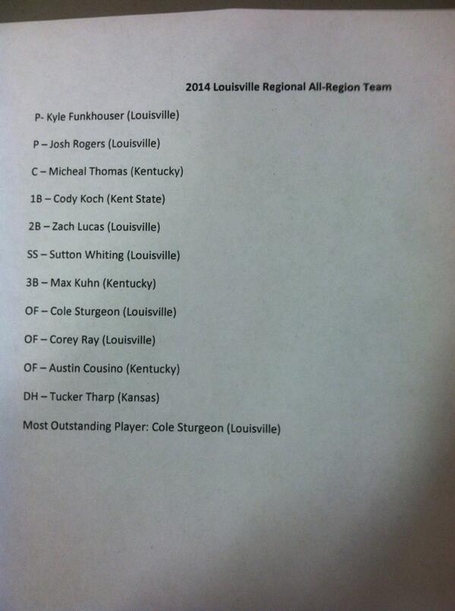 --This weekend, and this game in particular, certainly did nothing to convert the casual fans who are firmly in the "baseball is slow and boring" camp. Lots of stoppages in play, lots of "turn the page" moments. Such is life.

--Another big night for the CCBM.

--Despite two games that started nearly four hours after they were supposed to and numerous in-game weather delays, the fans were fantastic all weekend, and a larger number of the players and coaches have already voiced their appreciation. The atmosphere should be terrific again this weekend.

--Really cool moment in the fifth when McDonnell went to the mound and cameras clearly picked up Josh Rogers saying "this is my guy, don't take me out." Awesome to see that from a freshman, and even more awesome to see him live up to his words moments later.

--Can't let this post go any further without recognizing the true star of the evening, the head groundskeeper. 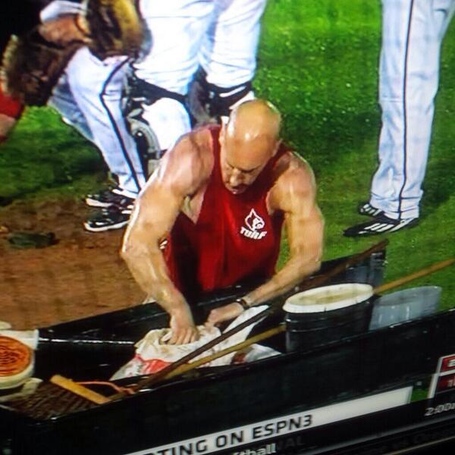 They say that's not actually diamond dry, it's powder from all the bones he's crushed with his bare hands.

Also, I will own a Cardinal "Turf" tank top before the end of this summer, and I will wear it religiously.

--McDonnell sprinted to home plate and had a very animated conversation with the home plate umpire after Rogers hit Thomas Bernal the inning after the benches cleared the first time, and I'm pretty sure it was an act to make sure that tempers didn't flare any further. Dude knows what he's doing.

--For all the success stories at U of L over the past decade, there's still nothing more impressive than what Cardinal baseball has done since McDonnell's arrival. I mean eight years ago, Louisville had been to one NCAA Tournament and couldn't lay claim to a single victory in the big dance. No the program is two wins away from their third trip to the College World Series. It's just remarkable.

Can't wait for more fun at The Patt this weekend.