That's Addison Marie Smith fighting valiantly to throw up her first L. She'll get there in a matter of days.

GoCards.com wants you to get to know starting quarterback Will Gardner a little bit better.

The Sporting News' Mike DeCourcy has Montrezl Harrell as the No. 1 power forward in college basketball for the 2014-15 season.

There was Montrezl Harrell before Chane Behanan was booted, and there was the guy who picked up the Cardinals' frontcourt and carried the team to dual American championships afterward. Harrell improved his scoring average by more than four points a game once the power forward position became his, including an overpowering 21-point effort at Cincinnati that essentially kept the Cards alive in the league race.

Harrell's decision to return to college basketball was among the more surprising of any potential draft candidate, but he can continue to grow as a prospect by becoming a consistent jumpshooting threat and improved technical defender.

Three-star linebacker Nick Dawson, whom Louisville is firmly in the mix for, will announce his college decision tonight at  6 p.m.

Just when I had finally figured out which Willie Williams was which...

U of L soccer and head coach Ken Lolla will host the fourth annual "Kickin' it with JT and Friends" free soccer clinic for children and adults with special needs on Saturday, July 19 at Mockingbird Valley Sports Complex.

Teddy Bridgewater's name has been linked to gloves more than anyone since Michael Jackson.

I walked into the gym on Monday night - a session for 6-to-10 year olds - and it was just as predictably chaotic as you'd expect a camp for 6-to-10-year-olds to be. There was a lot of running and screaming and smiling, and there weren't many made baskets. Ten-year-old Sam Gilles of Henryville, Ind., didn't really like how chaotic it was. Specifically, he didn't understand why his teammates wouldn't pass him the ball.

So when his scrimmage ended, he sat down by himself, leaned against the padded gym wall and began to cry. I didn't notice at first, but I noticed Russ notice. He appeared to be the only one in a gym full of kids and counselors and parents to notice. Russ walked off the court and sat on the floor with Sam.

They spoke for a few minutes, and slowly Sam's tears dried up and his frown went away. He nodded his head a few times. Finally, Russ slapped Sam five, stood up and got back to coaching the basketball camp.

There were no television cameras around, and at this point Russ didn't know I was in the gym watching this moment, either. Afterward, I asked Sam what Russ had said that had lifted his spirits.

"He said you should never be mad if your teammates don't pass you the ball," Sam said, sniffling away a leftover tear. "He said there are a lot of other ways you can get the ball, like stealing it or rebounding it. He made me feel better."

I spent a solid chunk of my Monday at the camp with my nephew, "Bendiculous," and it's safe to say he enjoyed himself. 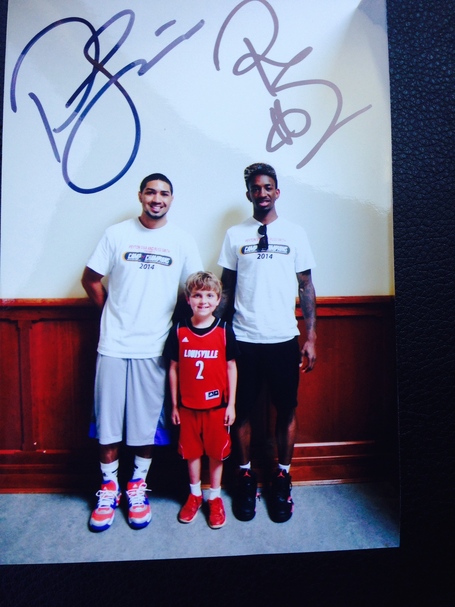 More dreams realized this week thanks to the dynamic duo:

Brian Brohm is set to be the most popular man in Manitoba.

The official Buffalo Bills website has a great story on Preston Brown and his close relationship with his father.

I always cheered for the "nice guys" growing up (or at least the ones who seemed nice from afar), and none were nicer than Tony Gwynn. Keith Olbermann's tribute to Gwynn from Tuesday night was about as good as it gets.

Louisville is one of the schools in the mix for 5-star shooting guard Malik Monk.

Teddy Bridgewater is going to get a shot to be the Vikings' starting quarterback in week one.

Cassel and Bridgewater -- whom the Vikings took with the 32nd pick in the draft last month -- got more snaps than Ponder during the Vikings' organized team activities that were open to the media, and both quarterbacks looked sharper than Ponder, who lost the starting job to Cassel at the end of last season and is fighting for playing time before he becomes a free agent in March. But the quarterback position will apparently be an open question long enough that any of the three can win or lose the job.

Zimmer said he will want to make a decision sometime before the season so the Vikings can get their starter ready with the first-team offense. But, he said, "We've got 20 some practices before the first game, 20 walk-throughs or something. We've got time.

"Everybody wants to rush into things, but it's more important to me to make the right decision, and when you do, then we'll go with it and hope it's the right call."

Louisville has offered a scholarship to class of 2016 point guard Lamonte' Turner.

The resemblance is pretty uncanny... 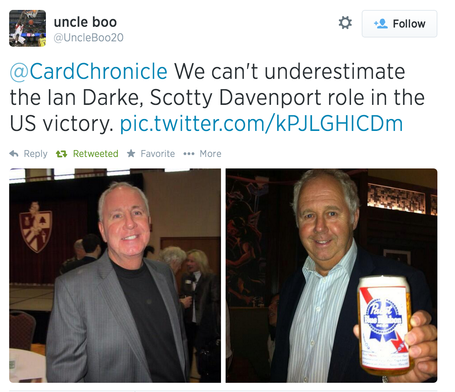 The Dynamic D Duo is going to carry this nation to a World Cup title. Mark it down. Period. Chalk it up. Remember who said it first.

You all might remember the story from a few months back of Hadley Mercer, the 1-year-old local girl who was diagnosed with leukemia. This Saturday, Louisville Geek is throwing a block party/fundraiser in St. Matthews to help support her in her fight against the disease.

Tickets to the event are $50, and that includes access to a silent auction, two drinks and one appetizer at any participating venue (Molly Malone's, Tin Roof, Drakes, and Mellow Mushroom). It also includes the cover charge for Slow Charleston and Danny Flanigan and the Rain Chorus, who will be on stage in the BBC parking lot from 4-8 p.m.

You can learn more about the event and register online at http://lougeek.com/blockparty. You can also purchase tickets at the door on Saturday.

As of June 17, FSU is favored by 17 points in the game. That may seem like a lot for people who have seen Louisville put up excellent seasons in 2012-13, but consider that FSU is the most loaded team in CFB, that Louisville lost its coach to Texas, the best QB in its history to the NFL, and a bunch of defensive lineman, and you can begin to understand the spread.

Also, consider that Louisville is stepping up in competition, from the AAC to the ACC. We've seen some teams struggle mightily when doing so, like Miami, TCU, West Virginia, Colorado and Utah.

Still, this is a Petrino offense with a very nice OL and WR corps. Petrino often works magic with quarterbacks, and I'd expect nothing less from Louisville.

U of L's plan to demolish the old silos is moving forward.

I think we've almost started to take the masks a little bit for granted. We should all be properly enthralled and creeped out by this picture.

The highlight of Quentin Snider's recent Q&A with the C-J has to be his take on Anas Mahmoud.

Chinanu Onuaku and Anas Osama Mahmoud are the other freshmen there now. What do you think about Anas, the 7-footer from Egypt?

He can shoot from the outside. He reminds me a little of Dirk Nowitzki, but he's real frail, real skinny right now. He's going to get a lot better. ... I thought he would talk a different language, but he pretty much just talks regular. It surprised me that he can talk English, too, but he said that's his second language up in Egypt.

Former U of L QB commit Ross Trail is now headed to Cincinnati.

Jeff Greer explains why the Louisville-Kentucky basketball game will be on ESPN2 and not CBS or ESPN.

Whenever I think about the game being on ESPN2, I think about the 2000-01 game that Reece Gaines almost single-handedly won, but which ended when Ellis Myles threw the ball out-of-bounds on an inbounds play near the end of the game. Those times were not as grand as these.

ESPN examines what will be Louisville's toughest stretch during the 2014 football season.

Why: While Bobby Petrino inherits a program that has won 23 games over the last two seasons, the expectation is Louisville will undergo growing pains as Petrino rebuilds the Cardinals in his image for the second time. However, if Louisville does make a surprise run and is in the race for the ACC title, the Cards will need to win at least two games during that October stretch.

Clemson has recruited extremely well over the last few cycles, and its defense -- specifically the line -- could be the ACC's best. The offense is suspect going into the season as Tajh Boydand Sammy Watkins embark on their NFL careers. Running back Roderick McDowell, who totaled more than 1,000 yards last season, has also left Clemson for the pro ranks. If new starter Cole Stoudt struggles and the high-octane offense that lit up scoreboards the last few seasons takes a giant leap backward, the Tigers could be susceptible to an upset from the visiting Cardinals. Clemson conceivably could have three losses heading into this game, and if that is the case, the Cardinals could take advantage.

NC State, coming off a winless ACC campaign in Dave Doeren's first season, do not appear to be much of a threat. It is a divisional game, though, and the Cardinals cannot look ahead to Florida State, which they host for a prime time Thursday night game.

The Seminoles are in position to run the table again in 2014 en route to consecutive national championships, and few are looking at this game as one that could trip up Florida State. The Cardinals will have 11 days to prepare for the game (as do the Seminoles) and predicting Thursday night games is always a crapshoot, especially with a home underdog. Petrino, personal opinions aside, is one of the better coaches in the country, and it would be foolish to count him out four months before the game is played.

I am just so excited.

Throwing the deep ball was supposed to be Teddy Bridgewater's weakness, but Norv Turner says Teddy has been "outstanding" in that department so far.

And finally, posts have been, and will continue to be, a bit sporadic this week as CC Headquarters is in the process of moving. It's not an enjoyable experience. Don't let anyone tell you any differently.