CWS fever has spread all the way to The Parthenon.

The big news of the day from Omaha is that Vanderbilt will send Carson Fulmer, and not first round draft pick Tyler Beede, to the hill against Louisville on Saturday night.

Beede has struggled with consistency this season, and didn't make it out of the third inning against the Cards in last year's super regional. Fulmer is 6-1 this season with a 1.78 ERA.

College Baseball Central says Louisville has unfinished business in Omaha, and predicts that the Cards will advance to the championship series.

Lorenzo Mauldin is now a red-dreadhead. 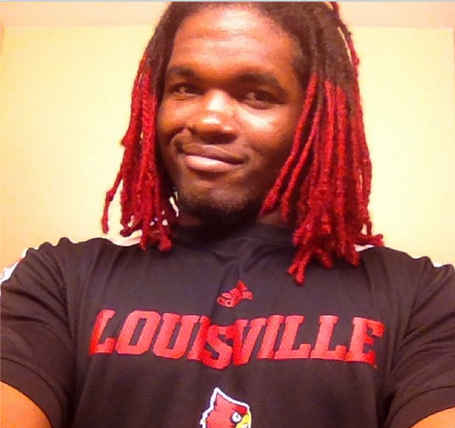 Three-star cornerback Kareem Ali wound up committing to Maryland over Louisville and Pittsburgh on Thursday.

If you haven't ready Bill Connelly's Louisville football preview yet, change that immediately.

It sounds a lot like Petrino's 2009 Arkansas team, one that featured Ryan Mallett throwing to exciting receivers and an athletic defense that was a little too young to be a top-30 unit. That team went 8-5, then improved as Mallett and the offense gelled.

It's a shaky comparison, yes. This Louisville offense has a more experienced offense, and while 2009 Arkansas' defense was done in by its secondary, Louisville's is more likely to be done in by a young defensive front. But what Petrino is implementing in Louisville should take relatively quickly. Last year, he inherited a WKU offense that was running Stanford power; by comparison, the receivers he finds at Papa John's Stadium will be very much to his liking.

Louisville will score, and the prospects that Charlie Strong left behind for defensive coordinator Todd Grantham should be at least reasonably effective, despite both youth up front and the move from a 4-3 to a 3-4. This isn't a team likely to continue the Cardinals' recent pace of wins - 11-2 in 2012, 12-1 in 2013 - but Louisville could easily be the third-best team in its new league. Not a bad place to start.

Teddy doesn't need a ball (or non-cargo pants) to golf.

Mel Kiper has DeVante Parker at No. 3 in his rankings of the top wide receivers for the 2015 NFL Draft.

He was Teddy Bridgewater's leading receiver in terms of yardage last season, and Parker really stands out for his ability to make the contested catch. He's got good size at 6-3 and 200-plus pounds, but he doesn't just outleap people, as he also has a good sense of how to maneuver and adjust to the ball in the air. He's not a burner, but could figure into the first two rounds next year if he keeps his production up.

ESPN's Matt Fortuna breaks down the coaches most likely to be named ACC Coach of the Year, a list which does not include Bobby Petrino.

Fansided offers up its CWS team profile of Louisville.

Star News Online pegs Louisville as the third best team in the ACC for 2014-15.

■ 1. North Carolina: Duke may ultimately end up being the most talented team in the league, but for starters the Tar Heels have a larger and better returning core in ACC Player of the Year candidate Marcus Paige, athletic wing J.P. Tokoto and a stable of improving big men, to go along with a loaded freshman class of their own.

■ 2. Duke: The Blue Devils will go as far as newcomers Jahlil Okafor and Tyus Jones will take them, which projects to be very far. But as with all untested freshman - and coach Mike Krzyzewski will be relying heavily on four of them next season - you just never know how they'll handle the transition to the college game until they actually get onto the court and start playing.

Marquette has added Travis Diener to its coaching staff...I think now is the time to resume this series.

The C-J's Jeff Greer has a good story on Anthony Kidston, who will start Louisville's second game at the College World Series after an injury forced him to watch from the stands a year ago.

Teddy Bridgewater says he believes Charlie Strong will have great success at Texas.

Chicken destroying the competition in Houston.

SI says that Virginia is the team to beat at the College World Series.

Louisville might have some extra fans in Omaha over the next week and-a-half, as Cardinal first baseman Grant Kay is the only native of the city who will be competing in the event.

Put it on your calendar: 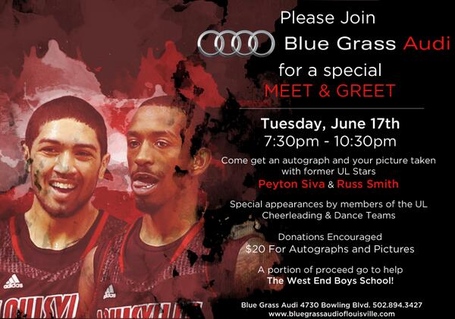 Matt Willinger of CardinalSports.com says that, as always, Vandy will be a tough test for the Cards.

Class of 2015 point guard Bryant Crawford left his visit to Louisville with a scholarship offer earlier this week.

Bryant Crawford, one of the top point guards in the Class of 2015, visited Louisville this week and is definitely considering the Cardinals as a future destination after picking up a scholarship offer.

"It was nice, I enjoyed it,"  the 6-foot-2 point guard from Washington, D.C., Gonzaga and Team Takeover told SNY.tv by phone.

Crawford met with head man Rick Pitino and his staff.

"[They said] if I came there based on whatever happened next year or who leaves next year, I could possibly play as a freshman," Crawford said. "I should be prepared to play if I did come to Louisville."

Several U of L recruits made the cut for USA Basketball's U-18 team.

Jazel (@bugsick25): What are the chances for second-year players like Kentavious Caldwell-Pope, Peyton Siva and Tony Mitchell to get some playing time or does Stan Van Gundy prefer to play veterans?

Langlois: When Van Gundy took the 2008-09 Orlando Magic to the NBA Finals, he leaned pretty heavily on rookie shooting guard Courtney Lee. Lee wound up starting for him and performed really well for Van Gundy. His career really never took that next step after one season under Van Gundy. Coaches appreciate consistency and veterans usually have an easier time maintaining consistency than young players. But a well-coached team with a disciplined system in place also draws out consistency in players and that's what I expect to happen under Van Gundy. Caldwell-Pope, I have to think, will go into the season with a real shot at a significant role. Whether that's starting or coming off the bench will depend, in large measure, on what moves Van Gundy makes in free agency or trade. But if Van Gundy's coaching can help KCP get to a place where he's a more consistent producer, the Pistons could have something pretty special there. You never want to make too much of one game, but the rookie's 31-point finale at Oklahoma City - where he was every bit as good on the defensive end - is pretty hard to ignore. The former Pistons coaching staff loved Siva and it was easy to see why - ideal temperament, great teammate. He's worked extremely hard on his shooting and ended the season flashing some impressive perimeter potential. I think Siva will have a shot at forcing his way into the mix, again depending on roster moves. Mitchell's a little harder to project. The raw tools are undeniable. It will be a very big summer for him. I'll be interested to see what he can do in Summer League next month.

Nick Burdi is cool and he can throw baseballs really fast.