Share All sharing options for: The Casual Fan's Catchup Guide To Louisville Baseball

Being a diehard Louisville baseball fan isn't exactly the easiest task in the world. Not only does the sport begin at a time (February) when Cardinal basketball hysteria is at its peak, but the first half of the season takes place during a period of time that few sports fans ever associate with baseball.

This being the case, the average U of L fanatic keeps a casual eye on the Cardinal Nine in February and March, and then really starts to get to know their team once the basketball madness has died down. Another chunk of folks will start to pay attention only when the postseason rolls around. And then, of course, there is another contingent of fans who just don't care for the game of baseball and have a hard time getting into the whole thing at all.

If you fall into one of the latter groups and have been wary about hopping on the Cardinal baseball bandwagon, I'm here to tell you that it's still okay to become a diehard this late in the game. There's plenty of room for you, and you should probably hop on now because there's a pretty large fact floating around right now that's impossible to gloss over casually: this Louisville baseball team is good enough to win a national championship. Love the sport or loathe the sport, the preceding statement should be enough to at least catch your eye, if not your head and heart, for this weekend and beyond.

If the Cardinals are dogpiling again in a week and-a-half, you're going to want to be able to (truthfully) say that you've been there for the Omaha journey. And if you need a little nudge to get that journey started, I'm here to help.

Here are five things you should know about this Louisville baseball team before they begin their quest for a national championship on Saturday.

1. They have the pitching to win the whole thing

The same can be said for pretty much every other team still chasing a national title, as all but one of the eight teams in Omaha have a team ERA of less than 3.00. That just makes it all the more important that the Cards have arguably the best combination of starting and relief pitching in the history of the program.

Headlining the staff is No. 1 starter Kyle Funkhouser (13-2, 1.73 ERA), who has already set a school record for wins this season. The sophomore righty has been lights out in the postseason, shutting down opponents in U of L's opening game of the AAC Tournament, regional tournament and super regional series. He'll take the hill against Vandy on Saturday night.

No. 2 starter Anthony Kidston (9-0, 3.54 ERA), also a sophomore, has been almost as stellar. Kidston is the perfect accent to the powerful Funkhouser, beating opponents by locating his fastball and changing speeds effectively. It's a skill that he's ridden to a perfect 15-0 record during his career at U of L so far. Freshman lefty Josh Rogers (3-3, 3.63 ERA) has emerged as the No. 3 starter since Jared Ruxer's injury in early May, and he has flourished. In his only NCAA Tournament appearance to date, he threw six innings of clutch four-hit baseball in the Cards' regional-clinching win over Kentucky.

The bullpen is highlighted by the highest MLB Draft pick in the history of Cardinal baseball, Nick Burdi. Burdi, whose fastball regularly touches triple digits, enters the CWS with a sparkling 0.51 ERA and a school record 18 saves. He's picked up the save in four of Louisville's five NCAA Tournament wins so far.

The middle of the bullpen is often where the CWS is won or lost, and U of L has the horses to carry it into next week's championship series. Big freshman Jake Sparger (2-1, 3.20 ERA) has tossed a total of 45 innings and could be used as an emergency fourth starter if the situation calls for it. Lefty Kyle McGrath (2-1, 1.38 ERA) has had a tremendous junior season which included a lengthy scoreless inning streak, and Renaissance man Cole Sturgeon (3-0, 1.98 ERA) is always a reliable option coming in from the outfield.

2. They have the perfect mix of youth and experience

There's a common thought that College World Series teams loaded with juniors and seniors don't own as much of an advantage as you'd think, because those players who are graduating or heading to the pros tighten up knowing that this is their only shot on the sport's biggest stage. It makes sense, especially when you consider how much higher college baseball's biggest stage is than every other level of the sport's season.

U of L has a handful of veteran guys who were stars on last season's CWS team (Sturgeon, Sutton Whiting, AAC Player of the Year Jeff Gardner, etc.), but they also have key contributors just young and cocky enough to not tighten up under the bright lights of TD Ameritrade Park.

Freshman Nick Solak was named the MVP of the Louisville super regional after delivering the game-winning hits (a double and a home run, respectively) in both Cardinal victories. In his last 10 starts, he's 19-for-38 from the plate (I'll let you do the math yourself) with 15 RBI. Fellow freshman Corey Ray has also been red hot in recent weeks. Since April 17, he's hitting an almost absurd.431/.525/.628 while emerging as U of L's near-everyday right fielder.

You need the talented veteran leaders (only fellow CWS participant Ole Miss had more players taken in last week's MLB Draft than Louisville), but you also need the guys who are going to take the field with the freedom of thought that they're going to be back here two or three more times before their college career ends. Louisville has a healthy dose of both.

If you fall under the "baseball is boring" umbrella, then be glad you're a Louisville fan, because the Cardinals play about as exciting a brand of baseball as you're going to find at the college level. U of L swings often, gets on base often and steals often.

The Cards head to Omaha ranking second in the nation in stolen bases with 132. Sutton Whiting leads the squad with 37 swipes in 43 attempts, while Omaha native Grant Kay (23), Cole Sturgeon (19) and Colin Lyman (10) are all also in the double digit club.

Of course you have to get on base to swipe bases, and the Cards are again among the best in the country at doing that. U of L hitters have been hit by pitches 106 times this season, easily the most of any of the teams still standing.

4. They're an extremely likable group

Like most of the Cardinal teams we've lived and died with in recent years, this one is extremely easy to root for.

--Zack Burdi has been preparing for the biggest week of his athletic career to date by lighting up 9-year-olds on the basketball court.

--Shane Crain's name is as fun to say as any Cardinal athlete I can remember.

--Josh Rogers was also coining the nickname "Fat Jesus" in reference to Wayne Blackshear all the way back in Feb. of 2012, two years before he was even on U of L's campus.

--I'd also be remiss if I failed to mention that Jeff Gardner is reportedly quite the hit with the ladies. 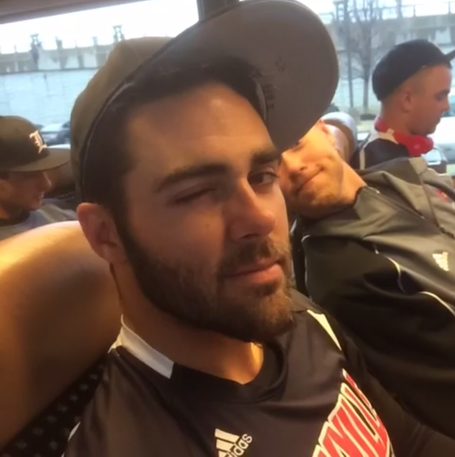 Expect these gents to produce plenty of great off the field stuff over the course of the next week and-a-half.

Eyes up, Little Leaguers. That's how you handle a call to action.

5. They're not satisfied just being here

While the success story of Dan McDonnell's program is undoubtedly one of the most incredible in the history of U of L athletics, Louisville baseball also has a bit of a dirty secret that they'd like to get right before the whispers get any louder. You see, the Cards haven't played particularly well after getting to Omaha.

In 2007, a Cinderella Louisville team took a "nothing to lose" attitude into its first College World Series. They collapsed and blew a late lead against perennial powerhouse Rice in their opener, notched a decisive win over Mississippi State, and then struggled to put the bat on the ball in a 3-1 elimination game loss to North Carolina. Last season's run was even shorter for U of L, which was shutout by Indiana in its opening game and then became the first team eliminated from the event after getting pounded by Oregon State.

While the Cards' performances in Omaha have done nothing to diminish the accomplishments that came beforehand, there's a sense around the city there's something different about this year. McDonnell knows that his team can no longer act like, play like or be one that is satisfied with simply getting to college baseball's biggest stage. Success breeds change, and for Louisville baseball, that change is personified by the final goal on its list.

"Our ultimate objective is to win a national championship." McDonnell said last weekend. "These players expect to compete day in and day out. To achieve greatness, you have to shoot for it. You gotta have high goals, you gotta dream big. I let the kids set the goals and we just try to live up to them."

The Cards want to win a national championship, and regardless of what the oddsmakers say, the sense around the college baseball world is that they have the squad to do it. If you haven't been on the bus since February, it's cool, but you're going to want to go ahead and hop on immediately.