DeVante Parker On The Cover Of Athlon

Share All sharing options for: DeVante Parker On The Cover Of Athlon

If you haven't noticed it by now, a familiar face is on the cover of Athlon's regional college football preview magazine: 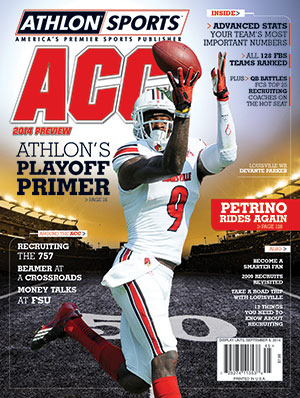 The magazine, which has been on shelves for about a month, also features a great behind-the-scenes story about Louisville's equipment staff and the staggering task it's faced with every time the Cardinals hit the road for a game.

The feature was made available online today and is worth checking out.

And then comes the sweatshirt, and it's always one from Strong's first season at the school. The lettering is outdated from the standard issue sweatshirts the rest of the coaching staff receives, but the head coach is the one who wears exactly what he wants.

"Coaches can be just as superstitious as the players," Kurowski says.

That said, the players don't have much room to be superstitious under Strong's watch. Every week, one team or another in college football wears a specialty uniform, a throwback or some new combination of jerseys and pants.

In this regard, the traditional look of Texas is perfect for Strong. At Louisville, the Cardinals wore all red at home and all white on the road.

Safe to say that will not be the case this season.