Makenzie Simpson recently celebrated her 14th birthday, and was promptly photobombed by the CCBM...a rite of passage for any young Louisville lady.

I have received all of your bachelor party inquiries and they have been passed along to my lawyer.

A nice, quick and informative CWS primer on the Cards from an affiliate in Omaha.

Lauren Brownlow of Fox lists Nick Burdi as one of the five players to watch at the College World Series.

Yes, another pitcher. But the junior righty can touch 100 with his fastball, and he admitted -- nay, declared -- that he was...displeased with where he was taken in the MLB Draft (46th overall to the Minnesota Twins). That kind of fire, combined with Burdi's obvious talent, is intriguing to say the least. He's the only closer on this list, and even though he was displeased with his position, he still ended up being the highest MLB Draft pick in Louisville history. He has 18 saves this season and a 0.51 ERA with a 3-1 record, striking out 62 and walking just 10 in 35.1 innings pitched. So often in a big ballpark like TD Ameritrade, these games come down to having a dominant closer, and Burdi is certainly that.

Vanderbilt pitcher Tyler Beede, whom Louisville will almost certainly face on Saturday, checks in at No. 1.

Vegas has Louisville opening as a +105  underdog against -145 Vanderbilt on Saturday night.

This latest piece of work from Ian Klarer is one of my favorites. 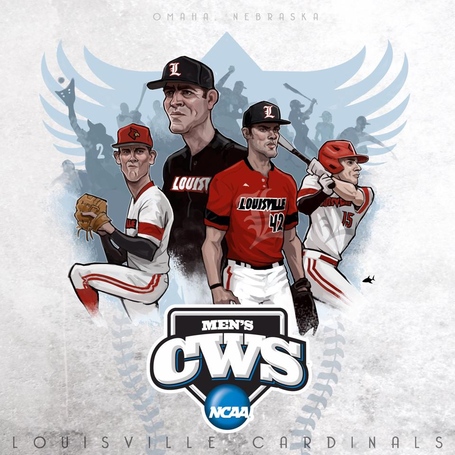 Elite hoop recruits Deng Adel and Bryant Crawford are both expected to be on U of L's campus Wednesday.

247Sports lists Dominique Brown and Michael Dyer as one of the best running back tandems in the country.

Dominique Brown/Michael Dyer, Louisville- Brown led the Cardinals in rushing last season with 825 yards. Dyer struggled with injuries, but showed some signs of the talent that made him one of the top recruits in the country in the 2010 class. This could be a lethal one-two punch to set up Bobby Petrino's passing game during Louisville's first year in the Atlantic Coast Conference. It's also sort of ironic that Dyer is now being coached by Petrino, considering the first-year (back) Cardinals coach lost him to Auburn out of Little Rock when he coached Arkansas.

The announcing team of Karl Ravech, Kyle Peterson and Jessica Mendoza will be on the call for Louisville's CWS opener against Vanderbilt Saturday night.

Syracuse and Georgetown are renewing their hoops rivalry. 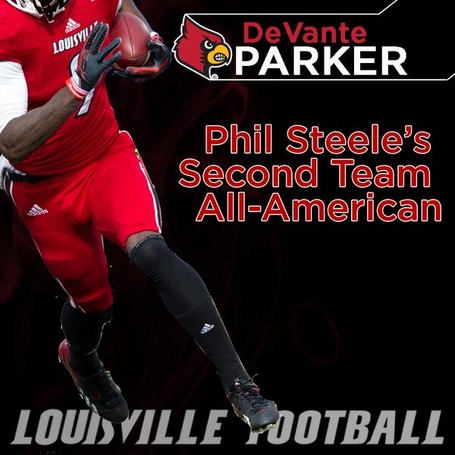 DeVante is also one of four players that ESPN has in a poll for who should be preseason ACC Player of the Year. You can vote for him here.

Teddy Bridgewater told reporters over the weekend that he's a team first guy and is fine with not starting right away.

Three-star cornerback Kareem Ali will be announcing his college decision on Thursday. Ali is down to Louisville, Pittsburgh and Maryland.

Louisville will be the No. 3 team in the country when it arrives in Omaha later this week. Virginia and TCU are the only squads ranked above the Cards.

If someone showed you this and told you it was a joke, would even you hesitate before believing it?

Rendering of New DePaul Basketball is so delusionally optimistic, it gives hope to all cc @CardChronicle @latewhistle pic.twitter.com/epQ4ie2OL1

I've never missed anyone or anything more in my life.

It was another huge day of layoffs at The Courier-Journal, one that included the paper saying goodbye to metro editor Mike Trautmann. Very sad.

This is pretty awesome. 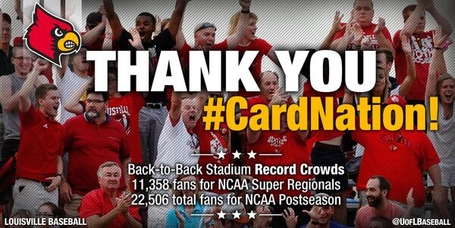 The Philadelphia Eagles have officially signed Marcus Smith to a deal that will pay him around $7.8 million over four years.

"I've been waiting on it for a long time, been wanting to sign my contract just to get everything over with," Smith said in a statement. "It just feels great to be an Eagle and have no worries and go on the field and do what I do best."

Class of 2016 guard Tyus Johnson makes it sound like Kentucky is his dream school, but his relationship with Kenny Johnson has him interested in Louisville as well.

And finally, for those so inclined, here's your printable 2014 CWS bracket.