This young Cards fan has spent a large chunk of the past three months at the ballpark just waiting for this weekend to finally arrive.

NFL.com says that DeVante Parker is the No. 1 "most freakish athlete" in college football for the 2014 season.

Particulars: 6-3, 208, senior
Buzz: He was Teddy Bridgewater's favorite receiver at Louisville, but will have to go without Bridgewater this fall. Parker's high-level athleticism will help him get by. He has been clocked at 4.39 seconds in the 40-yard dash, and his vertical jump has been measured at 36.5 inches and his broad jump at 10-foot-10. He can squat 455 pounds and bench press 335 pounds; he also can do 17 reps in the bench press at 225 pounds. In addition, he has a wing span of 80 inches, so when you factor in his height and his vertical jump, his "catch radius" is exceptionally large, which should make new starting QB Will Gardner smile.

A Louisville/Kent State preview from the opponents' eyes.

The Sporting News does not have Louisville in its preseason top 25.

Russ Smith worked out for the Phoenix Suns on Friday, and Kevin Zimmerman from ValleyoftheSuns.com has a really good read on his draft prospects.

"Louisville runs a lot of high pick-and-rolls," said Suns general manager Ryan McDonough. "They obviously have a legendary former NBA coach in Pitino. They run an NBA-like set. It think their guys have a very good understanding of how to run the pick-and-roll and play NBA basketball. I mentioned, I think Russ would do very well in transition. In the halfcourt, I think he'll have to get a little bit stronger and bulk up to handle the physicality of the NBA game. But he has a lot of things you can't teach and had a lot of success in college."

Both Jeff Hornacek and McDonough raved about Smith's knack for ripping ball handlers who expose the ball. They like how he can speed up the game. But while he thrives in transition, Smith's struggles could come to light in the halfcourt, where he could be bullied at his size. And offensively, he shot 63 percent at the rim, according to Hoop-Math.com - he will have to prove he can continue at a high pace despite his size or develop a floater to shoot more effectively over interior length.

"His role, at least early on in his career, would probably be a scorer coming off the bench, someone you bring into the game and gives you a boost - a spark plug," McDonough said. "If you can do that, I think the size becomes less important if he can prove he can score and run a team. He'll at least need to be able to guard point guards, and I think with his quickness and toughness he can do that." 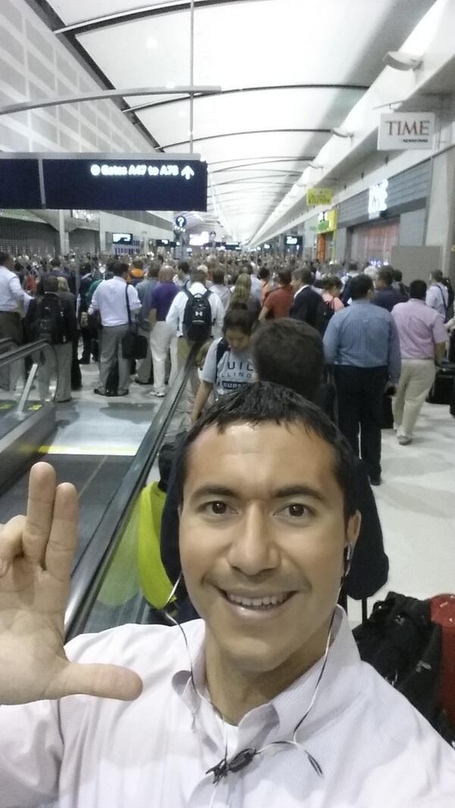 Fandom and patience personified in one picture.

Louisville hoops freshmen Quentin Snider, Anas Mahmoud and Chinanu Onuaku are all expected to enroll at U of L next week, a status Snider confirmed onTwitter.

Via Deadspin, here's the test that ESPN makes potential employees take to showcase their sports aptitude.

Also noteworthy is the fact that U of L is the only D-I program in the country to win at least 10 games in football, 30 in men's basketball and 40 in baseball...and that doesn't even take into account the 30 plus games the women's basketball team won. 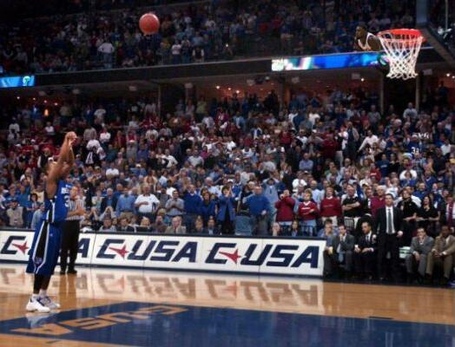 Dry mouth, push it out, I can hear my heart pound, a hero's what I'm not.

According to current Card Henry Famurewa, Powder Springs (Ga) cornerback Ty Woodley might be the next member of the class of 2015 to commit to Louisville.

It appears as though Luke Hancock worked out for the Utah Jazz on Friday. 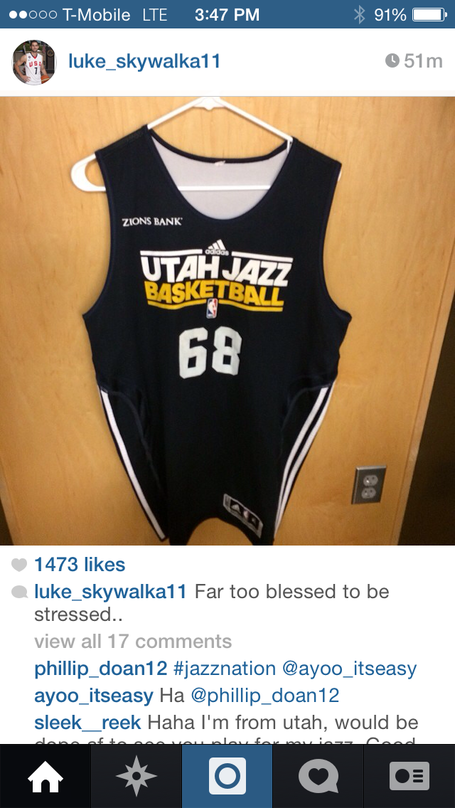 USA Today says Montrezl Harrell is the player in college basketball whose return most improved his team's stock for 2014-15.

1. Montrezl Harrell, Louisville: Perhaps the most shocking decision of any player who bypassed the NBA to return to school, Harrell makes the Cardinals a preseason top 10 team. The loss of Russ Smith will hurt U of L offensively but keeping a talented big man like Harrell is essential for remaining a contender. One reason is Harrell's defensive skillset. But the 6-8 junior forward has a steadily improving offense, averaging 14 points and 8.4 rebounds last season while shooting 60% from the floor.

Minnesota still doing its best to capitalize on this newfound Louisville connection.

.@ChaneBehanan talking with the Twin Cities media after his workout. Played with #Twolves center @GorguiDieng at LOU. pic.twitter.com/qr0Fe4vyc7

ACC reporter David Teel proposes that the conference should exercise a divisional swap between Louisville and Georgia Tech.

"Pitino is a great guy," Briscoe said. "He's a Hall of Fame coach and the things he says, you can believe it because you can see it for yourself. He's not lying and is very laid-back guy."

Louisville has told Briscoe that he'll be able to play immediately as a freshman, which is important to him.

"[Pitino] said that he's never promised a freshman that he'll play right away, but he promised me that I'll play," he said. "He didn't promise a starting position, but he said that I'll get in."

He added: "Playing time matters. Who doesn't want to play right away? I got to be realistic, but I want a coach who can let me play through freshman mistakes."

Aside from Louisville, Briscoe says the schools recruiting him the hardest are Arizona, UConn, Rutgers, Seton Hall, and St. John's.

The Sporting News likes Louisville to finish third in the ACC's Atlantic Division.

Louisville's predicted finish in the ACC: 3rd in Atlantic Division

And finally, a trio of rain delays resulted in the first inning of play between Kentucky and Kansas lasting just over two hours at Jim Patterson Stadium. If you're headed out to the ballpark tonight to watch the Cards begin their trek to Omaha, just know that first pitch is going to be a tad later than 6 p.m.