Brandon Bender Back In The News

Share All sharing options for: Brandon Bender Back In The News

Former CC LCP Brandon Bender has been able to keep his name out of the news for most of the past year, but the old adage about no good thing lasting forever reared its ugly head again on Tuesday.

There have been four players come and go who had three different allegations of violence against women, including one player who pled guilty to misdemeanor assault of his girlfriend. And there are two incoming recruits with ties to Brandon Bender, who was involved in multiple NCAA violations committed by Central Florida a few years ago, which landed the Knights on probation and earned them a one-year postseason ban.

Chandler, a big man from Indianapolis, was involved in the UCF investigation. The NCAA found that Bender and an associate, Ken Caldwell, whose LinkedIn profile said he worked for agent Andy Miller, assisted UCF in its recruitment of Chandler. He committed to the Knights but did not enroll there, sitting out the 2011-12 year for academic reasons. He spent the previous two years at Northwest Florida Junior College before committing to Oregon. It was his fourth Division I commitment, after previously pledging to Louisville, Xavier and UCF.

Chandler committed to Oregon on Oct. 29, 2013, four days after Kasongo. The 6-foot-9 freshman from Canada has been associated with Bender for quite some time, dating to at least 2011-12 when Kasongo showed up at East Ridge High School in rural Eastern Kentucky. After spending a season there Kasongo transferred to Pikeville High School for one year, and spent this past season at Phase 1 Academy in Arizona. In January 2013, Kasongo told Zagsblog.com that Bender is "my mentor."

Oregon's comfort level in dealing with Bender is unclear - multiple attempts to reach athletic director Rob Mullens for comment were unsuccessful. Instead, assistant athletic director Craig Pintens referred Yahoo Sports to a May 9 statement from the university regarding the investigation of the alleged sexual assault, and a press conference Altman held earlier this month.

This isn't the first time that Bender's name has popped up in a Forde piece, and the big man has apparently had enough of it. In a Twitter exchange with the C-J's Jonathan Lintner, Bender claims that his attorney is now in the process of filing a defamation of character lawsuit against Forde. 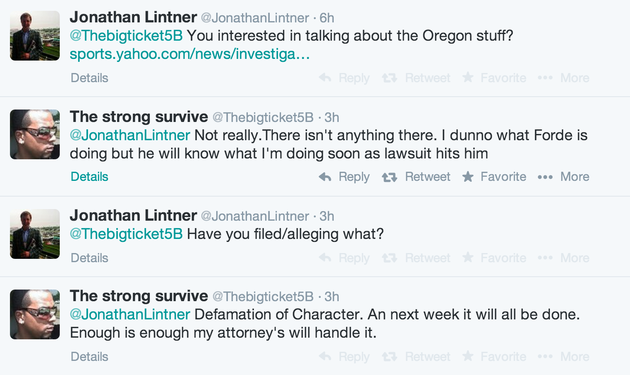 I suppose we'll see how that plays out.