The Louisville baseball team's road back to Omaha will likely have to include at least one victory over their arch-rivals.

Kentucky, which swept the Cardinals in the regular season, is among the three teams headed to Jim Patterson Stadium this weekend to battle it out with U of L for a trip to the Super Regionals. Bubble team Kansas out of the Big 12 and MAC champions Kent State are the other teams headed to Louisville. 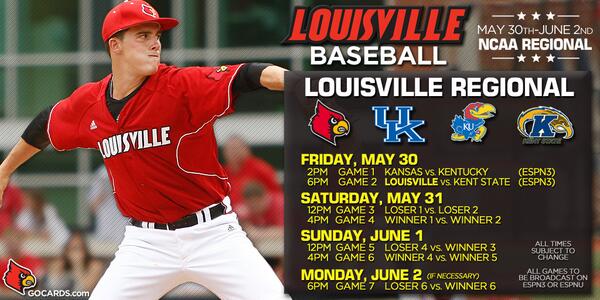 The Golden Flashes are among the most dangerous No. 4 seeds in the tournament. They've been to the NCAA Tournament five times in the past six years, and advanced to the College World Series in 2012.

Louisville has already had two tastes of what Kentucky is capable of. The Wildcats defeated the Cardinals 8-3 in Lexington on April 1, and then completed the regular season sweep with a 4-2 win at Jim Patterson two weeks later.

The winner of this weekend's regional will face the winner of the Tallahassee regional -- headlined by No. 5 overall seed Florida State -- in a three-game series with a trip to the College World Series on the line. You can check out the rest of the 64-team field right here.

The road back to Omaha begins Friday. Get your tickets now.