For those of you who think these News and Notes photoshoots are all glitz and glamor with no hiccups, Eden Glassner is here to set the record straight.

If you only read one thing this Memorial Day weekend (if you haven't already read it), let it be this Fox Sports piece which looks at the two sides of Charlie Strong through the eyes of former players and colleagues at Louisville. Highlights include some insight into the now somewhat famous Strong introductory speech, and the revelation that Strong made "In the Air Tonight" the team's unofficial theme song midway through the 2010 season.

The C-J's Adam Himmelsbach caught up with Peyton Siva, who talked Russ Smith, Montrezl Harrell and a handful of other topics.

On Shaqquan Aaron (Aaron has not been on campus, but he and Siva are both from Seattle and know each other well.)

He's a lengthy kid, a shooting guard or small forward who can essentially play one-through-four. He has a great handle, a high basketball IQ. He can pass and score the ball. I think he'll definitely be helpful to next year's Louisville team.

I talked to him during the year, seeing how he and the guys were doing. He's been great. He still enjoys coaching and said he's got a couple years left in him. He said as long as he enjoys doing it, he's gonna continue to keep doing it.

Now that Russ is gone, who will replace him as the talented yet maddening player that makes Pitino stomp his feet and yell 'Russ!"?

I think it will probably be Chris [Jones] next year. Definitely Chris.

In news that has totally flown under the radar this week, for Seneca High star and the "savior" of Cardinal football DaMarcus Smith is leaving Western Kentucky. Smith will transfer to Butler Community College in El Dorado, Kan., where he'll be eligible to play right away.

A juxtaposed DaMarcus Smith/Teddy Bridgewater would be a great Louisville 30 for 30 doc.

Troubled U of L football signee Sharieff Rhaheed-Muhammad won't be a Cardinal after all.

Another intriguing Cards vs. Cards poll.

Louisville: The final change in the ACC's membership stemming from the most recent round of conference will happen next season, as Louisville will replace ACC stalwart Maryland, who is headed to Big Ten country. The Cardinals were one of the big winners during the NBA Draft early entry process as Montrezl Harrell decided that he would be returning to school for his junior year. If Chris Jones, Terry Rozier and Wayne Blackshear have the kind of season we expect them to have, Louisville will be an ACC title contender.

The ACC and the SEC have come to an informal scheduling agreement, and Barrett Sallee says it's going to rob college football fans of some compelling matchups.

Your details for this year's DeJuan Wheat Basketball Camp: 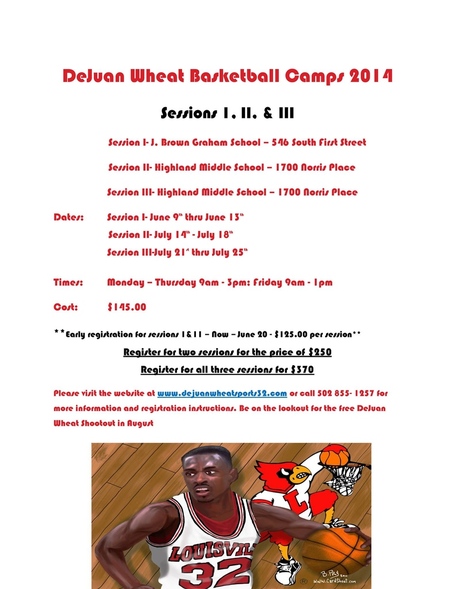 CBS' Matt Norlander looks at the best and worst APR programs in college basketball after a decade.

Congratulations to former Cardinal RB and current assistant Kolby Smith on the birth of Kolby Jr.

Congrats to Kolby and Ashley Smith on the newest member of the Cardinal family, Kolby Jr! pic.twitter.com/FpHe5Zhaxr

Notre Dame is already complaining about its scheduling deal with the ACC.

A formula concocted by FivetThirtyEight.com's Seth Gitter and Peter Hunsberger says that Teddy Bridgewater was the second most (financially) valuable quarterback in college football last season.

Of last season's quarterbacks who were drafted into the NFL, Teddy Bridgewater, now of the Minnesota Vikings, was the most valuable. Winston still bested him, though.

NBA.com takes a look at Gorgui Dieng's rookie season and how his hard work and perseverance paid off in the end.

The night Gorgui Dieng received his trophy for being named Western Conference Rookie of the Month for March, he downplayed the achievement. He was grateful and appreciated the honor, but it was certainly not something to get caught up on. Dieng's ambitions in the NBA are simple: Work hard, get better every day, and in doing so  good things will happen.

On Thursday, that mindset led to another accomplishment.

Dieng was named to the 2013-14 NBA's All-Rookie Second Team for what essentially amounted to his play over the final two months of the season. The Wolves brought Dieng along slowly as a rookie, and in the end that philosophy ended up working wonders for the rookie center out of Louisville. Dieng simply kept working each day with assistant coaches and members of the team's basketball operations department to keep improving his game. What we witnessed was a player who quickly became a viable rotation player in Minnesota's front court.

"I was just ready to play. I don't care if you're up or down, as long as I am on the court. I'm just trying to play for my teammates and do my job," Dieng said in late-March. "I always say stats don't mean anything. Personal stats, I don't care anything about. I'm more like a team guy and I want to win."

According to ESPN's Jeff Goodman, Chane Behanan will work out for the Dallas Mavericks on June 12.

Samardo Samuels throwing down in Turkey:

Likely strengths: College basketball's gradual descent toward re-enabling physical defense is fabulous news for the Cardinals, who are better at it than most anyone. The Cards were No. 4 in defensive efficiency last season, and that could improve as Mangok Mathiang develops and Montrezl Harrell continues to progress toward stardom. They'll be as difficult to score over as most any frontcourt. Harrell's return to the Cards was unexpected, but immense. Without him they are a high-teens pick.

Potential weaknesses: The Cardinals were only great offensively last season when Luke Hancock made shots. With Hancock gone, and also All-American Russ Smith, the team will have to find a consistent means of generating points. Coach Rick Pitino rarely (never?) has been one to build an offense from the inside-out, but Harrrell is the team's best player and can score inside and from the foul line. If he's not featured, can Louisville score with the elite?

Key factor: The days of "Russdiculous" long past, Smith gave the Cards a sense of stability in the backcourt that could be missing if Chris Jones does not learn the same lessons. He had some of the same ability to score in bunches, some of the same tendency toward mental errors. He has not been as adept, however, on D. Jones, soph Terry Rozier and freshman Quentin Snider have enough talent to provide effective backcourt play, but being a guard for Pitino is a full-time job.

Louisville popping up in these little tidbits is becoming a bit of a May/June tradition.

4 schools appeared in the top 10 in the country in football, men's basketball and baseball this year. #okstate, Louisville, Oregon & Florida

Cardinal Strong's daily football countdowns are back, and that's reason to be pumped.

And finally, a reminder that regional hosts for baseball's NCAA Tournament will be announced at 9 p.m. tonight, while the full bracket will be revealed tomorrow at noon on ESPNU.