Peyton Dunn spending the last few days of the school year the way they're supposed to be spent.

Five-star forward Brandon Ingram (2015) is very interested in both Louisville and Kentucky.

Ingram said on Sunday at the adidas Gauntlet session that he received a scholarship offer from U of L in February and the Cards "want me bad."

Ingram said he received a scholarship offer from U of L in February, and he has spoken and exchanged text messages with coach Rick Pitino fairly regularly.

"I like them a lot," said Ingram, who plays for the Jerry Stackhouse Elite club. "I'm just hearing good things about Coach Pitino and how he's into every practice. It tells a lot about how he trusts his guys on the court. He knows what everybody is capable of and is not just going off what the assistants tell him. He's going off his opinion."

Ingram also praised Pitino for helping develop North Carolina native Montrezl Harrell into an NBA prospect in his two years at U of L.

"It just shows how much the coach pushes his players," Ingram said. "If it hadn't been a good coach, it might not have happened."

The U of L softball team saw its season end in disappointing fashion over the weekend, dropping back-to-back games to LSU and Boston U in the Tucson Regional. The Cards had an up-and-down season, but did claim the AAC Tournament title and the program's 11th consecutive NCAA Tournament appearance.

A big thanks to the U of L senior class and a congratulations for all your accomplishments over the past four years.

Speaking of U of L softball, the program is hosting multiple camps this summer, which you can sign up for here.

David Levitch putting in that work. 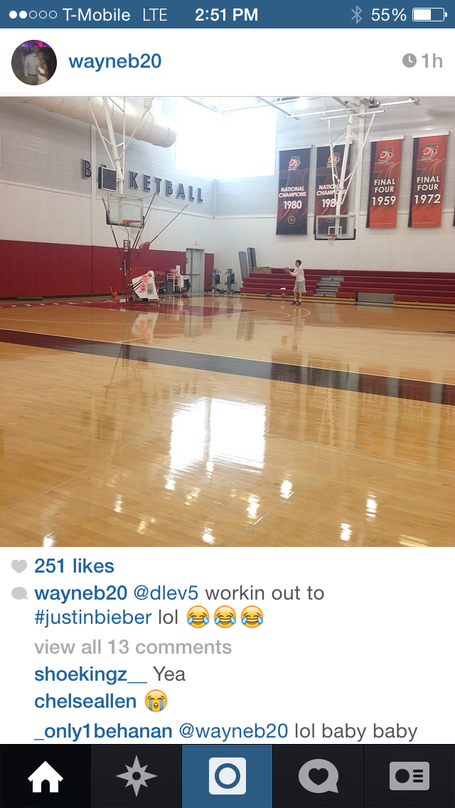 Terrence Williams is spending his spring playing for the Meralco Bolts of the Philippine Basketball Association (PBA). He scored 19 points in a game over the weekend, but was just 4-of-19 from the field.

Louisville checks in all the way down at No. 50 in ESPN's Preseason Football Power Index. Florida State is No. 1.

DePaul basketball was apparently made fun of on "American Dad" last night. I don't really have anything to add to that. It happened and it's kind of funny.

He's not really a hero. He's pretty much the exact opposite of a hero. He's like the Riddler of non-chotchdom.

Teddy Bridgewater will be appearing on "The Deener Show" on ESPN 680 Tuesday morning at 8.

Louisville baseball checks in at No. 7 in the latest Perfect Game Top 25. The Cards slipped to No. 12 in the Baseball America Top 25, and are No. 20 in the latest RPI rankings.

ESPN does not list Louisville among its top 16 contenders to make the first college football playoff.

Lawyers are now getting involved in the issue of Fed Ex and Russ Smith's lost Final Four jersey.

Somewhere in that process, FedEx "discarded the box" that had Smith's jersey in it, according to a FedEx spokesperson.

Now lawyers are involved. After working over last weekend with FedEx, Russ Sr. asked his lawyer to step in. The lawyer, Russ Sr. said, reached out to FedEx on Tuesday and is working with the shipping company to find Smith's jersey.

"I'm so disappointed," Smith Sr. said. "I feel so bad for my son. I said, 'You worked hard for this. And for it to just be thrown away, I can't let that happen.' I had to step up to the plate and get something done."

LeSean McCoy says he wishes the Philadelphia Eagles had drafted Johnny Manziel with their first round pick. Instead, the Eagles took U of L's Marcus Smith.

The KFC Yum Center is expected to generate $500,000 more profit from its operations in the current fiscal year than originally budgeted, according to managers of the downtown arena.

More on U of L's rowing title and its first trip to the NCAA Tournament.

ESPN's Matt Fortuna picks Louisville/Miami as 1/2 of his "ultimate ACC road trip" for week one of the season.

Our pick(s): Florida State vs. Oklahoma State AND Miami at Louisville

Why you should come along: Hey, we said this is our choice, right? That means that we can pick two games if we'd like, and what better way could we open the season than to take in the Cowboys Classic featuring the defending national champs before heading to Louisville for the Cardinals' ACC debut?

The first game is another prime nonconference clash, this time featuring the Big 12. We know the Seminoles will enter as heavy favorites, but this is our first look at them since their finale last season in Pasadena, Calif. Can Jimbo Fisher get this group to keep its eye on the prize and avoid complacency with what will likely be a preseason No. 1 ranking attached to it? I'd personally love to check out JerryWorld as well, as I have heard nothing but good things about that place (at least for football games). Clemson and Georgia offer plenty of intrigue, too, but let's remember that this is a rematch from last season, one we had taken in. While both teams could perhaps make strong runs for their conference titles and maybe even more, the matchup, at least this early, lacks the luster that the 2013 one had, as both teams lose so much star power (Tajh Boyd, Sammy Watkins and Aaron Murray).

As for Labor Day night, you can bet the atmosphere will be electric for the Cardinals' first game in their new league -- and for their first game (again) under coach Bobby Petrino, as well. It will have been just more than nine months since these two teams closed last season at the Russell Athletic Bowl in Orlando, Fla., and you can bet Miami hasn't forgotten about the way Louisville ran it off the field in a humiliating 36-9 defeat. The national spotlight will be on these two teams again as they close out Week 1.

Kevin Keatts is gearing up for his first summer as a head coach.

Shoni Schimmel's WNBA career is off to a sizzling start.

Five-star point guard Dennis Smith says Louisville, Duke and North Carolina are the three schools that have been on him the hardest recently, and that U of L's move to the ACC bodes well for the Cards' chances.

The Wolverines have shown interest, but Smith could be a hard pull from ACC-country. Louisville has been coming on strong and Smith is intrigued by the Cardinals upcoming move to the ACC.

"That's a good thing going for (Louisville) right now," he said. "They are going to the ACC. There's going to be some stiff competition in the ACC. It's going to be fun to watch this year."

Duke is also rumored to be a heavy player in the North Carolina native's recruitment and have raved about the prestige of the Blue Devil program.

And finally, a little taste of Russ at the combine, which includes him burying 10 straight treys at one point.