I feel like it's now allowed to be spring in Louisville.

Current Spring Game forecast: high of 63, low of 50 with scattered thunderstorms expected (40% chance of rain). Let's go ahead and improve that over the next couple of days.

Yes, I'm aware that they beat us twice and advanced further in the tournament than we did, but I have no problem celebrating the mocking of anyone with the audacity to display a UK flag prominently on U of L's campus. 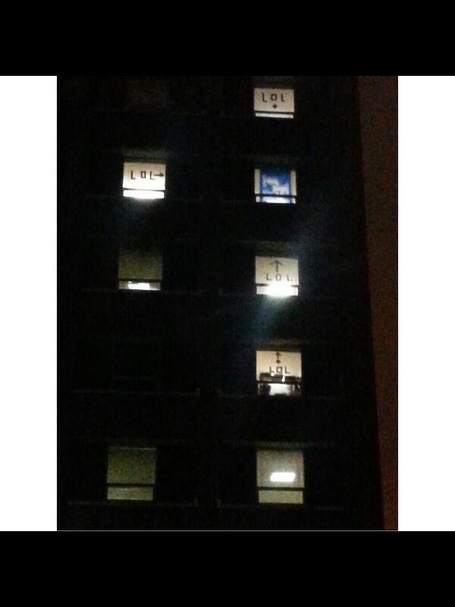 Via CBS and Turner Sports, last night's national championship game pulled a decent 12.9 overnight rating, down 10 percent from the 14.3 the Louisville-Michigan title game did (Kentucky-Kansas in 2012 pulled a dreadful 12.1).

From Jeff Greer, a quick synopsis of Louisville's place in the early top 25 rankings released so far.

Most of these rankings have specified how they've factored Montrezl Harrell's decision into their thoughts on Louisville. You have to assume all of these will be altered at least slightly once we know what Trez is going to do.

Your schedule of Russ Smith appearances between now and April 17: 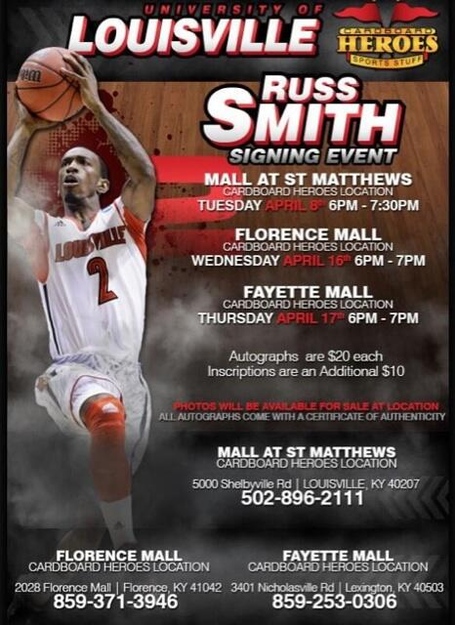 Montrezl Harrell is up from No. 18 to No. 16 on Chad Ford's NBA Draft Big Board for ESPN.

U of L women's lacrosse player (lacrosser?) Kaylin Morissette had a record-setting performance over the weekend, helping her earn Big East (not a typo) Defensive Player of the Week honors on Tuesday. Teammate Jamie Redding was named to the league's Weekly Honor Roll.

ESPN's Andrea Adelson says everything is different in Louisville this spring.

While Petrino the man needs to be different, Louisville is banking on the same Petrino who initially took Louisville to the heights Strong recently matched. To do that, Petrino is coaching the way he has always coached. Practices are now run at a much faster tempo than under Strong. Petrino is constantly in his players' faces, yelling at them to get it right. All that was quite an adjustment initially. "Hustle!" and "Go faster!" are two key phrases that have returned to the Louisville lexicon.

"At first, everybody was looking around like, ‘What's going on?' but for the most part, everybody's taken it in stride," said defensive end Sheldon Rankins. "We have gone along with everything he's saying, and been pretty positive about it because at the end of the day, we're all a team. We're all here together and we have to make it work."

The changes have been especially dramatic on offense, and most especially with the quarterbacks. Bridgewater might have been the centerpiece in Louisville the last three years, but he is gone, and that leaves quite a conundrum. Petrino places much heavier demands on quarterbacks; they have more checks to make, more complicated schemes to learn and different timing routes to perfect with their receivers, all while practicing at a breakneck pace.

No passer on the current roster has started a college game. Will Gardner, who was the backup last year, has taken the lead in the quarterback competition, but the offense has much to improve on before it functions the way Petrino wants it to function. One practice last week lasted 2½ hours, and several practice periods were repeated until the players got everything right.

"They think they're going fast right now, but we're not even close to where we need to be," Petrino said. "My dad gave me a bad time about it. He said, ‘That was the longest practice I've ever seen of yours,' and I said, ‘It's because we're not going fast enough to get the reps in.' We have a set amount of reps we have to get done, but we can't go quick enough."

While I'm not certain that "most" retired NBA players are broke, this is still a nice look at the remarkable post-basketball achievements of Junior Bridgeman.

I am buying a new computer tonight. Just thought you should know. Say goodbye to the old friend whom you never met but who helped create all the memories you remember and love from the start of the summer of 2010. He didn't have a name, but he was a champion...also, he was a male.

As sad as you were two Friday ago and the week after, you were not this guy:

So this guy punched the window, yes that's blood on his knuckles, &amp; he's sitting outside the bar crying lmao pic.twitter.com/NwE8HCBqP9

The best NCAA Tournament fan GIFs, all in one place.

Howie Lindsey says Louisville's strength in 2014-15 figures to once again be its guards.

The New York Times' Emily Brennan writes about the Kentucky Derby as a rite of passage.

The Big Lead likes Louisville to start next season in the top 10.

9. Louisville (31-6, Sweet 16) - Disappointing end to the season for the Cardinals, and the Russ Smith era is over. Also out of eligibility - 2013 Final Four MOP Luke Hancock, and center Stephan Van Treese. The big loss will be if Montrezl Harrell leaves for the NBA. Then they'll have to rely on promising-but-thin Mangok Mathiang inside. The perimeter will be fine, despite the transfer of Kevin Ware. Chris Jones will run point, and Terry Rozier will slide into the Russ Smith role. They'll need more scoring out of Wayne Blackshear. Four top 75 recruits are highlighted by forward Shaqquan Aaron and guard Quentin Snider.

The Kentucky fan who got the "2014 nati9nal champions" tattoo says he's keeping it.

Unlike Lexington, nothing in Louisville burned to the ground last night.

Final four next year? Yup it's a must #CardNation

Russ Smith is your Ken Pom National Player of the Year for a second straight season. 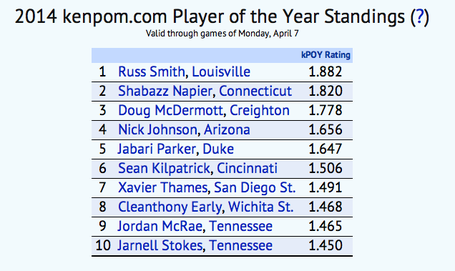 Also, Louisville finished No. 1 in Pomeroy's overall rankings for the second straight year.

And finally, we have 147 days until the Cards kick things off against Miami on Labor Day night. Let the seemingly endless countdown begin.