It's the biggest week of the year in the Bluegrass State, and two of its most historical figures (Abraham Lincoln and the CCBM) are ready for the festivities.

The U of L baseball team bounced back from its most disappointing week of the season in a big way, posting a perfect 5-0 mark and sweeping a weekend series with Connecticut. The Cards remained at No. 13 in this week's Baseball America Top 25, and in second place in the AAC standings behind Central Florida.

The Cardinal Nine will host Ohio State Wednesday at 6 p.m. before hitting the road for a key three-game series at South Florida.

After hitting .778 with a home run, two doubles, five RBI, four runs scored and a 1.333 slugging percentage in four starts as the Cardinals' designated hitter, sophomore Danny Rosenbaum was selected as the AAC Player of the Week. 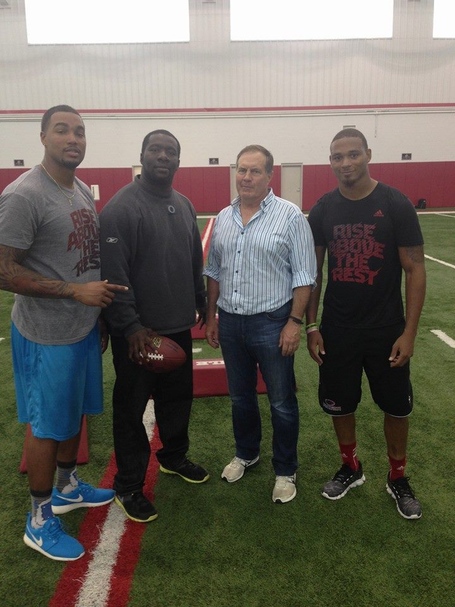 The SEC's decision to not move to a 9-game conference schedule is good news for the Louisville/Kentucky rivalry.

Here's a cool preview of the mini-documentary that's coming out on American Football Without Borders (AFWB), the charity started by former Cards Breno Giacomini and Gary Barnidge that provides football camps for children in countries where little is known about the sport.

Yahoo's Eric Adelson joins the list of people saying that there's no real reason for why Teddy Bridgewater's stock has fallen so dramatically in recent weeks.

This gallery of dream non-conference games featuring SEC teams is worth checking out just for the fake No. 1 selection.

Montrezl Harrell is one of the 12 worst career major conference free-throw shooters in the past 10 years. Thankfully, he has another season to change that.

Sometimes Russ Smith just feels like sitting in on classes at Purdue. 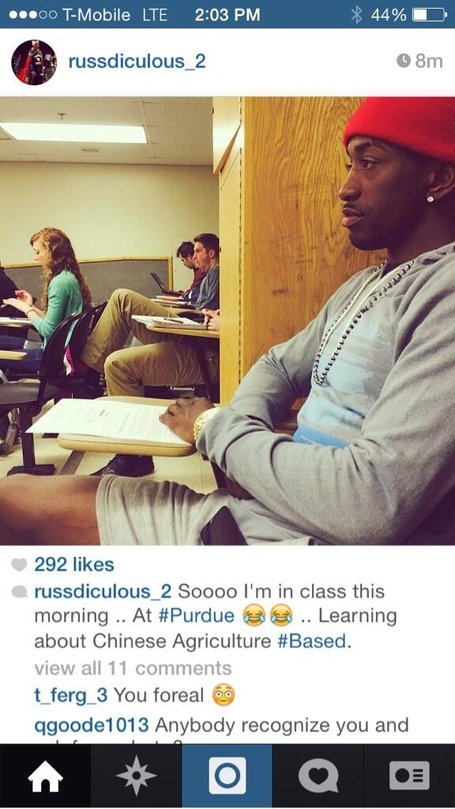 Finished up my first class at Purdue .. Omw to my second lol

Washington's 247 site catches up with James Sample, the former Husky safety who will be suiting up for the Cards this season.

ESPN's Andrea Adelson talks about the signing of Pat Thomas and how it gives Bobby Petrino some much-needed depth at the QB position.

Russ Smith will be signing autographs (and/or recyclable dogs bearing his name) at Brownie's Grille & Bar tomorrow night from 6-7: 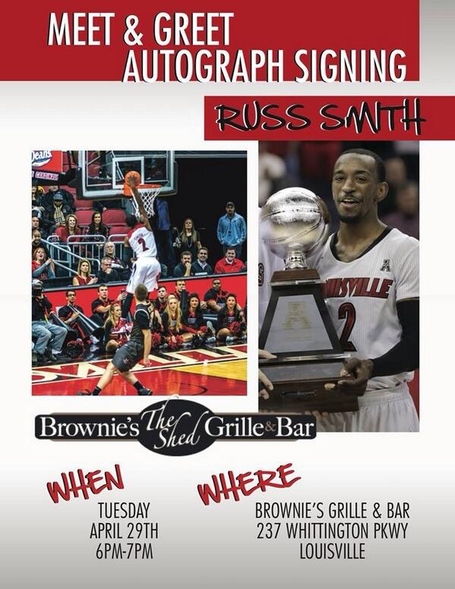 Luke Hancock, meanwhile, will be appearing at Shively Sporting Goods on Wednesday night: 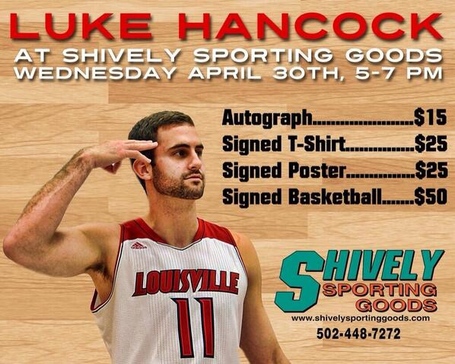 More on Chane Behanan officially declaring for the draft.

Garrick McGee won the weekend with this Friday tweet in response to Neal Brown's ridiculous comments.

The University of Louisville team beat out seven other state university teams to place first at the 2014 Alltech Innovation Competition in Lexington. The team's venture - Trifecta Cooking Equipment LLC - is the patented FuturFry deep fryer, which will help restaurant operators save 40 percent on annual cooking oil costs.

ESPN's Andy Katz says that Louisville is one of the early winners of the offseason.

Louisville: The Cardinals had the most electric frontcourt player in the American last season in Montrezl Harrell. Few players could keep him off the backboard when he was going for a flush. The Cardinals continue to reload but don't need to restart in the ACC sans Harrell. They won't have to with his return.

The Score explains why it believes Teddy Bridgewater is a first round talent.

Jennie Rees looks at why each Derby contender can and cannot win on Saturday.

This Barbara Livingston shot of Tapiture working out in this morning's monsoon is tremendous.

The thunder of God not allowing me to stay asleep for more than five consecutive minutes was less tremendous.

The AJC takes a look at Calvin Pryor and the possibility of him becoming an Atlanta Falcon.

The 2014 Card Chronicle Derby Eve Gala is officially set for this Friday night at the Gattiland on Lyndon Ln. Join us for an evening of Coors Light cans, air hockey and six straight hours of Enrique Iglesias' "Bailamos" on repeat. There will be no celebrities and tickets are $7,000.

Also hosting Derby events this weekend is U of L emcee and noted entrepreneur Joey Wagner. He'll again be hosting the "Grey Goose Lounge Powered by Monster Products" this Thursday-Saturday on Main St. 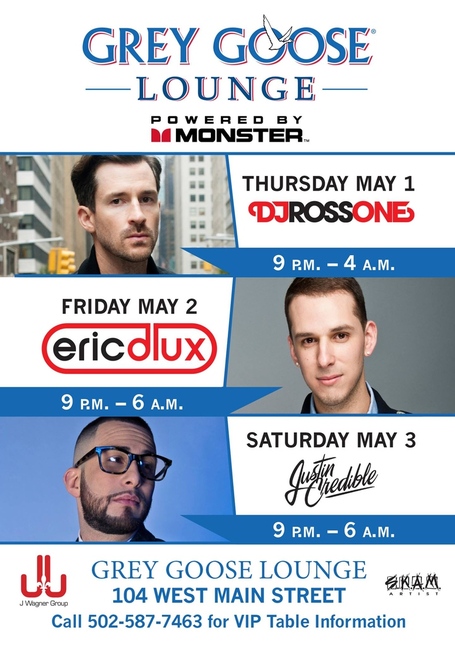 Also, anyone who mentions Card Chronicle at the door at any point before midnight will get in for free on any of those three nights. That's not a bad little deal.

The Omaha World Herald writes about Akoy Agau, who remains positive after a freshman season that tested his resolve.

"High school to college, I knew it was a huge step - I didn't realize it was such a big step," Agau said in a recent telephone interview. "It was difficult. Those guys who had been here, they were the veterans. They knew all the tricks."

It didn't take many practices for him to realize he wasn't strong enough. He hadn't built up enough endurance. He needed to get a firmer grasp of the defensive system, too.

The way he puts it, those three-hour practices were never as torturous as the summer conditioning workouts that occasionally left him wondering if he could handle this elite basketball factory.

Agau knows he belongs now. But he had plenty of humbling examples in year one that showed him how much better he can get.

"I was able to do it here and there," he said. Just not consistently enough, he said.

So he understands why he appeared in 19 of the Cardinals' 37 games this season, averaging five minutes per contest. He scored 17 points, making 7 of 9 field goals. He added 21 rebounds in 95 minutes.

But that lack of playing time hasn't seemed to sour his experience at Louisville - where Agau said the intensity of the basketball fever is comparable to the yearlong football frenzy back home. He doesn't sound like a guy planning to join college hoops' growing pool of transfers.

"I made this decision on how it would benefit me later on in life, in basketball and in school," he said.

His goals haven't changed. He says Louisville's the best place for him to achieve those.

Add the Miami Dolphins to the list of teams targeting Calvin Pryor.

Despite his poor pro day, there are still some around the NFL who see Teddy Bridgewater as a "slam dunk" pick.

The Louisville women's lacrosse team capped of an undefeated conference season with their first league championship over the weekend.

And finally, there was a CC wedding shower over the weekend (quick synopsis: it was Derby-themed, both of us drank too much and I was given a giant bag of Airheads) and I can't recommend the events service that put the party together highly enough. If you're planning party or a shower or anything birthday/wedding-related, check out L&M Detailed Events. They made the whole evening more aesthetically pleasing and more altogether enjoyable than I could have ever imagined.