Cadets Michael Bredfeldt, Taylor Hefty, Ashley Young and Alec Gaukel of the U of L Air Force ROTC show off their Cardinal pride with General Mark Welsh, the Chief of Staff of the United States Air Force.

Adam Zagoria says that Chane Behanan is not heading to Colorado State and will instead declare himself eligible for the NBA Draft, although Behanan himself tweeted that this isn't the case...yet.

"We've been in contact with Chane, and are aware that he is looking at all options to continue his playing career. We want what is best for Chane, and will support him in whatever decision he makes. We will know more in the coming days."

Bobby Petrino participated in the post-spring-practice ACC coaches call on Wednesday and said that it's time for Louisville to take things to the next level.

"It's time to go to the next level," Petrino said. "It's an exciting time ... We feel like we can go in and compete. That's certainly our goal. We're going to have to show it."

Will Gardner, Petrino said, stepped right in line to be the next quarterback at Louisville, and the redshirt freshman is learning how to be a better leader. Teammates certainly noticed this spring, and Gardner responded with a 542-yard, four-touchdown spring-game performance, carrying himself like a veteran signal caller.

"In his mind, there was no doubt who the starting quarterback was going to be," Petrino said.

Mel Kiper believes Calvin Pryror will be selected before Teddy Bridgewater on May 8, and that he is the best safety available in the draft.

"You look at Pryor, Pryor's just lights out," Kiper told Rick Bozich. "He competes. The coverage ability, I've watched him make a lot of plays in coverage. His 40 time (4.58) is reflective of how good he is ... Calvin Pryor would be a great pick. People question his coverage ability. I don't. He's an enforcer. He's a hitter. He's a great kid and a very consistent player."

Charlie Strong's bus tour of Texas isn't exactly off to a great start.

The thing about Joe T.'s is that there's no menu. "How do you know what to order?," Strong asked. You get either fajitas or enchiladas. But on this night, truth was served with margaritas and beer.

"We have everything available, and I don't know why we can't be successful," Strong said. "There's no reason for us not to be. Now, I can't tell you how soon it's going to be. Don't hold me to that. Don't say, ‘Ooh, coach said next year we'll be in the national...' We will not be in the national championship game."

Realizing what he just said to hundreds of fans, Strong laughed nervously, looked at emcee Ahmad Brooks and said, "OK, you ready to go?"

As Eric Crawford points out, the biggest news here might not be Strong's statement, but the fact that he's doing a bus tour.

Charlie Strong's first spring as University of Texas football coach is in the books, and now he has embarked on a statewide bus tour to meet and greet fans.

You heard it right. It's the Comin' On Strong bus tour. It's entirely possible that the dude who showed up naked and high at a South Carolina Walmart was more comfortable than Charlie Strong barnstorming the state of Texas. But, hey, I'm on board.

They used to have caravans at the University of Louisville. The last one, I believe, made six stops around the state. Strong made one of them. He talked to a crowd in Shelbyville for about 20 minutes, then declined to take questions from the media.

Strong and Texas is still just about the strangest marriage I can imagine.

As you should have...

.@CardChronicle i don't know why I thought of you instantly when I saw this, but here ya go pic.twitter.com/2gp4VmUM0b

Heather Dinich of ESPN says that the only thing holding Michael Dyer back from being a star this season is the elite talent on his own team.

Shoni Schimmel will be at mall St. Matthews tonight: 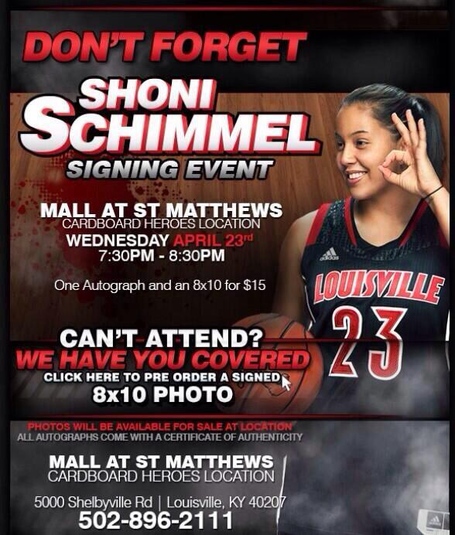 Russ Smith and Luke Hancock, meanwhile, will be at Dillards in the same mall. 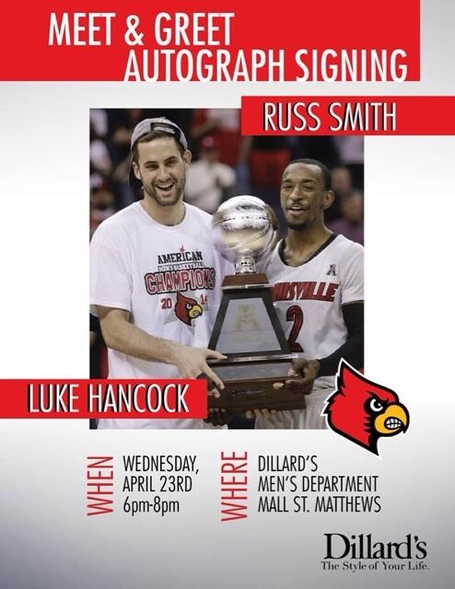 Bakary Konate, the player many believed would join the Louisville basketball team midway through last season, has committed to Richard Pitino and Minnesota.

Sports Illustrated has Teddy going to the Vikings in its latest mock draft.

How low will Teddy go? That's the popular question that seems to be sparking wide-ranging debate as this year's longer-than-usual draft season unfolds. While some mocks have him even falling out of the first round these days, I can't see how that worst-case scenario unfolds, and I'm pushing back against the anti-Bridgewater movement. The Vikings seem like a nice fit, with offensive coordinator Norv Turner's experience with young quarterbacks and Matt Cassel re-signed to be the franchise's 2014 starter. UCF's Blake Bortles is Minnesota's other option, but there's a chance he needs even more patience and polish than Bridgewater.

And Calvin Pryor going to the Bears.

The Bears are going to get help for their aging defense in the first round and there are some very good options at positions of need even if Pitt defensive tackle Aaron Donald doesn't make it to No. 14. Oklahoma State cornerback Justin Gilbert, Alabama inside linebacker C.J. Mosley or Florida State defensive tackle Timmy Jernigan all would be solid additions for the Bears, but the void at free safety is the most pressing piece of business in Chicago, and Pryor fills the bill nicely. At the moment, the Bears would have to rely on fourth-year safety Chris Conte, who is rehabbing from shoulder surgery. Pryor is known for his hard-hitting style of play, and both he and fellow first-round safety prospect Clinton-Dix are seeing their stock rise as the draft nears.

The Louisville baseball team took care of Western Kentucky last night behind a strong effort from freshman lefty Josh Rogers. The Cards are back at it tonight, hosting Morehead State.

Bobby Petrino will appear on "The Deener Show" with Drew Deener tomorrow morning at 7:30.

More on Mel Kiper saying Calvin Pryor is the top safety in the draft.

I think as rival fans, you have to almost be happy to see Dakari Johnson announce that he's returning to Kentucky for another season. UK was already going to be really good and really big, so why not add to the crowded frontcourt and create less playing time for somebody? On a team with Dakari, Willie Cauley-Stein, Marcus Lee, Karl Towns, Trey Lyles and Alex Poythress, it's a guarantee that somebody gets pissed off this season.

It's also a guarantee that the brilliant "put your head down, drive into the lane, get a foul call or toss up a crazy shot that can be rebounded by somebody" offense is on full display for five months in Lexington again.

Yet another NFL executive says there are no "wow" quarterbacks in this year's draft.

The freshman hype has already started for Anas Mahmoud.

The folks in Clemson are saying that Bobby Petrino's return to Louisville has made their path to an ACC title more difficult.

And finally, the Syracuse Post-Standard looks at Louisville and its re-adjustment to life under Bobby Petrino.