It's A New Era For U of L Women's Golf

Share All sharing options for: It's A New Era For U of L Women's Golf

Arriving in Louisville in summer of 2012, Head Coach Courtney Trimble and Assistant Coach Mary Bryan inherited a women's golf program in desperate need of new leadership. Untapped potential was present and hiding in the shadows, but an understanding of success and how to achieve it was nonexistent. The young women comprising the program needed an example to follow, they were in a dire search to learn, but most importantly the ladies were looking for a staff they could trust and believe in.

People believe in success, they trust in achievement and they admire champions, qualities Courtney and Mary embodied impeccably. These qualities led Tom Jurich to reach out to the two highly decorated coaches and bring them here from the University of Central Florida. Tom's Midas touch seems to have struck again as the Cardinals just captured the 2014 AAC Conference Tournament, their first conference title since 2010, and the ladies have qualified for the NCAA Regionals making it their first appearance since 2011.

The emerging success of the golf program should come as no surprise to anyone familiar with Courtney Trimble or Mary Bryan. Trimble was highly successful throughout her high school career, recently inducted into the school's hall of fame, and was also an All-American in her playing career at Auburn University. As an assistant coach at Auburn, Courtney was a part of several SEC championships and NCAA Championship appearances. She then took her knowledge and experience to Central Florida and guided the Knights to an amazing turnaround, leading their women's golf program to their first victories in over a decade. Courtney is a champion, her expectations are to be the best, and it is evident her winning way and attitude is beginning to pay dividends here at Louisville. 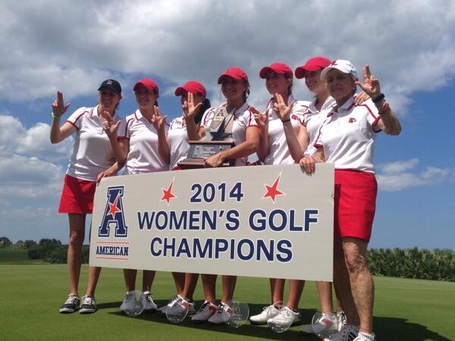 To those familiar with the history of the LPGA and the efforts to expand the game of golf to all women, of all ages throughout the country, Mary Bryan is a legend. She was a pioneer for the ladies game, not just with her achievements on the course, but with her impact off it. She was a part of the era of the LPGA that took the torch from the ultimate champion Kathy Whitworth and passed it onto Nancy Lopez and Patty Sheehan. After her playing career, she worked for ESPN, CBS, ABC, NBC and the Golf Channel for over 20 years. Mary was the first woman to announce and commentate a men's major when the PGA Championship was played at Riviera in 1995, and she sat in the tower with Jim Nantz at Valhalla in 1996. Mary Bryan is also an accomplished instructor and has taught at academies and courses throughout the world. Her strength was always the short game, her putting and chipping expertise has made her invaluable to the Cardinal regime as an instructor, but these young ladies have more importantly responded to her unrivaled knowledge and experiences with the game of golf.

The Cardinal roster is balanced with senior leadership and young, blossoming talent. Tara Lyons and Katie Petrino have set the bar high for the underclassmen, and youthful ability is beginning to emerge in Laura Restrepo, Emily Haas and Shannon Gramley. The teaching and leadership of Coach Trimble and Bryan has certainly fast tracked the resurrection of the golf program, but competition from within has brought about the best in all the lady golfers. Practices and qualifying tournaments have been a grind, and more often than not four, five or six ladies are fighting tooth and nail for one or two spots on the travel team.

Success breeds success and the women's golf program at the University of Louisville has certainly benefitted from the accomplishments of Cardinal Basketball, Football and Baseball, but these young women needed to see and understand success first hand. The new coaching staff has been there and done that and are a perfect fit in the Louisville family.

Their climb to the top has just begun, and Coach Trimble and Bryan aren't the type to rest on their laurels or embrace complacency. Recruiting is the biggest challenge facing the Cardinals as they prepare for the future and the exciting move to the ACC. Louisville isn't exactly the tropics as we all found out this winter, but in today's society good news travels fast. The word is out about Louisville Women's Golf, and the future headlines will spell out CHAMPIONS!