Luke Hancock and Carter Bunch: Both allergic to haters.

ESPN's Andrea Adelson says that U of L's spring game attendance is just the latest bit of evidence that proves the Cardinals belong in the ACC.

The C-J's Jeff Greer catches up with Preston Brown.

BROWN: You never really know. I'm just enjoying the whole process, taking it day by day. it's fun for me and my family to fly across the country and do things I never thought I'd be able to do.

As far as feedback, what have the teams you've interacted with told you?

BROWN: I've been hearing pretty good feedback, just saying they like my film. I've been hearing good things. The teams don't want me to say where I've worked out, but I've been to five places. I had four workouts down in Louisville.

(Note: Reports have said Brown worked out with the Atlanta Falcons, San Francisco 49ers, New England Patriots, Jacksonville Jaguars, Tennessee Titans and Buffalo Bills. He was also expected to work out with the Minnesota Vikings.)

I never thought Teddy Bridgewater would be the most-analyzed prospect in this Draft. Have you been following that story at all?

BROWN: I can't turn on the TV without seeing the Pro Day pop up. I just know Teddy's the best quarterback in the Draft. He has no problem with this process. The media don't see what teams do in private workouts. He was the leader of the whole team. He had so much command over the offense it was incredible. The checks he made when we'd switch up on him, the calls he made. The teams we played, the other quarterbacks in the Draft -- I don't see them as good as him.

What have you heard from your old teammates about the new coaching staff at Louisville?

They've been saying it's different but they're enjoying it. They looked good from what I saw at a few practices. I know the offense is doing well from the spring game. The defense will be fine after a few practices and a full summer of getting ready.

Not many players have come through here and had more growth both physically and mentally from their freshman year to their senior year than Brown. He went from talented but erratic to as reliable a middle linebacker as I can remember. We're really gonna miss that guy.

I will fully admit to never liking the "L1C4" hashtag and to never having used it. That said, I was thrilled and thoroughly entertained by the fact that Kentucky rolled out the "BBNFirst" -- a hashtag COMPLETELY fresh and unrecognizable -- era on Monday.

"You Don't Want These Cats": dropping summer, 2016. Mitch Barnhart will introduce the video -- starring an 18-year-old freshman in a sleeved jersey -- while wearing a blue mock turtleneck and standing in front of the Burger King FUN Center, formerly Rupp Arena.

Groundbreaking stuff, all of it.

Oh, right, we....we already did that. He's coming back. That remains cool.

While most of the sports world has been focused on the unlimited meals for athletes news, the NCAA could also be making a fairly significant alteration that would eliminate the hardship waiver "loophole."

This isn't a massive revision, but rather a tweak coaches have lobbied for in the past couple of years. And the rule change is not official yet. The amendment to current transfer rules has to do with hardship waivers and an ensuing sixth year of eligibility. The NCAA announced on Friday that hardship waivers -- something players now apply for with regularity upon transferring from one place to another; it's cynically considered more and more of a loophole -- should instead be swapped for one more year of eligibility.

For example, this would mean that a player leaving one school for another in the name of being closer to home for family/health reasons would simply have an extra year to play college basketball. But the player would sit a redshirt year first. This proposal would be for all sports where applicable at the D-I level.

"We hope this change will encourage student-athletes who must transfer based on hardships to focus on the circumstances prompting the transfer during their first year and adjust to their new school, while giving them a season back to complete their eligibility," Council chairperson Amy Huchthausen said in the NCAA's statement.

Nobody wants to coach in the SEC.

In a rematch of the 2010 national championship...match, Louisville defeated Akron 1-0 over the weekend in its final match of the spring season.

I was taking an afternoon jog (not a humble brag at all if you'd seen the pain on my face at any point during the endeavor) and was met with this piece of sidewalk glory about midway through. 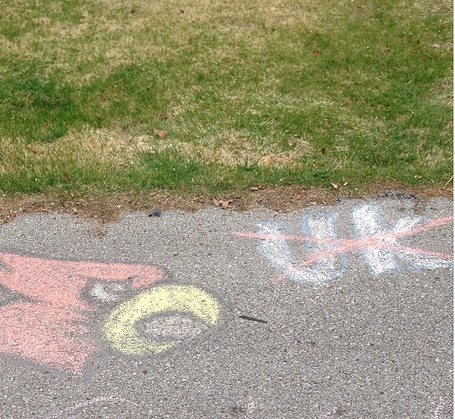 The kids are all right.

ESPN's Myron Medcalf looks at why college coaches should turn down the NBA.

Roselle Catholic (NJ) guard Isaiah Briscoe has been one of Rick Pitino's top 2015 targets for some time, and now he officially has a U of L offer.

The 6-foot-3 Briscoe, ranked No. 19 in the Class of 2015 by ESPN.com, said he's definitely considering Louisville now.

"Just the way he presented his program. He was very honest with me. Just a relationship that I think we can build in years to come, I think it would be great....I'm blessed. I'm thankful for the opportunity."

He said he's planning on visiting the school at some point.

It is officially CCBM running season.

In its debut season, the U of L cycling team was able to pick up its first road victory over the weekend.

Never let anyone tread on your CC.

Since Louisville's new (old) head coach is making around $700,000 less than its old (old) head coach, U of L's new assistant coaches are now making about $500,000 more than Charlie Strong's help was. The new combined salaries of Cardinal assistants would rank 11th nationally, according to USA Today's college football salaries database.

This is the most Kentucky thing ever. 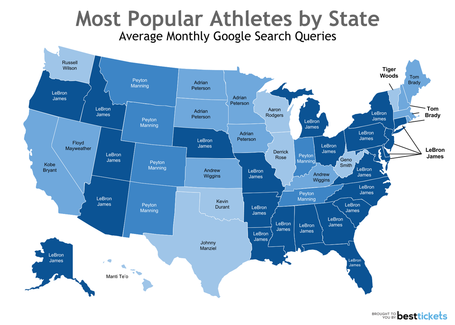 While names like Tom Brady, LeBron James and Peyton Manning dominate the national landscape in terms of most-searched athlete, Kentucky's is a basketball player who was in high school this time last year, and who wound up playing his only season of college hoops for Kansas.

Florida State's 2013 national championship trip cost the school almost $500,000. Doesn't it seem like we see one of these stories every three months? I still don't understand college football.

The Louisville baseball team will be going pink for its home game against Western Kentucky on Tuesday. 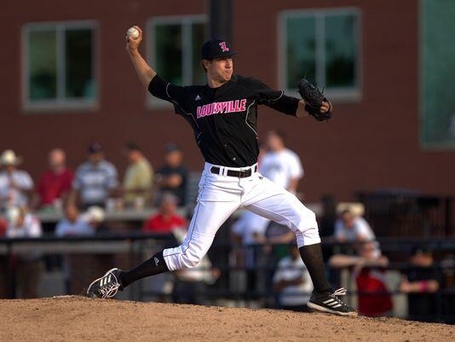 First pitch is slated for 6 p.m., and $1 from every lemonade sale supports Home Runs for Hope, a fundraiser supporting Gilda's Club of Louisville. The Cards beat the Toppers 5-3 in Bowling Green last month.

Via Jody Demling, Louisville has offered a scholarship to 6'5 wide reciever Trevill Holcy from St. Cloud High School in Florida.

For those wondering if this was still going on...

Of all the websites rival fans have signed me up for, who would have thought the only one impossible to unsubscribe from would also be the most recognizable? It is a nice confidence boost to see that I'm still attracting matches in Lexington, though.

U of L signee Jaylen Johnson's alley-oop from his mom has gone viral.

Mashable has a terrific look at the remarkable rise and fall of AOL Instant Messenger, which dominated the world of online communication for years and then abruptly fell off the face of the earth.

I remember my older brothers telling me when I was younger than I would lose touch with almost all of my high school friends after leaving for college, which always made me sad. That never ended up happening, thanks in large part to the emergence of AIM (cell phones also really helped). When I was in college, everyone was on AIM, and I could always see when my friends were headed to class or going to sleep or visiting other friends, etc. It didn't completely wipe out the sensation of being homesick, but it certainly made the transition much, much easier than it was at the times when my older brothers left home.

For all the downsides of social media, I do love the fact that it allows people (especially the youth) to maintain consistent contact with the people they love and the people they grew up with. The phenomenon started with AIM, which is why I'll always pay tribute to AOL through my email...not really, I'm just averse to any sort of change.

It's hard to fathom that this is still going on...a lot. 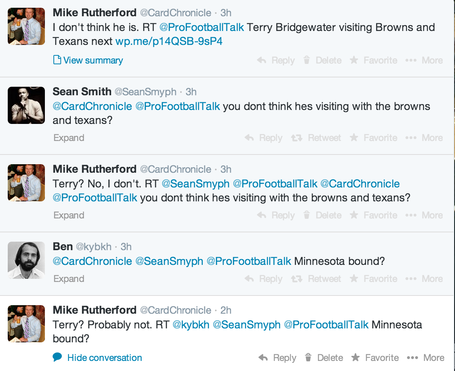 Maybe all these scouts and executives have been looking at film of Terry instead of Teddy. Because Teddy's pretty good.

But seriously, Teddy is visiting the Browns and Texans.

From Kenny Klein, Taquan Dean, Andre McGree and a blonde Russ Smith hanging out at the Yum Center this morning. 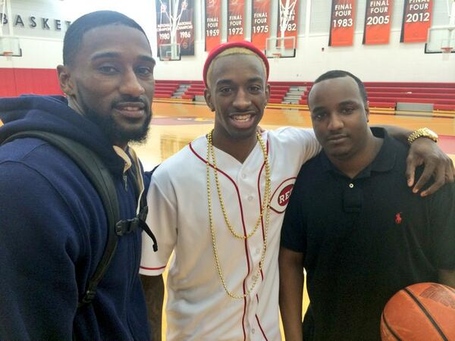 The Chicago Bears are the latest NFL team rumored to be targeting Calvin Pryor.

The Louisville women's lacrosse team spent its weekend clinching at least a share of the Big East title.

Basically, we're about to find out how we're spending a significant chunk of our 2015 and 2016 winters. It will be a big moment. pLan your mornings accordingly.