That's Campbell Grant spreading the good word while looking out over The Old City.

U of L held the first annual "Louie Awards" Wednesday night to honor the best in U of L athletics. Strangely, I was not asked to present the award for "Best Undefeated Freshman."

Worst awards show mistake since Letterman at the Oscars in '94.

Eric Wood was one of the presenters at the event, and made national news for welching on the best idea ever. He actually didn't make national news for that, but he did for fulfilling the wish of a fan who wanted him to autograph a jockstrap.

The Smoking Musket takes a look back at West Virginia's classic 2005 win over Louisville.

PSA: I am fully prepared to sub in for Miley Cyrus if called on this weekend. I just got a U of L medicine ball in the mail (true story), and I will not be afraid to use it appropriately. 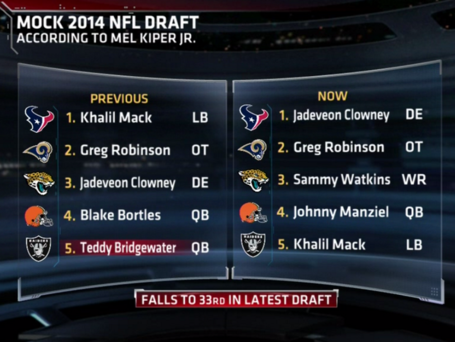 Shawn Watson, for his part,  isn't buying any of this.

"What's being said in the media is not necessarily being said in draft rooms by people who are being paid to be in the know and who need to do their due diligence and homework," says Texas assistant Shawn Watson, who served as Bridgewater's quarterbacks coach and offensive coordinator at Louisville. "I just know in the end, he has all the traits for a can't-miss player. I've seen his accuracy. I've seen his competitiveness, his decision making. I've seen how he's been such a great student, learning how to enhance his game, to use his eyes as a weapon, develop his feet, develop his pocket awareness, learn to be a full-field read guy, take us to the line of scrimmage and put us in the right play or spin our protection to pick up the blitz.

"He is what every college football coach dreams for, and I think the same could be said for the NFL because he can process a lot of information and keep it in the simplest form and make you right. I know he's got ‘it.' The ‘it' factor is just innately in his DNA."

In the three years they worked together, Watson and Bridgewater became as close as father and son, so yes, Watson is biased. But he also knows Bridgewater better than anybody doing the evaluating. When NFL executives have called to ask him about Bridgewater, he tells them simply: Turn on the tape.

"I said, ‘Listen, take out the big games in our program," Watson says. "Then look at the film. Look at both sides. When you walk away from the film, answer the question: How did that happen? Why did that happen? And you're going to go back to No. 5."

Louisville won't be seeing Jabari Parker next season in the ACC, as the Duke freshman announced his declaration for the NBA Draft via a Sports Illustrated post.

Kentucky's James Young has also made the expected jump to the next level.

Attention "Roger" who entered and won the CC Bracket Challenge: We have attempted to contact you through the email on your Yahoo account, but you have not responded. If you see this and would like to receive your prize package, please email me.

I'll never be able to fully put my love for Earl Clark into words. 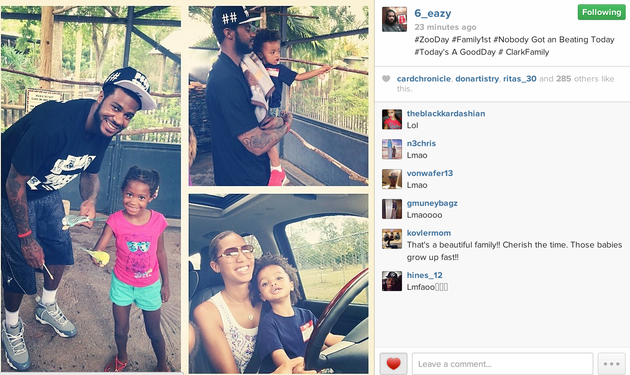 If you think there's ever been a better (improper) hashtag utilization than "nobody got an beating today," then you are sorely, sorely mistaken.

A closer look at the U of L offensive line.

Because of weather concerns, the Louisville baseball team is playing a double-header against Central Florida in Orlando today, and will play the final game of the weekend series either tomorrow (if weather permits) or Saturday. The Cards have the same number of league losses as the league-leading Knights, but have played an entire series (three games) less.

Sports Illustrated tabs Calvin Pryor as the 16th-best prospect in the 2014 NFL Draft.

SMU's Ulric Maligi is another name that has begun to circulate around the Interwebz as a possible addition to the U of L hoops staff.

Louisville lacrosse star Kaylin Morissette attended a high school without a lacrosse program, so she just decided to create one.

Back in Ontario, Morissette was a virtual player-coach. Women's lacrosse is still a relatively young sport in Canada, and her high school did not have a team. Instead of transferring, she took the unusual initiative of assembling a team at Bowmanville, which is 47 miles from Toronto.

The 10th-grader couldn't technically be the coach, so the school's field hockey coach assumed the role but was more of a supervisor.

Her start-up team was a success, winning the seven-school league championship in her junior and senior years. But being a coach, player and student wasn't easy.

"The day before prom I got hit pretty hard and had a turf burn on my left shoulder," Morissette said. "It was red and scabbed. It was on the shoulder that didn't have a strap. I just made my date stand on that side."

Tonight's Derby Festival Classic "Night of the Future Stars" featuring U of L signees Quentin Snider, Jaylen Johnson and Chinanu Onuaku will be streamed live on LiveSportscaster.com. The event starts at 7 p.m. inside the Floyd Central High School gym. Admission is free with a ticket to Friday night's game.

Once again, Luke Hancock and Russ Smith will be signing autographs in Lexington tonight. 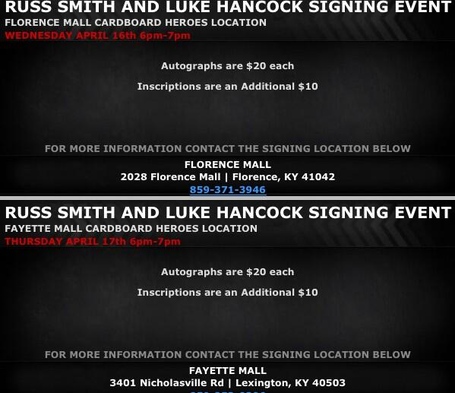 The winningest senior class in the history of Louisville women's basketball are now all professionals.

Indiana is willing to commit "extra resources" to keep assistant Kenny Johnson. Johnson is reportedly being courted by both U of L and Maryland.

Athlon ranks Will Gardner as the sixth-best quarterback in the ACC.

6. Will Gardner, Louisville (SO)

Replacing Teddy Bridgewater is a difficult task for any quarterback, but it appears the Cardinals are in good shape under center with Gardner. It's tough to read too much into spring performances, but Gardner's numbers in Louisville's spring game are certainly encouraging. The Georgia native completed 32 of 37 passes for 542 yards and four touchdowns in the Cardinals' spring game and is poised to have a huge season with Bobby Petrino calling the plays. In his first taste of FBS action last year, Gardner threw for 112 yards and two touchdowns on eight completions. With a solid group of receivers - including likely All-ACC target DeVante Parker - along with a backfield that features former Auburn standout Michael Dyer, Gardner has a good supporting cast in place. Petrino always finds a way to maximize his talent on offense, so expect Gardner to have a solid overall year in his first season as Louisville's No. 1 quarterback.

And finally, I'm back on the radio tonight from 6-8 on ESPN 680. I promise to talk too fast and use awkward words to avoid cursing.