The two greatest players in the history of Louisville women's basketball will be teammates at the professional level after the Atlanta Dream selected Shoni Schimmel with 8th overall pick at Monday night's WNBA Draft. In Atlanta, Schimmel will team up with former Cardinal All-American Angel McCoughtry, the only U of L women's player to score more points than Schimmel over the course of her four-year career.

Schimmel became just the fifth Cardinal, and the second woman, ever to score 2,000 points in her Louisville career when she breached the mark during her senior season. She left Louisville with 2,174 points, second only to McCoughtry on the women's side. Schimmel also finished her U of L career with 387 made three-point shots, five shy of the Division-I mark of 392 held by Kansas State's Laurie Koehn. 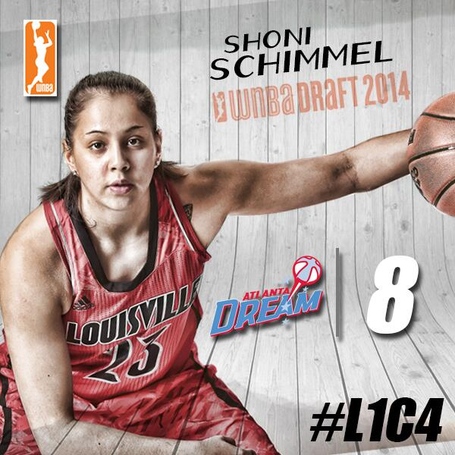 Congrats to Shoni and best of luck at the next level.