Share All sharing options for: Louisville Baseball Completes Weekend Sweep Of No. 7 Houston

The Louisville baseball team made its biggest and most important move of 2014 thus far by going down to Houston and sweeping a weekend series with the seventh-ranked Cougars.

The Cards (27-8, 7-2 American) finished off their fifth straight series triumph over a top 10 foe with a 10-3 trouncing at Cougar Field that dropped Houston to 26-9 overall and 4-5 in league play. Second baseman Zach Lucas was the offensive star, going 2-for-4 with three RBI, two runs scored and a stolen base. First baseman Grant Kay drove in two more runs, and freshman designated hitter Nick Solak scored three times. 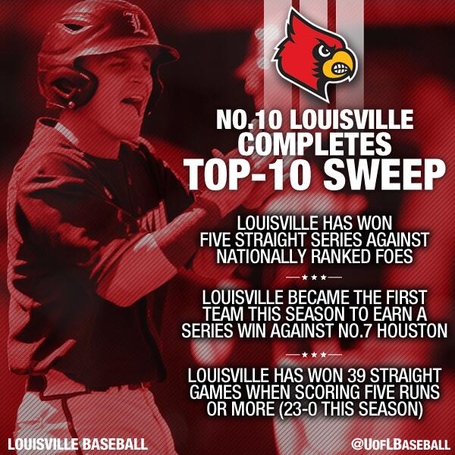 Sophomore righthander Anthony Kidston improved to 3-0 on the season after finishing with six strikeouts and allowing three runs on six hits over 5.1 innings. Kyle McGrath extended his career-best scoreless streak to 22.2 innings after working three shutout innings to keep the Cougars from rallying.

Louisville outscored Houston 17-7 in the three-game series, and held the Cougars to just 19 total hits. Perhaps the best indication of just how enormous this weekend was for U of L is the fact that their RPI jumped from No. 52 on Friday morning to No. 27 at the moment.

Next up for the Cards is a Tuesday night rematch with arch-rival Kentucky inside at Jim Patterson Stadium. First pitch is set for 6 p.m. and a few tickets are still available for what will undoubtedly be a sellout. U of L fell to the Cats in Lexington on April 1.