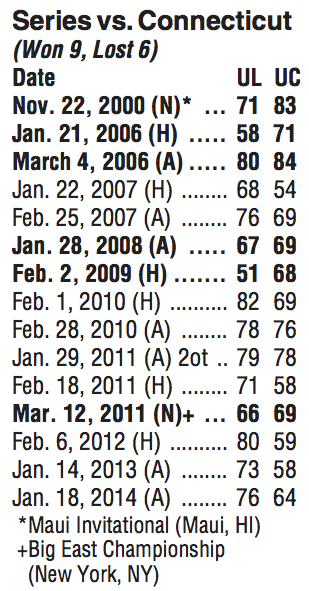 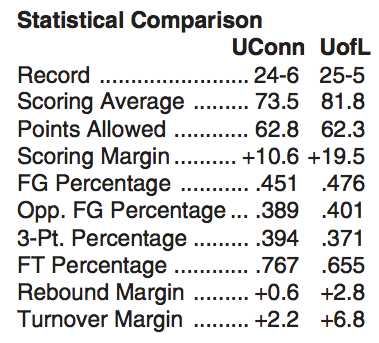 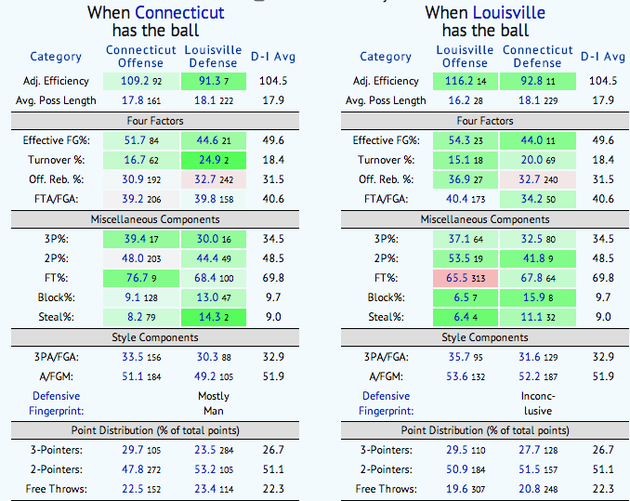 The Huskies, who have won three straight and seven of eight, are coming off a 69-63 victory over Rutgers on Wednesday. They head into the final game of the regular season in a tie for third place in the AAC with SMU, but lost both games to the Mustangs.

--Louisville will be bidding farewell to seniors Russ Smith, Stephan Van Treese, Tim Henderson and Luke Hancock. Fans are asked to be in their seats by 1:40, at which time the senior day ceremonies will begin.

--Saturday's game has also been dubbed a "Red Out," and Cadinal fans attending are asked to wear red.

--Having won 115 games since the start of the 2010-11 season, this group of seniors represents the winningest class in the history of Louisville basketball.

--A win by Louisville on Saturday will guarantee the Cardinals at least a share of the American Athletic Association's regular season title. If U of L wins and Cincinnati loses to Rutgers, the Cards will win the title outright.

--Connecticut is 6-3 in true road games this season, and 4-2 against ranked opponents.

--Louisville has won 14 of its last 15 games on Senior Day. The Cards' lone loss over that span is a 2012 loss to South Florida.

--Louisville is 2-0 against Connecticut inside the KFC Yum Center.

--Russ Smith is 61 points away from cracking the top five of Louisville's all-time scoring list.

--Rick Pitino is 13-11 all-time against Connecticut.

--Louisville is second in the nation in turnover margin (+6.8) and is 25th in fewest turnovers per game (10.4). U of L has committed 10 or fewer turnovers in 20 of its last 33 games dating back to last year. The Cardinals are generating an average of 21.7 points per game off turnovers.

--Louisville is favored in tonight's game for a program-record 42nd straight time. The Cards have not been an underdog since playing at Syracuse on March 2, 2013. All told, U of L has been the favorite in 70 of their last 71 games.

--Louisville's 25-5 start is the second best of the Rick Pitino era and the same record last season's national championship team had through 30 games.